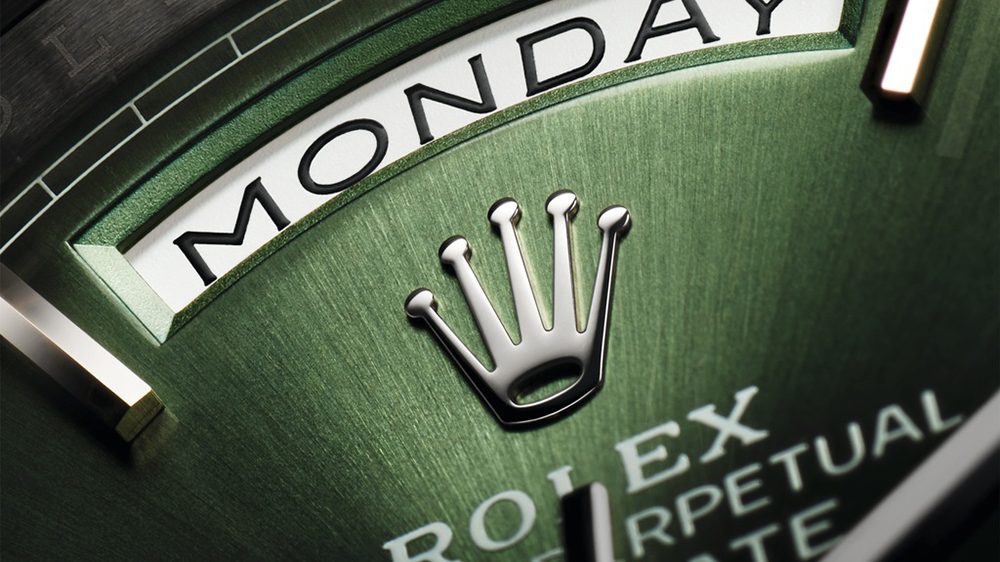 So you saved up for your first Rolex, and you decided to go the “vintage” route. But now, a problem — what the hell are all these weird terms and phrases being bandied about? “Frog foot” and “gilt” and “tropical” and “Bart Simpson”—it sounds like the frenzied mutterings of some drunken cartoon character in a contemporary production of Alice In Wonderland. How exactly does all this relate to watches, and to Rolex watches, more specifically?

Here’s the thing: Rolex aficionados love this stuff. It’s like a secret, coded language that signals that someone else is an insider, that that person loves horological esoterica as much as the next nerd. But it’s also not that complicated, for a variety of reasons, not least of which is that we’ve compiled a cheat sheet for you. Now, the next time you see that vintage-watch dealer, you can be sure that you’ll be on an equal footing. Kinda. At the least, they’ll know that you are someone who cares enough about the subject to sweat the details.

NOTE: If you’re looking for a guide to Rolex nicknames—i.e. the nicknames of different watch models—click here. What we’re cataloging here is the language of the obsessive and the collector. Think of it as the only Rolex glossary you’ll ever need.

2-Line: A dial with only two lines of text above the 6 o’clock marker, such as certain Ref. 14060 Submariners without denoted Chronometer certification. Some prefer the uncluttered looks of these dials.

4-Line: A dial with four lines of text. On a Ref. 14060M Submariner, for example, this would add the chronometer certification to the model name and depth rating.

Bark Finish: A feature of certain President bracelets in which the gold material is etched to look like bark.

Cyclops: A watch crystal with a built-in magnifier for the date, first released in 1948 on a Datejust model and patented in 1952. Originally these were made of acrylic and were part of the crystal; later (and current) sapphire models feature a Cyclops manufactured separately and affixed to the main crystal.

Double Swiss Underline: A particular dial on the first Daytona Ref. 6239 that features an underline beneath the word “Cosmograph” and two “SWISS” signatures—one above the 6 o’clock marker, and one below the minute track, which is partially covered by the watch’s rehaut.

Eagle Beak: A crown guard style found on certain Ref. 5512 Submariners from the late 1950s/early 1960s in which the guards are shaped like eagles’ beaks. (As opposed to the square style that preceded them, or the pointed style that followed.)

Explorer Dial: A dial featuring the Explorer I’s distinctive mix of dash, Arabic and triangular markers. This dial appeared on certain earlier Submariners such as the Ref. 6200 and certain 5513s.

Feet First: A dial in which the depth rating begins with feet rather than meters, i.e. “660ft=220m.” This may indicate that the watch in question—generally a Sub—was destined for the American market, but this is collector guesswork.

Frog Foot: A particular type of Rolex coronet (crown) found on certain Rolex sport watches (reference 1016s, 1655s, etc.) made in the late 1960s through the mid-1970s, in which the coronet is wider and looks like the foot of…well….a frog.

Ghost Bezel: An aluminum bezel in which the coloring has faded—especially from black to blue or grayish.

Glossy Gilt Dial: A type of early Rolex dial in which the underlying brass dial blank is exposed, yielding text and other features (such as minute tracks, etc.) that looks golden in hue. These types of dials were eventually replaced by matte, and then by glossy dials with white printing and applied white gold surrounds.

HEV: The “helium escape valve,” which features on certain Rolex Professional models such as the Sea-Dweller. This one-way valve allows helium molecules to escape the watch during decompression, which prevents the crystal from flying off the watch. (Yes—this is an actual problem—if you’re a saturation diver.)

Matte Dial: A dial in use on Rolex sport watches (and others) from the mid-late 1960s through the mid-1980s. These did away with the “gilt” printing of the earlier gilt-gloss dials and instead featured a flat black surface with white text and painted tritium indices.

Mercedes Hands: This is a unique Rolex handset featured on many references whose minute hand has a round portion divided into three equally sized portions—much like the Mercedes logo. (The first Sub to feature this handset is the Ref. 6204 from 1954.)

Neat Font: A dial style in which the printing is executed in a script that has been described as more standardized and “neater.” (Older Subs often feature printing that looks distinctly hand-drawn and messy.) Certain Ref. 5512 Subs feature such dials.

Oyster: A highly water resistant case with a screw-down crown and screw-down caseback released in 1926 and featured on most Rolex watches ever since. (Currently, only the dressy Cellini doesn’t feature an Oyster case.)

PCG (Pointed Crown Guards): A crown guard style in which the crown guards are pointed, as opposed to squared or “eagle’s beak” guards. These can be found on Ref. 5512 Subs from roughly 1959-1963.

Small Crown: This term generally refers to early Subs that featured a smaller winding crown, such as the references 6204, 6205, 6536/1, and more.

Spider Dial: A type of glossy dial in which the lacquer coating has developed fine cracks, aka “crazing,” resulting in a spider web-like appearance. Though a definite defect, certain collectors are attracted to this look.

Stella Dial: A brightly colored, lacquered dial found on certain Day-Date watches from the 1970s and made for Rolex by a company called Stella. These were primarily meant for the Middle Eastern market.

Swiss Exclamation Point Dial: A dial in which a small, circular lume plot below the vertical, rectangular one at 6 o’clock forms what looks like an exclamation point, which is joined by a “SWISS” signature below the chapter ring. This dial featured on Subs, Explorers, and GMT-Masters in the late 1950s/early 1960s for a time.

Super Case: Sometimes mistakenly called a “maxi case,” this describes a Submariner or GMT-Master II case with fatter lugs and a larger bezel, giving the impression of a larger watch even though certain Super cases measure 40mm in diameter like their predecessors.

Tapestry Dial: A dial that features vertical ridges. Sometimes found, for example, on 5-digit Datejusts from the late 1970s/early 1980s.

Tropical: A black dial that has turned brown due to degradation of the paint used, possibly due to UV exposure, humidity, moisture, etc. These dials are highly desirable if even in their coloration.