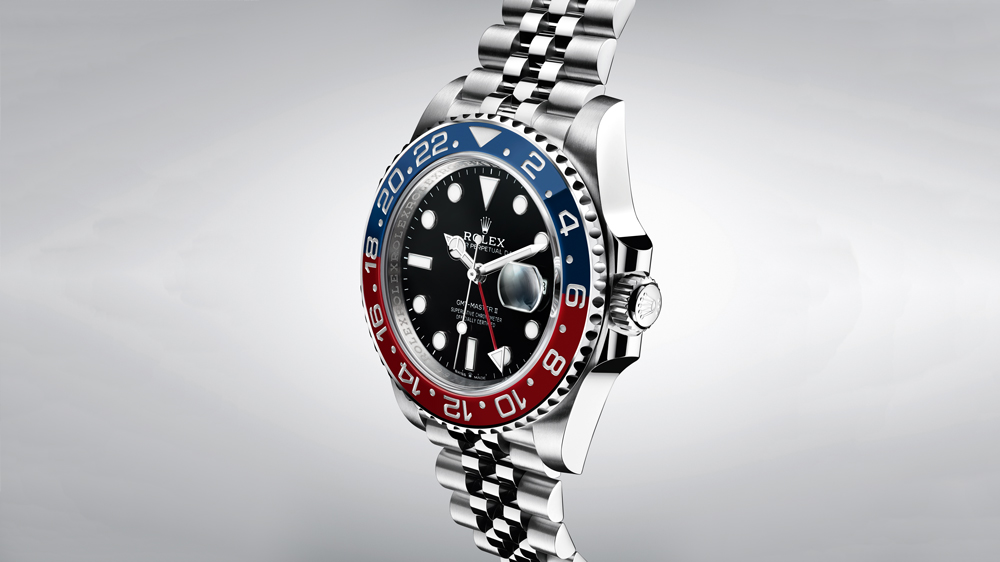 But more than just a wrist expander and a friendly new price point, this 40 mm Rolex Pepsi GMT-Master II also comes outfitted with a new caliber for an extra pop. The new 3285 caliber gave birth to 10 patent applications during its construction and features Rolex’s patented Chronergy escapement (which first debuted in the calibre 3255)—a modification of the Swiss lever escapement that is designed to improve efficiency by 15 percent, allowing for additional power reserve at 70 hours. The previous version of the GMT was equipped with the Caliber 3186 and did not come with the Chronery escapement and therefore had a power reserve of only 48 hours.

The GMT-Master, a Rolex icon, was first introduced by the watchmaker in 1955 for Pan Am pilots to keep track of time zones as they began to fly more transatlantic flights. To track a time zone, the pilot could set the timepiece’s fourth hand with the 24-hour bezel to a second time zone. The original Pepsi bezel was made from Bakelite, a popular material of the era that constantly got damaged forcing Rolex to replace it with metal starting in 1956. The Pepsi bezel has been made in ceramic since 2005 through Rolex’s patented Cerachrom process allowing for two colors to be produced as a single piece. The red hue of the bezel is a notoriously difficult color to develop in ceramic and Rolex’s process resulted in several patents.

The hype of the new GMT-Master II however, isn’t just about the Pepsi version. There was some buzz about the handsome new “Root Beer” version (price upon request), with a brown and black bezel, in Everose gold on an Oyster bracelet. Everose, Rolex’s proprietary version of Rose Gold with a small amount of platinum, undoubtedly adds a level of bling to this watch for those looking to highlight their GMT-Master ownership. Rolex also debuted a Oystersteel and Everose GMT-Master II Root Beer with an Oyster bracelet ($14,050). But in keeping with the theme of this year’s watch releases, classic icons at even the most traditional luxury watchmaking manufactures were being introduced at more approachable price points, but the GMT-Master II Pepsi took all the fizz.