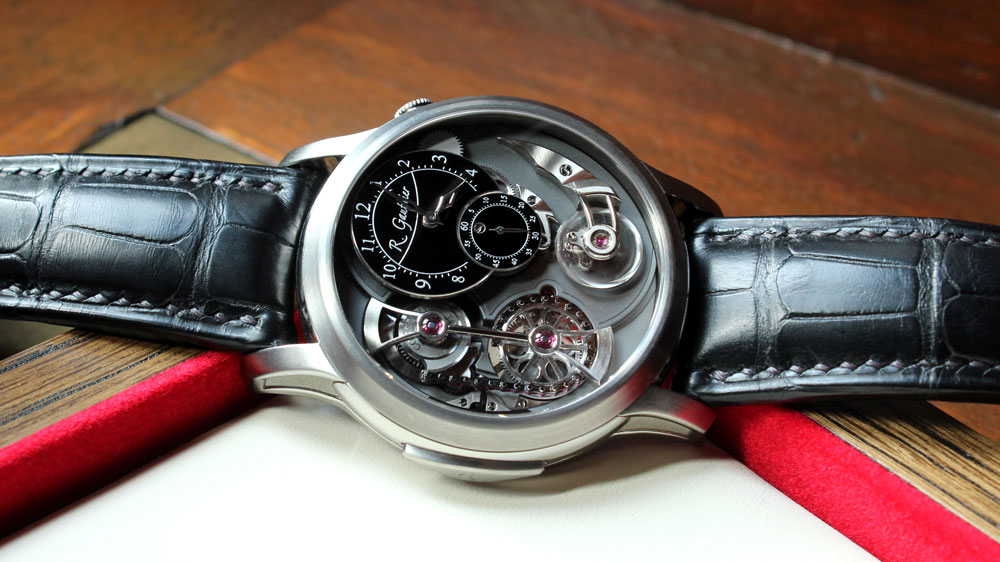 With the general softening the watch industry has experienced in recent years—one that appears to be (thankfully) turning around—finding a watchmaker or brand truly willing to push boundaries became much more difficult than in years past. The Romain Gauthier Logical One, a watch that first launched in 2015, was one of few to buck the trend.

Romain has been running his own operation since 2005, and now produces roughly 60-70 watches a year, as well as assisting in movement manufacture for other brands (he was responsible for creating the movement in the Monsieur De Chanel, among others). In creating the Logical One ($104,000 based on current exchange), Romain opted to reinterpret the classic fusée-and-chain mechanism as part of his constant force escapement, and the best part is that this was just the tip of the iceberg. Two years after its creation, the piece remains in high demand, giving us all the more reason to plan a closer look in this week’s Watch of the Week feature.

To simply write off the Logical One’s aesthetics as “industrial” would be remiss. Romain’s keen eye for design and appreciation for texture ensures that the Logical One is a mesmerizing creation, to say the least. In one corner, a jet-black enamel dial takes care of time indication. In the other, the flat-link chain features ruby rollers are a marvel of micro-engineering, and the assortment of exposed bridges showcase Romain’s hand-finishing prowess.

It’s safe to say that the overall appeal of the Logical One isn’t solely hidden under its crystal. Though its case is relatively traditional, it is also far from boring. Textured cut-outs on the flanks of its lugs, and soft organic curves are the result of hours upon hours of delicate machining and polishing. For reasons both practical and aesthetic, its compact and near-hidden crown lives in the upper right corner of its case rather than the traditional 3-o’clock position, and a large pusher (more on that later) resides at 9.

Albeit a simple watch from a time telling standpoint, its inner workings are far from it. Romain’s approach to the traditional fusée-and-chain mechanism—a system created to even out the power delivery of the movement’s mainspring—is anything but conventional. Where other brands have used a conical gear to spool the chain, Romain instead resorted to a snail cam, which allows the chain to remain on the same plane as it slowly transfers the mainspring’s power. What’s more, his use of sapphire rollers both limits friction, and removes the need for lubrication and additional fuss during servicing.

Just in case this wasn’t fascinating enough on its own, Romain also engineered a unique means of winding the movement via a pusher on the left side of the case. To be fair, the addition is by no means more efficient than conventional winding, but nonetheless an interesting addition that isn’t without its charm. According to Romain, each push amounts to roughly 45 minutes of power reserve, with the idea being that the wearer would take the occasional moment of down-time in their day to add a few hours here and there, rather than depleting the 46-hour reserve, and then having to wind it all the way back at once.

Being clad primarily in greyscale, this variant of the Logical One won’t be shy on pairing options. It’s understated enough to work with any of the new Drake’s Easyday suiting collection, just as easily as it can work with a more edgy premium denim from the PRPS Noir line we covered recently. In short the Logical One is a shockingly versatile piece, and even though it seems a bit avant-garde at first glance, it’s not so far outside the box that it would detract from more conservative attire. What’s more, its lightweight titanium case makes it extremely easy to wear throughout the day.

As it stands, Romain Gauthier has little in the way of stateside retail presence (though his watches can be found through Martin Pulli in Philadelphia, who we wrote about recently). That said, inquiries can also be made directly through the brand.