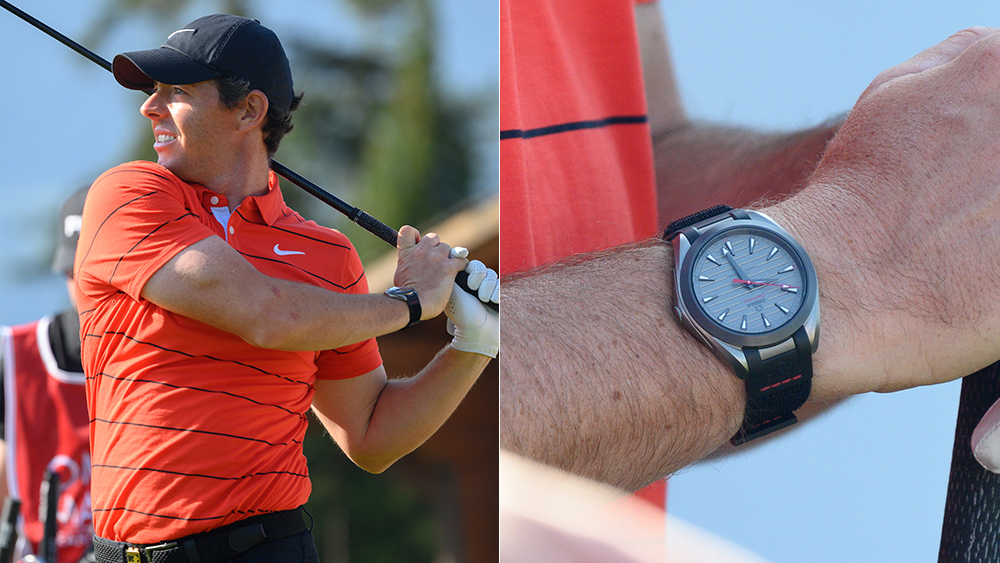 Fresh off his big win at the FedEx golf championship, which included pocketing a whopping $15 million in winnings, Rory McIlroy debuted a new watch he designed in collaboration with Omega at the European Masters—a golf tournament sponsored by Omega in Crans-Montana, Switzerland. The four-time major champion was on the green this week in Crans showing off his new Seamaster Aqua Terra “Ultra Light”, an impressively lightweight time-only watch that he and fellow Omega ambassadors Sergio Garcia and Tommy Fleetwood wore during the tournament.

“When Omega first brought up the idea of designing a watch that I could maybe wear on the course and play with, you know, I was all for it,” McIlroy told press at the sporting event. “But my thing was, if you really want my input, you have to listen a little bit more because I can feel a one- or a two-gram difference in a golf club or a golf shaft when I swing it.”

As a result, the new Seamaster Aqua Terra was specially developed in Gamma Titanium, a new material the watchmaker developed especially for this new timepiece. The material, often used in the aeronautical industry, is made with roughly 33 to 36 percent aluminum to make the titanium even lighter and harder. But Omega didn’t stop with the case, it went full swing by making the movement in Gamma Titanium (a brand first) and reduced the amount of material used to create the dial. The watch ultimately weighs in at 55 grams. “In order to make the watch very light, we had to take every single bridge and create them in Titanium, in order to work on each and every single gram,” said Omega CEO Raynald Aeschlimann.

It also comes with a hidden telescopic crown (another brand first), which pops out of the case when it needs to be used and stows away when it’s game time so that the golfer’s wrist doesn’t get affected while in motion. It also doesn’t affect the manual-winding caliber 8928 with a co-axial escapement and master chronometer. It comes with a clean dial with an hour, minute and second hand, and no date window. It will set you back $48,600 when it becomes available in December (it is not limited, but will be made in small quantities initially).

The pricetag has already sent the social media sphere into a frenzy. It’s a hefty price tag for a brand like Omega, and it has elicited comparisons as a more affordable Richard Mille (the RM038 made for pro-golfer Bubba Watson in grade 5 titanium cost $650,000 when it came to market in 2012). But Aeschlimann insists that the price is not without merit: The brand had dedicated an entire team to its creation, which was two years in the making, and the first time Omega worked with this material.

“I don’t like to call it this, but in the car industry they have what they call an exposition model, or the very first one, but I think this watch has its own value and deserves exactly that price because it’s all about incredible technology, new materials and of course, a lot of manufacturing to make it half the weight of a normal watch,” Aeschlimann told Robb Report. That’s also why it doesn’t come with any other bells and whistles like a date window (which for some watch purists is already a deterrent to purchase) or chronograph functions, because it needed to be as lightweight as possible.

“There have been a few people that asked me how the watch is and it’s so light I forgot I was wearing it, which is a massive compliment to the watch,” said Fleetwood at the tournament. McIlroy’s input on the watch design, began roughly 18 months ago according to the golfer, and his requirements ranged from not only the weight, but also details like glare reduction, ridges for the crown and a new strap.

Surprisingly, the latter was the hardest part of the timepiece’s production and might be the watch’s greatest feat in terms of easy wear. It incorporates a technology used by Apple that integrates the velcro into the fabric of the strap itself, instead of a separate attached entity. According to Omega, it was a big challenge to develop the strap up to par with its standards. “The price is on a high level for an Omega watch,” admits Aeschliman. “But if you take it piece by piece and if you hear about everything that we’ve been investing, then it’s a watch that deserves this price.”

Aeschlimann says you can expect to see the new material in other Omega watches. “For us, this is part of our very rich history, a very rich evolution, and we’re very thrilled about having now mastered all this new technology and new components.”

Part of that rich history at Omega is taking the time to both commit to and develop talent internally and externally. Aeschlimann began his career as an intern at Omega, and a striking number of its corporate employees have been with the company for multiple decades. Meanwhile, Cindy Crawford, has been a brand ambassador for 25 years, and her family has since been inducted into the Omega family. Sticking with the people the company believes in seems to have paid off in spades—the brand is hotter than ever and its ambassadors are taking note of Omega’s unique approach.

“There are a lot of companies that sponsor a lot of players and you’re just one of many,” Fleetwood said. “I was a little bit stubborn when I turned pro, because the number one thing when you turn pro is to have a watch sponsor. I was kind of like, ‘I don’t want to do that, because everybody does that. I’m not trying to kiss Omega’s ass here, but I think when people see you’re associated with a brand that has so few ambassadors and is very specific with who they want, I think it does a world of service and I’m grateful to be part of that.”

While Fleetwood is a newly signed ambassador, McIlroy has been a part of the Omega fold since 2013, well before he was gold on the green. “Why is Rory so incredibly well established in our family? Because he represents us—he’s the best, but it’s also about the way he is as a person his private life, in the way he’s talking, in the way he’s behaving and also in the way he’s working with us,” says Aeschlimann. “There’s always this dedication to few, but great partners. This is, for me, exactly what we do.”9.4