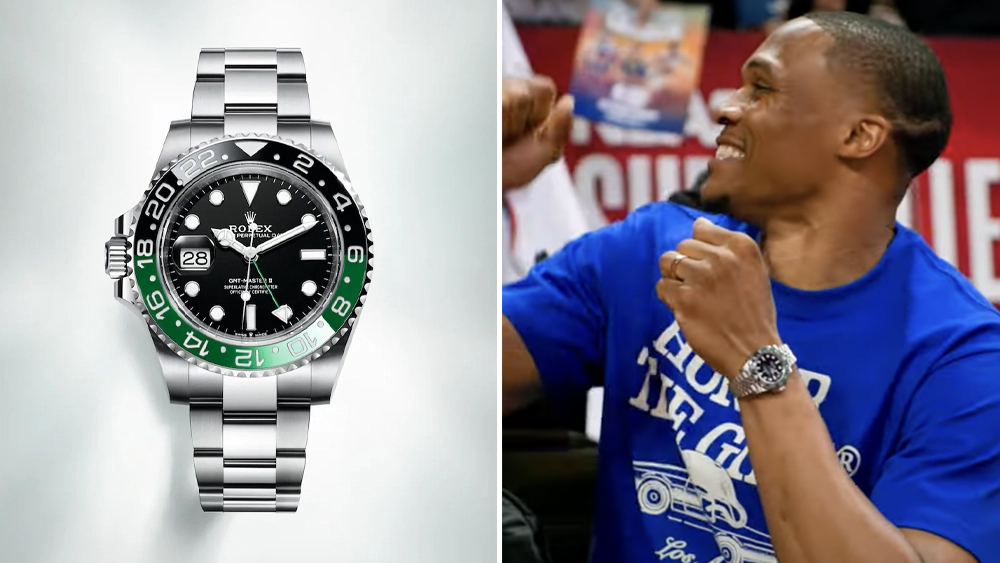 Russell Westbrook rocked one of the hottest watches of the year to the NBA Summer League.

The legendary Lakers guard turned up to a match between his team and the Suns in Las Vegas on July 9 with a new Rolex Oyster Perpetual GMT-Master II on his wrist. The coveted timepiece was one of five new models released by the Crown at Watches & Wonders in late March.

The GMT-Master II was first introduced in 1983 as a successor to the iconic GMT-Master. The pilot watch, which is designed to show the time in two time zones simultaneously, has since been through several iterations. The latest version is a slam dunk for a few reasons, though.

First and foremost, the crown and crown guard have been placed on the left side of the 40 mm case. This makes the piece particularly suited to left-handed folk like Westbrook. (The NBA star shoots with his right hand, but is a natural lefty.)

The watch sports a distinctive colorway, too. The Oystersteel case and bracelet are complemented by a green and black monobloc Cerachrom bezel insert in ceramic and a black dial. (It’s the first time these colors have been combined for a Rolex GMT.)

In addition, the date aperture and the Cyclops lens have been moved to 9 o’clock. According to the Swiss watchmaker, this selection of seemingly small changes led to some quite tricky technical tweaks in terms of the movement and the Superlative Chronometer certification.

Speaking of the movement, the Caliber 3285 features a Chronergy escapement and a guaranteed power reserve of approximately 70 hours. It is also equipped with a Parachrom hairspring for greater resistance to shocks and temperature variations.

As you might expect, the GMT-Master II and the four other new Rolexes may already be sold out or reserved for collectors who have relationships (and a history of spending) with authorized dealers. If you want a take a shot at picking up Westbrook’s wrist candy, though, it’s priced at around $11,550 with the Oyster bracelet and $11,800 with the Jubilee bracelet.