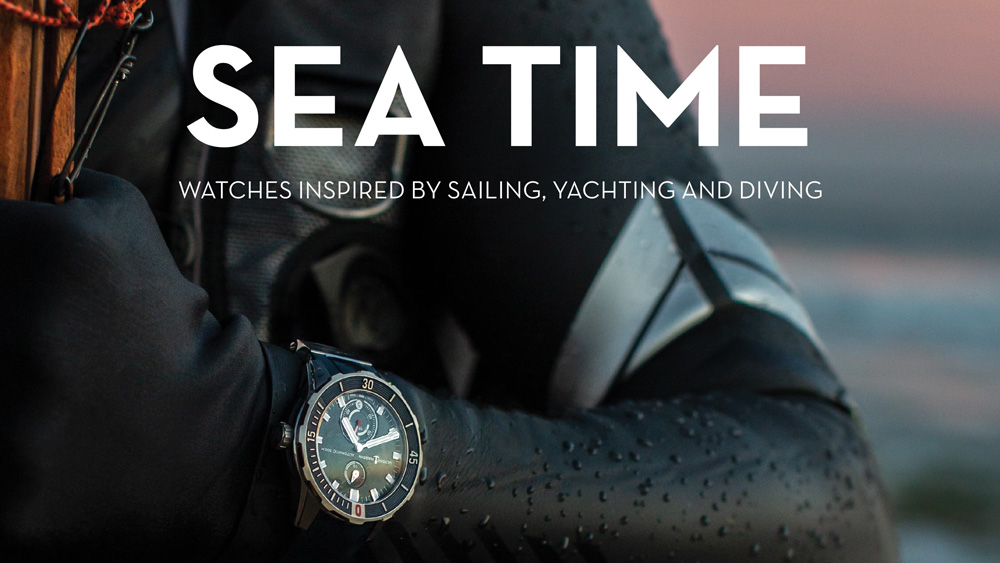 Looking for a watch to accompany you on your jaunt to the Greek Isles this summer, or perhaps aboard your next long-haul expedition aboard your explorer yacht? Look no further than longtime watch journalists Aaron Sigmond and Mark Bernardo’s new Rizzoli tome, Sea Time.

The book, which came out this month, is an expansive guide to watches made for the open seas—or, for some collectors, worn on the beach. “A couple of people that follow me on Instagram say they think of it as their shopping list,” says Sigmond laughing. “That’s pretty impressive.”

Sea Time is Sigmond’s seventh book on watches (he’s currently already working on his eighth) and it is a follow-up to his other Rizzoli book Drive Time, which focused on watches made for the road. Naturally, you can expect Air Time to complete the trilogy.

Sea Time begins with a deep dive into the history of waterproof watches made for seafaring starting in the ’20s including the stories of Rolex, Panerai, Blancpain and Doxa’s historical strides in making watches equipped to withstand unprecedented depths. Another chapter on these icons and more explains why they remain at the top of the pack many decades later. “We put so much curation into this book,” says Sigmond. “For example, Mark and I had very long conversations about the icon chapter, which is in all three books. At first, I was extremely on the fence about including Patek Philippe, not because they are not an exceptional watchmaker, but is a Patek Philippe truly emblematic of a dive watch? It’s really more about design. Mark felt pretty resolute about putting them in the icons chapter, so we included them there but not without serious consideration.”

That level of curation went into each chapter, which categorize the watches based on diving, sailing and regatta, boating, and pool and shore watches. Sailing watches include timepieces like Bremont’s AC Regatta Oracle Team USA, a watch developed for Oracle Team USA in 2016 (after Tag Heuer ended their sponsorship after the team won the Auld Mug Trophy in 2013) to Panerai’s Luminor 1950 Regatta 3 Days Chrono Flyback Titanio with a new countdown function added to the movement’s flyback chronograph movement (because they don’t just make dive watches). Timepieces like Breguet’s Marine Équations Marchante 5887 to Franck Muller’s Vanguard Yachting watch are among those that comprise the poolside pieces—watches inspired by the seas but not the kind you would want to risk trying out on your extreme water bound adventures.

In addition to tightly curating the selection, Sigmond says he also took great care to present the full breadth of sea watches available today. “I always try to be egalitarian about it and try to include watches that are somewhere around the $1,000 watch up to watches that are right around $1 million,” says Sigmond. “If somebody wants a book only on Rolex Subs, that’s great, but that’s not what this is. I spent a tremendous amount of time curating this, so I have even made sure that there are not only Swiss watches, but there are German watches, French watches and American watches. That was very intentional.”

So what are Sigmond’s favorite dive watches after compiling 233 pages of timepieces for Sea Time? He breaks it down for us below.

“The very last watch that we included in the book was the Ulysse Nardin diver, which came out in October or November of last year, and the book was gone. It was actually going on its way to the printer—they hated me at Rizzoli for this—but I killed a spread and wrote it up in a day and put that in. I love that watch. Ulysse Nardin has a remarkable naval and nautical history and I’m really, really glad we included it.”

“I think what Georges Kern is doing at Breitling is just amazing and remarkable. He’s going back to the archives, but he’s doing it right. Nothing feels old and fussy. It looks new but it has that retro appeal.”

“In a move long overdue, in my opinion, Panerai spun off the Submersible as its own collection, apart from its parent Luminor family (p.87), this year. The clear hero of the collection is this limited-edition, with black DLC case, gradient blue-to-black dial with turquoise details.”

“Last but not least, the Bulova 666 Double Diver Limited-Edition, which I actually own. People ask me about it all the time, most of them didn’t know that Bulova did these incredible dive watches in the ’60s and ’70s. It’s a really nice reissue or reproduction.”