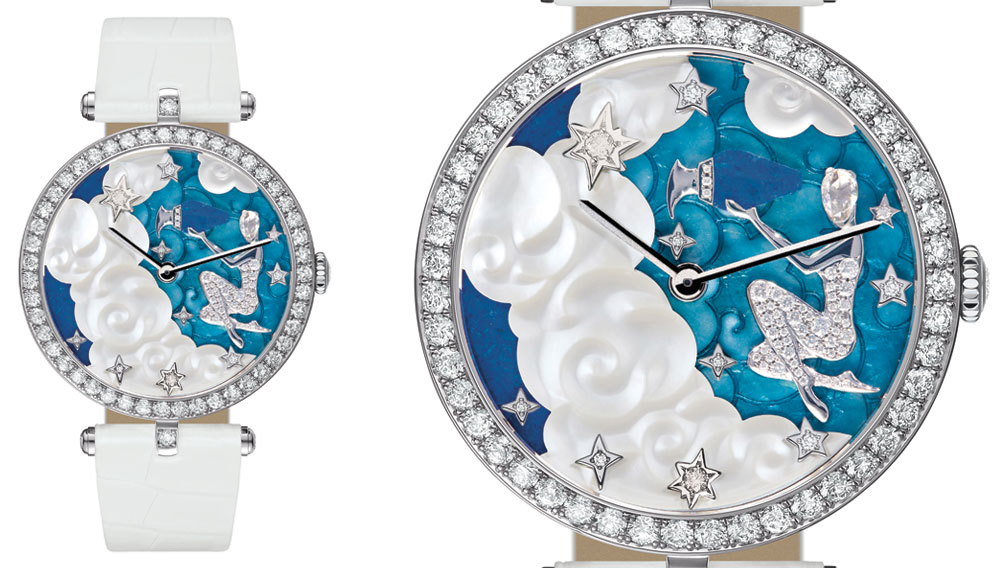 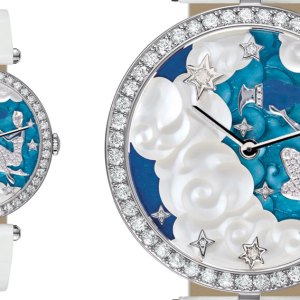 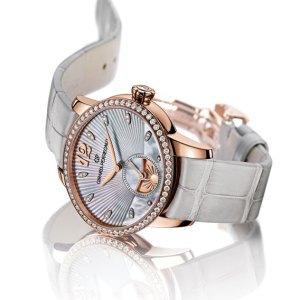 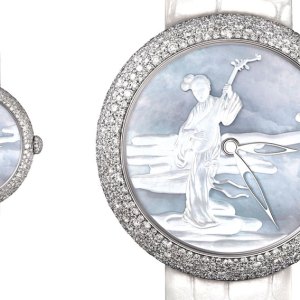 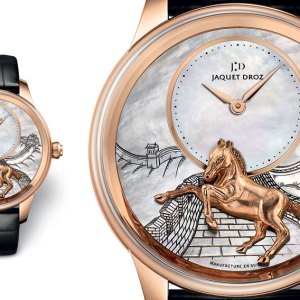 In some ancient cultures, the luminous nacre that lines the shells of pearl-producing mollusks was more treasured than the pearls themselves. For thousands of years, this iridescent, organic material composed of calcite and aragonite has been used to decorate swords, furniture, objets d’art, and, of course, fine timepieces. As in many facets of contemporary watchmaking, advanced technologies are making an impact, amplifying artists’ visions and pushing the boundaries of classical métiers to tell a thoroughly modern, artistic story that draws on tradition.

“With today’s highly precise machining tools, mother-of-pearl can be very easily machined and engraved to take any special form to be included in a dial,” says Olivier Vaucher, an influential métiers d’art specialist for many esteemed brands such as Cartier, Vacheron Constantin, and Van Cleef & Arpels. “Mother-of-pearl can be fitted into a modern-spirit design or integrated on an old-style dial.”

For Vaucher, using mother-of-pearl in a modern context involves experimenting with various types of shells in a painter’s palette of colors. “The aim of using mother-of-pearl is to take advantage of the shine and the light it brings to a dial,” he says. “Even when painting on it, the artist will play with the high and low reflective effects to make the result brighter.”

Louis Vuitton also uses marquetry to create the graphic center of its Damier Absolu, with tiny tiles of mother-of-pearl arranged in a radiating checkerboard pattern. The dial is framed by three rows of invisibly set baguette-cut diamonds in graduating sizes, echoing the dial’s moderne design.

Engraving is a fairly common method used to heighten interest and dimension in mother-of-pearl, although artisans must take care as the material can be quite brittle and delicate. Jaquet Droz’s Petite Heure Minute 35 mm Mother-of-Pearl puts a modern twist on a typical engraved linear sunray dial by studding it with eight rhodium-finish stars. Girard-Perregaux also favors a traditional sunray guilloche pattern on the mother-of-pearl dial of the Cat’s Eye Day and Night, with its teardrop-shaped diamond hour markers.

This year’s showstoppers, however, make bolder artistic statements with engraving. Laurent Ferrier, for example, debuted its first women’s pieces, the Lady F collection, with dials in Tahitian or light-blue mother-of-pearl that are beautifully engraved with a spray of waves and arabesques.

Meanwhile, Chanel expanded its exquisite Mademoiselle Privé Coromandel collection, inspired by Coco Chanel’s beloved Japanese lacquered screens that were showpieces in her Rue Cambon apartment. This year, a pair of the watches convey a delightful yin-yang effect with one depicting a lyre player finely rendered in the typical Grand Feu enamel, while the other ethereally mirrors the scene engraved in white mother-of-pearl floating on a blue mother-of-pearl background. Shimmering snow-set diamond cases frame both artful dials.

Dior’s designers were also intrigued with a traditional Japanese art form, that of origami. In what is perhaps the most fresh and innovative use of mother-of-pearl this year, artisans applied marquetry methods to mimic overlapping folds of paper, which also call to mind couture fabric folding techniques practiced by the famed Paris fashion house. The multidimensional dials, created through layers of overlapping mother-of-pearl inserts, are built over the course of 50 hours. The five one-of-a-kind pieces in the Dior Grand Soir range each feature a different gemstone for the triangular stones sprinkled on the dial and the distinctive, invisibly set baguette-helix gems that cover the bezel.

Asian themes are a natural fit for mother-of-pearl watch designs as the material has a long and prominent history in the culture’s decorative arts. At Jaquet Droz, which has an entire department devoted to métiers d’art, the Petite Heure Minute Relief Horse pays tribute to 2014’s Chinese zodiac sign. The dial portrays an engraved red-gold rearing stallion atop the Great Wall of China, which is finely engraved and patinated in the shimmering mother-of-pearl. “To give modernity to the mother-of-pearl, we use it in unexpected ways,” says Christian Lattmann, Jaquet Droz’s vice president. “In our timepieces, the material is also painted and engraved, and we also combine it with minerals such as onyx and lapis lazuli to create a strong contrast. Most of the mother-of-pearl dials are handmade, so here it is not a question of technology as much as inspiration.”