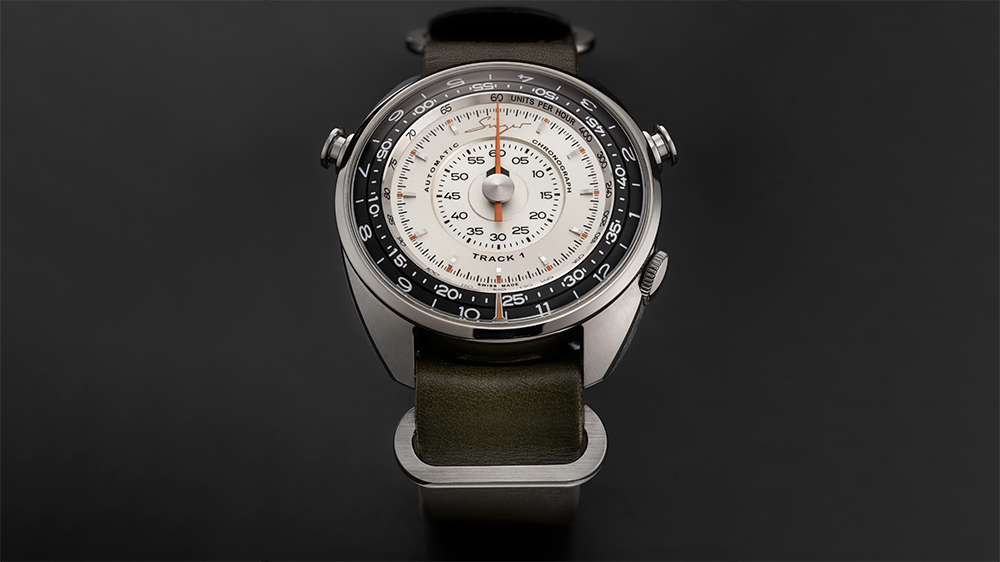 It’s always good to stretch yourself and try something new. Just ask Singer Vehicle Design. Best known for its custom air-cooled Porsche 911s, the company’s founder Rob Dickinson decided to give watchmaking a try a few years ago. The result was a striking chronograph dubbed the Track 1 Launch Edition. And now that watch’s prototype is going up for auction.

The rare timepiece from Singer Reimagined—a sub-brand of the Los Angeles-based custom specialists—is set to hit the block as part of Phillips’s Geneva Watch Auction XI later this month. But the watch doesn’t just represent an important piece in the Track 1’s development process; it’s also the only prototype that was ever made.

Dickinson teamed up with watch designer Marco Borraccino, master watchmaker Jean-Marc Wiederrecht of Agenhor and Singer Reimagined, and the Track 1 was the brand’s debut timepiece. First introduced in 2017, it’s a chronograph with a stylish, retro-inspired design that harkens back to the 1970s, while its dial looks ripped directly from the dashboard of a Porsche 911. Adding to its allure is the fact that the finished watch was limited to an initial run of just 50 examples.

The prototype features a stately 43 mm case made of titanium and a leather NATO strap. But it’s the Track 1’s intricately detailed face that sets it apart from other chronographs. In the center of the gauge-like white dial are two centrally mounted hands, the smaller of which marks the minutes, while the larger marks the seconds. Meanwhile, time is told via two aluminum rings surrounding the dial that rotate clockwise to indicate the hours and minutes thanks to an orange marker at 6 o’clock.

Inside the watch, the tech is just as impressive. The chronograph is powered by an innovative movement developed by Widerrecht—a beautiful piece of horological engineering that features 67 jewels and is visible through the watch’s clear case back. And to make sure you get to see it in all its glory, the watch’s winding rotor has been placed under the dial.

Phillips’s Geneva Watch Auction XI is set to take place between June 27 and 28, but those interested in the Track 1 Launch Edition can place an advanced bid now. The chronograph is expected to hammer down for a price between $20,700 and $41,300.