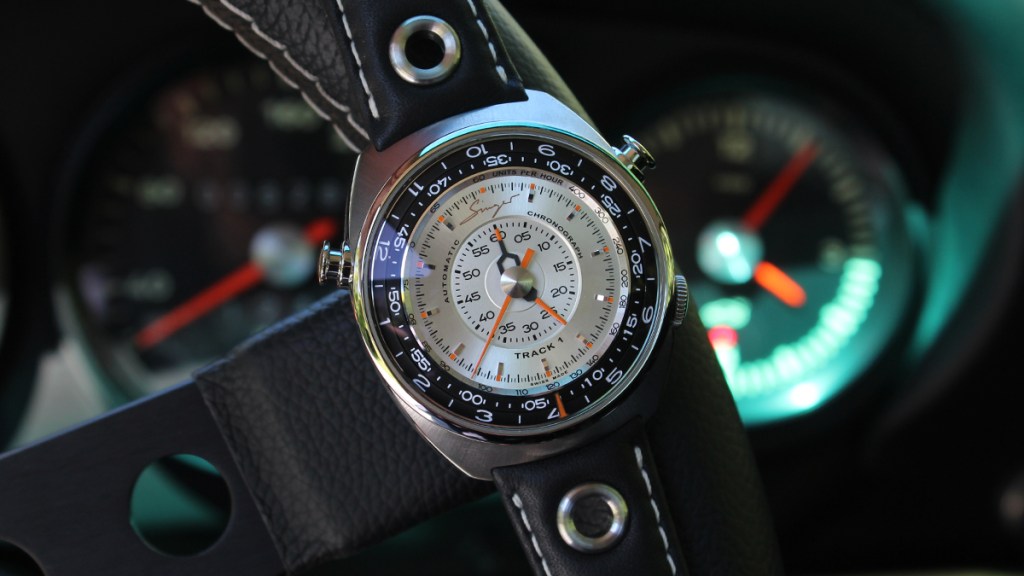 Limited to 50 pieces worldwide and priced at $41,200, the new chronograph is powered by a variation of the self-winding AgenGraphe caliber, the original version of which is fitted in the Fabergé Visionnaire Chronograph we reviewed just weeks ago.

Similar to how Singer strives to distill the essence of the 911, the Track 1’s DNA is rooted in the 1960s and ‘70s “golden era” of chronographs in motorsport. A 43 mm barrel-shaped titanium case with short lugs and bright, contrasting orange hands scream vintage appeal, though this is where the parallels end. The original design was born from a conversation between Singer founder Rob Dickinson and Marco Borraccino, a well-known watch designer whose resume includes a stint as head of design for Panerai and establishing the Chair of Watch Design program at the Geneva School for Art and Design. The duo bonded over a love of the connection of design and engineering, and before long, a plan was in motion.

Functionally, the new chronograph is as straightforward as they come. A massive central subdial (if you can call it that) contains three hands (all of which count to 60) that indicate the seconds, minutes, and hours of the chronograph run time. The 60-hour counter is a bit of a surprise, although the movement is said to have a large enough power reserve (at least 60 hours, according to official specs) to run for the entire duration. It certainly makes sense from an aesthetic standpoint, as only totalizing 12 or 24 hours on the subdial would require additional numerals, which would add clutter to an otherwise well-balanced dial.

The current time on the Track 1 can be read digitally on the pair of rotating discs on the outer perimeter of the dial via a broad orange marker at six o’clock. Thanks to a heavy application of luminescent material, running time will remain legible in low light as well. The Track 1 uses a “bullhead” pusher configuration, with the start and stop pusher at 10 o’clock and reset at 2 o’clock, although unlike traditional versions (such as those released by Omega and Breitling over the years), the Track 1’s crown is partly recessed into the case at 4.

During our visit in Geneva, Rob and Marco stated that the Track 1 is the beginning of something bigger and not simply a one-off exercise. They’ve already been mapping out their next three to four years, and over time we can expect a full line of watches from Singer Reimagined. Given the stellar execution of its first watch, we can’t wait to see what they will reveal next.