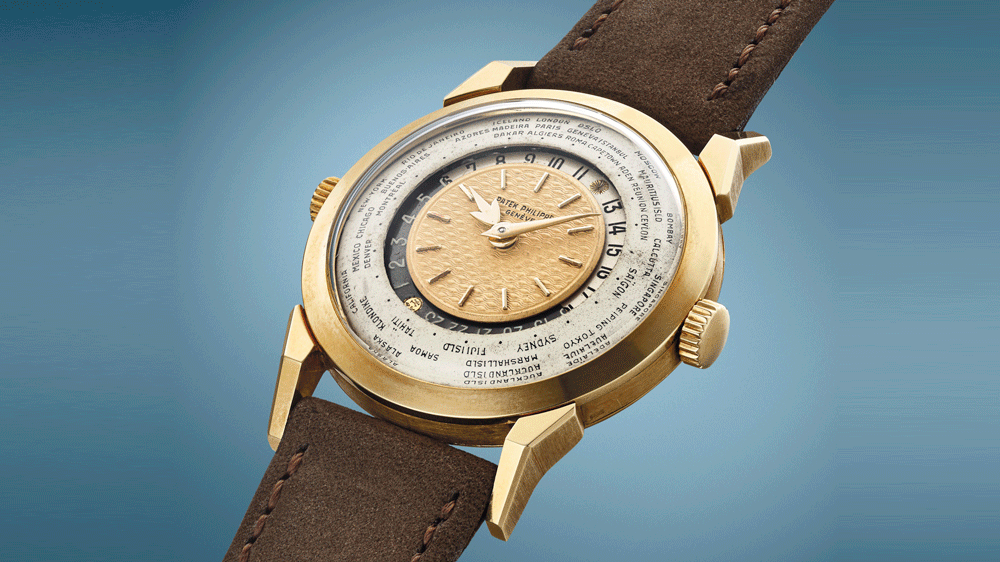 Christie’s white-glove watch sale in Geneva on November 7 totaled $25 million, with 15 percent of the bidders were new to Christie’s. Two days later, Sotheby’s sold $13.8 million worth of watches at its Geneva sale, reporting that 31 percent of its registered bidders were new to Sotheby’s and that 38 percent of all bidders were under the age of 40. This trend is consistent with comments made by Aurel Bacs of Phillips, which shattered auction records a few days earlier at its $74.5 million Geneva Watch Auction XIV. “The [watch collectors] community is growing by the day,” said Bacs. “And it’s young, lively, dynamic people, not elderly gray-haired gentlemen like I saw in the ’90s.”

Along with this younger group of bidders, there have been some noteworthy changes in buying patterns. Although Patek Philippe and Rolex continue to dominate sales and prices, independent makers are starting to see soaring numbers, some of which represent comparatively modern designs that represent a redefinition of Grail watches. The Cartier Crash and certain Omega Speedmaster models have also been hot.

One of the star lots in the Sotheby’s sale, for example, was a Cartier Crash, a rare 18-karat yellow-gold example of the misshapen watch, which smashed its pre-sale estimate (around $330,000) and set a world record for a watch of its kind at $884,972. (The previous record for a Crash was $225,000, before premiums, and was sold by Christie’s last December.) It has steadily climbed in price and popularity over the past few years. “It’s is one of those special watches that everyone has heard of, but we rarely have the privilege of handling,” says Mikael Wallhagen, Sotheby’s European head of watches. Cartier has only produced the model in limited series and special orders, off and on, since its debut in 1967. It is unknown exactly how many first series editions were made—Sotheby’s speculates fewer than a dozen—and this piece, made in 1970, was one of them. Only two from the first series have been offered at auction in the past 25 years. The origins of the model are unclear. It is rumored to have been inspired by a Baignoire model that melted after being engulfed in the flames of a burning car after a crash. Others believe it was Jacques Cartier’s attempt to reproduce the distorted clocks in Salvador Dali’s famed painting “The Persistence of Memory.”

The top lot in the Sotheby’s sale, however, was a Rolex Ref. 6264, a yellow-gold “Paul Newman” Daytona “John Player Special” (as the gold cased models with black dials are called) selling for $977,914. The JPS was produced in very limited numbers between the late 1960s to early 1970s. Only 10 examples in 18-karat yellow gold are known to have been made.

Omega has been making waves at auction and this Speedmaster Ref. 2915-1 Broad Arrow, made in 1957, sold at the Sotheby’s auction for $360,360. Another Ref. 2915-1 made in the same year sold at a Phillips auction a few days previous for a stunning $3,399,633. The differences between the two are minute but can make a world of difference: The bezel of the watch on the Sotheby’s piece had been replaced, and the hands, although original, had been re-lumed. The bezel, case, dial and hands on the Phillips version were all original, and it had a coveted “tropical” dial that had aged and patinated to perfection.

The star Patek Philippe in the Sotheby’s sale—and there always is one—was a 4th series Ref. 2499/100 in 18-karat yellow gold, one of the most coveted vintage perpetual calendar chronographs made by the brand. It sold for $594,330. The model was produced from 1950 to 1985. This one was made in 1982, and was part of the first series to be made with sapphire crystals.

Over at Christie’s the chart-topper was an 18-karat yellow-gold Patek Philippe Ref. 2523 World Time. The piece, made in 1953, is one of the earliest specimens of the two-crown World Times made by Patek. The guilloche center is not known to exist on any other yellow gold reference. Only 26 pieces were made in yellow gold, the same number were made in pink gold and only one white gold reference. It sold for $2,937$,000.

Another headliner at Christie’s was the Rolex Deep Sea Special No. 1, thought to have been attached to the hull of Auguste Piccard’s bathyscaphe Trieste in 1953 as it plunged 3,700 meters into the ocean. Made in 1953, it was number 1 of seven experimental pieces made. It sold for $2,079,000.

But don’t sleep on Breguet—a pair of pocket watches from the maker surpassed the million-dollar mark in the Christie’s sale. A 1977 Breguet No. 3832 hunter double case pocket watch with a half-quarter repeating lever à tact, equation of time, day, date week and month sold for $1,326,600. Another Breguet pocket watch, this one more vintage, sold for $1,353,000. The two-color 18-karat gold piece is a four-minute tourbillon – one of only seven known four-minute tourbillons made by the master – with double sub-seconds, power reserve, stop-seconds and a regulator dial. According to the catalog essay, the watch was sold in 1822 to Monsieur Le Comte D’Archinto for the sum of 4,640 Francs, proving once again that good watches, if you can keep them long enough (or pass them down through the generations), are a great investment.