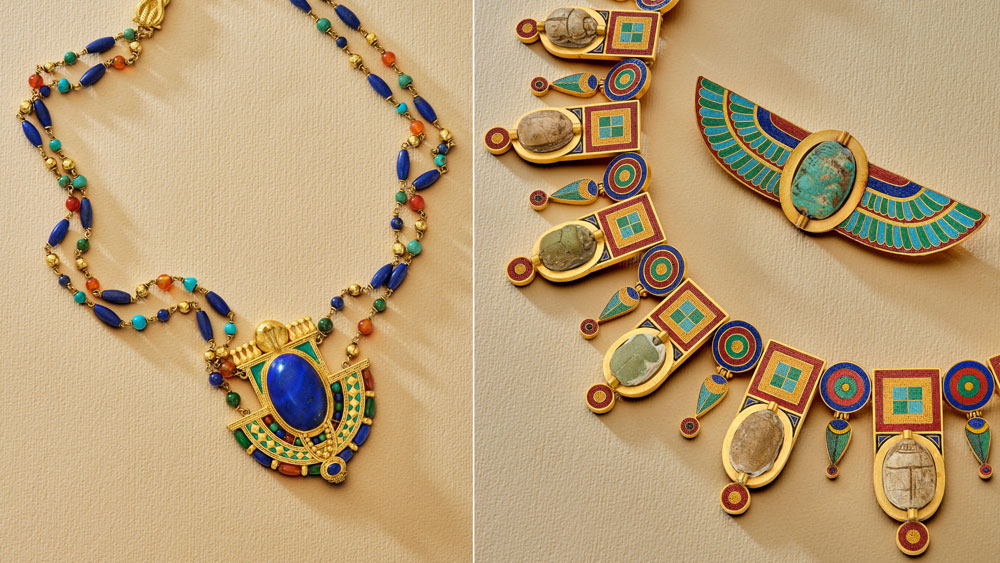 Egyptian-revival jewelry is about to make another much-anticipated comeback. Sotheby’s is hosting a sale dubbed “Egyptomania,” which will put a slew of jewelry inspired by the ancient Egyptian world up for grabs. The pieces will be put on the block at Sotheby’s Magnificent Jewels sale on December 7th. But for those that just want to dream a little, they will be placed on display for the public, first in Dubai from September 26th through the 28th and then at Sotheby’s New York galleries from November 30th through December 6th.

The Egyptian-focused events coincide with the 100th anniversary of the discovery of King Tutankhamen’s tomb, which sparked a global interest in the ancient culture that spawned designs in jewelry—as well as architecture, sculpture and even set designs—mimicking the shapes, colors and motifs of Egypt’s great empire. But the sale also covers the fervor for ancient Egyptian culture pre-dating the roaring ’20s, when Tut’s tomb was unearthed in 1922. Pieces dating back to the 19th century, such as the showstopping micromosaic necklace accented in carved scarabs by Castellani dating back to the 1860s (estimated at $450,000-$650,000), reveal the obsession was alive and well before the king rose from the dead. And take, for instance, Louis Comfort Tiffany’s stone beaded necklace set in 18-karat gold that mimics a menat, an ancient Egyptian design attached with an amulet meant to ward off evil spirits. The Tiffany & Co. necklace, designed in 1913 after Tiffany’s trip to Egypt’s Valley of the Kings, came accented with a giant lapis lazuli stone amulet for extra glamorous armor.

Thanks to historic events like Napoleon’s campaigns in Egypt, Thomas Young’s study of the Rosetta Stone, and Jean-François Champollion’s deciphering of hieroglyphics in the 19th century, “Egyptomania” was alive and well before King Tut ignited the imagination of artists during the free-wheeling ’20s.

The sale, however, will also cover the enduring fascination with Egypt well into present-day pieces and will be a must-see for anyone that appreciates the decorative arts born out of one of ancient civilization’s greatest cultures.