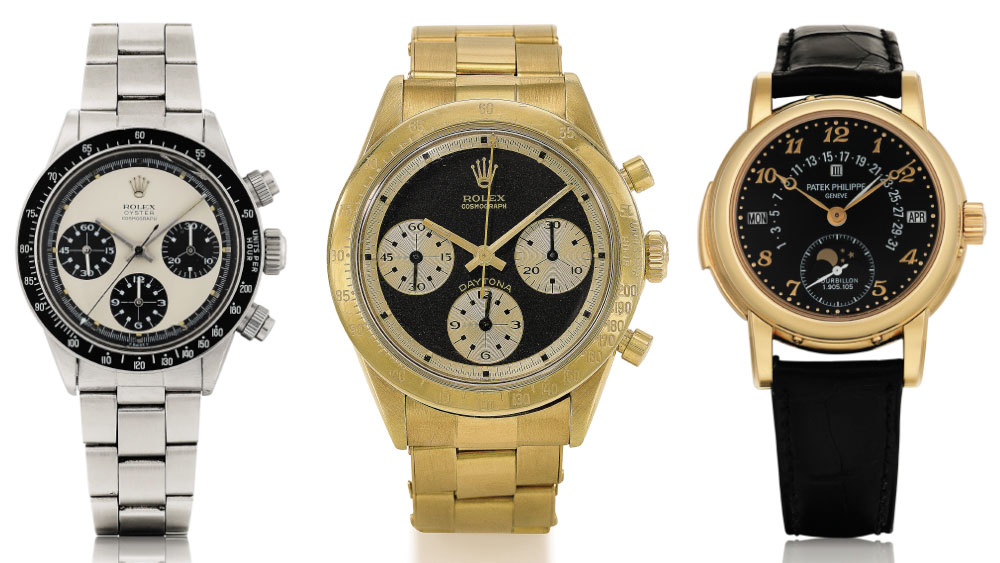 Sotheby’s sold $13,093,186 worth of watches at its November 11 and 12 sales in Geneva. The November 11 sale was Masterworks of Time—a regular-themed sale dedicated to a specific area of watchmaking—in this case, the prowess of German watchmakers led by a large group of A. Lange & Söhne pieces. That sale totaled $4,622,558.

The November 12 sale of Important Watches totaled $8,470,628, with the highest prices split between Patek Philippe and Rolex, particularly Daytona and Nautilus models. The top lot was a gold Rolex Paul Newman Daytona Ref. 6239, selling for $515,492. The second highest lot was a gold Patek Philippe minute repeater/perpetual calendar/tourbillon with retrograde date, moon phase and leap year—a fairly modern watch made in 2005 that sold for $503,410. This was followed by another Paul Newman Daytona, a steel Ref. 6263 with a panda style dial, which sold for $415,313.

Next on the list of top lots was a limited-edition, 175th-anniversary platinum Patek Philippe hour-striking watch with jumping hour and minutes, selling for $352,387. And then came two Patek Philippe Nautilus pieces, including a limited-edition Ref. 5711P with baguette diamond markers, selling for $289,461, and a fully diamond-set Ref. 5719/1G-001, which sold for $239,120. Finally, a rare Rolex Daytona Rainbow, set with multi-colored sapphires on the bezel, sold for $207,657.

The top lot in the Masterworks of Time sale was a Freres Rochat bird cage automaton clock that sold for $1,010,000. The second highest price paid was $439,180 for a Lange pink gold pocketwatch with a perpetual calendar, grande and petite sonnerie and split seconds chronograph. Made in 1901, this watch was the first and most complicated of just nine watches Lange produced between 1901 and 1928. Another A. Lange & Söhne piece, a silver one-minute tourbillon with spring detent escapement and up-down indication made in 1924, sold for $106,658.

The next Masterworks of Time sale, entitled “Abraham Louis Breguet: Horologist Extraordinaire,” will take place in New York in June 2020. Today, Sotheby’s has sold $106.7 million worth of watches in 2019, representing a 36% increase over last year.