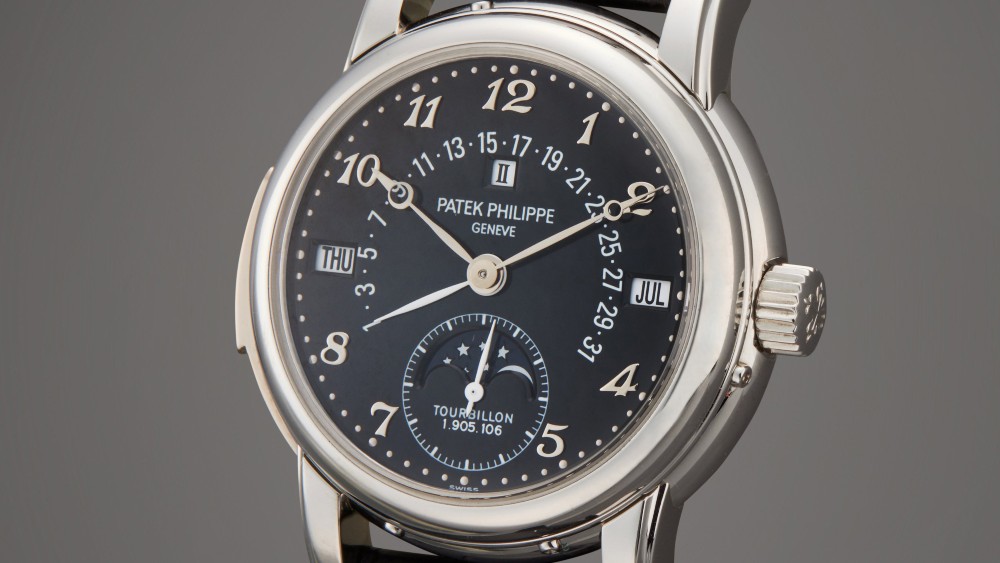 Mark your calendars for December 9, collectors.

Sotheby’s is holding its Important Watches auction in New York City, and two highly coveted timepieces from Patek Philippe will be going under the gavel. The first is a yellow-gold world timer from 1948 that features a cloisonné enamel dial depicting a map of North America (estimate: $500,000 to $1 million). The second is a platinum perpetual calendar minute repeater tourbillon from 2005 that is characterized by a retrograde date display, moon phases and a leap year indicator (estimate: $500,000 to $1 million).

The Ref. 605 world timer, aka “Heures Universelles,” is one of the most sought-after vintage pieces by Patek. It was one of the watchmaker’s earliest models to incorporate the word time mechanism. In a production run of only about 30 years, less than 100 examples were produced. This particular example is especially rare as it has a hand-painted cloisonné enamel dial that is entirely unique. It comes to market from the family of the original owner, a Dartmouth graduate who served in both World War I and II as a distinguished lieutenant commander in the US Navy. As a result, it has been perfectly preserved for nearly 75 years.

The more modern yet equally special Ref. 5016P was produced by Patek for 16 years between 1994 and 2010. It combines three of the most impressive complications in watchmaking: the minute repeater, the perpetual calendar and the tourbillon. However, this example is even more exceptional as it also sports a moon phase and a retrograde date display. Prior to 2001, this was the most complicated watch produced by Patek. It was eventually surpassed by the Skymoon Tourbillon. The wrist candy comes with all its original accessories and is reportedly in top condition.

Of course, there is much to be celebrated among the other 126 lots, including a Tiffany-signed Patek Ref. 5970 and a limited-edition yellow-gold Cartier Crash. In addition, there are three iconic vintage Rolex watches from the collection of famed Hollywood stuntman and racecar driver Stan Barrett. Of the trio, two were gifted to him by his close friend Paul Newman and worn during his quest to break the land speed record in 1979.

The Important Watches auction will begin on December 9 at 10.15 am EST. You can preview the lots online by visiting Sotheby’s website, or, if you’re in New York City, you can view them on display at the auction house from December 8.