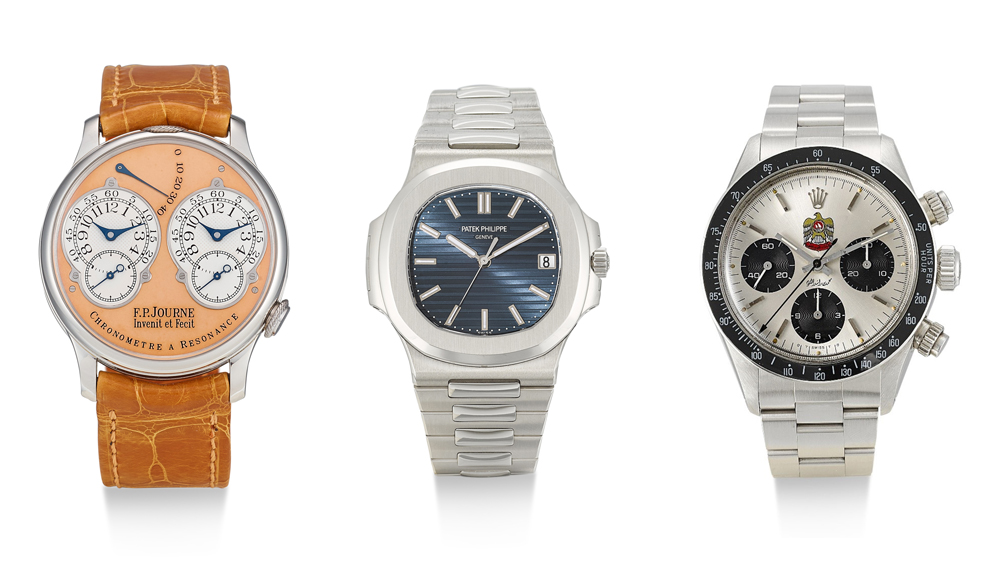 Auction houses are seeing online sales skyrocket during the pandemic. Christie’s is doubling down on its jewelry sales, offering increasingly high-value lots online, including a rare 28.86-carat diamond with a top estimate of $2 million in an upcoming June sale, and now Sotheby’s is upping the number of its online watch auctions to three per week, starting this month.

In April, Sotheby’s says it raked in $4.6 million in online watch sales setting a new record for the house—54 percent of buyers had never purchased a timepiece at Sotheby’s before and 40 percent were under 40 years old. That same month also set a record for the highest price ever paid for a watch online when a 2014 Patek Philippe Nautilus Ref. 5711 in platinum sold for $484,000. Thirst for the Gerald Genta-designed model shows no signs of being quenched anytime soon.

In the more niche collecting realm, F.P. Journe continues to rise. The watchmaker set two new records last month at Sotheby’s with a third series Tourbillon Souverain d’Égalité with a brass movement fetching $272,400 and a platinum Chronomètre à Résonance with a pink dial hammering in at $208,000. The independent brand, which makes just 1,000 watches per year, continues to gain speed in the secondary market with many Patek Philippe collectors now clamoring to get their hands on its models (pre-owned e-tailer, Watchbox, has also been stocking up on F.P. Journe, betting on its increasing value).

If you’re looking to get your hands on an F.P. Journe Resonance, Rolex Daytona or Patek Philippe Nautilus, you will have your chance in May’s upcoming sales with New York on Tuesdays (starting May 19-26), Hong Kong on Wednesdays (now through May 20) and Geneva on Thursdays (starting May 21-28). Sotheby’s says it will curate around 15 watches and clocks every week on its new Watches Weekly platform.