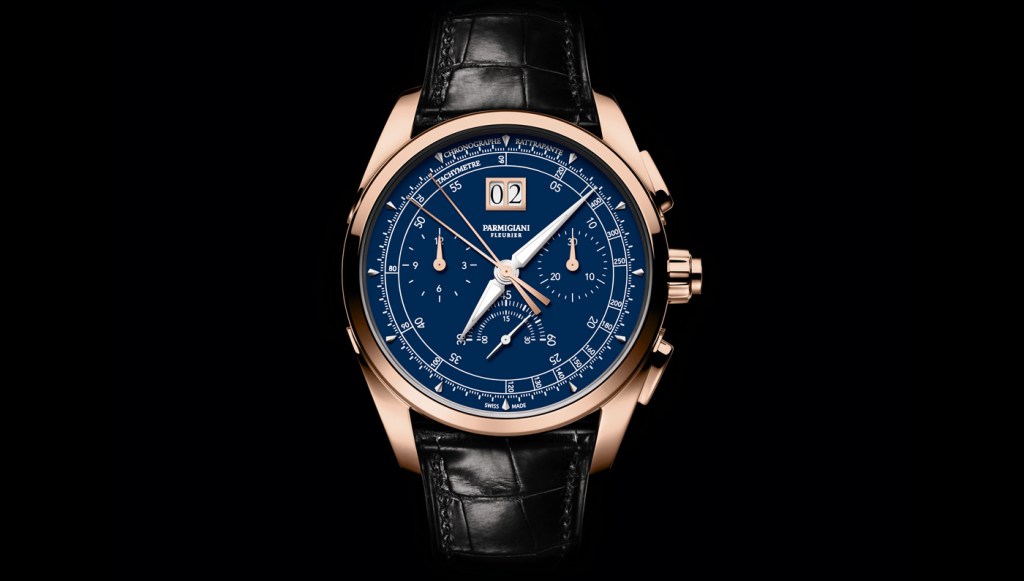 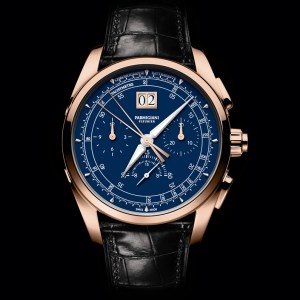 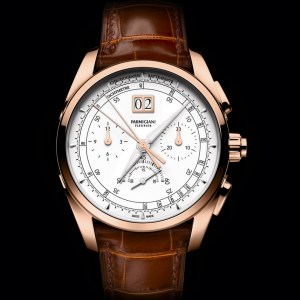 It’s not just another chronograph,” asserts Florin Niculescu, vice president of product development at Parmigiani Fleurier. “It’s our chronograph that we did from the beginning. It’s really our signature.” Parmigiani Fleurier may possess more competencies than almost any other manufacturer in Switzerland, yet the pride in the debut of its Tonda Chronor Anniversaire is palpable in executives like Niculescu. He and his team have succeeded in creating not just a workhorse integrated chronograph movement for the

brand, but one that seems to walk an independent line between ultramodern but sterile chronograph calibers and latter-day traditional constructions that mimic the famous movements of the mid-20th century. Chronor—so named because both case and movement are executed in gold—is limited to just 50 pieces for Parmigiani’s 20th-anniversary year. The low production numbers belie the effort involved in the six-year development of the movement. The chronograph, one of the most difficult movements to execute properly, is widely regarded as a milestone in the capabilities of any watch company. Although Parmigiani has featured its Kalpagraph chronograph in its collection since 2007, it was based on a modular construction, with a separate chronograph mechanism sitting on top of one of the company’s automatic base movements. The integrated movement design of Chronor is a much higher order of difficulty.

As released, Chronor is a manual winding split-seconds chronograph with two separate column wheels. The movement, however, was clearly designed with adaptability and larger production numbers in mind. The split-seconds mechanism sits on top of the movement, underneath an elaborately finished upper bridge. Both are removable, perhaps to be replaced by other constructions, such as an automatic winding system, in future versions. The movement also features high torque, suggesting the possibility of additional complications in the future as well.

The heart of the chronograph has been designed for modern performance and industrial efficiencies. The movement beats at 5 hertz for accuracy, and the chronograph is driven by a vertical clutch and hammer arrangement that provides precise engagement and chronograph hand movement along with additional benefits.

“We picked the vertical clutch because it’s modern and for us, it guarantees a more accurate industrial process,” says Niculescu, who differentiates the movement from other artisanally made calibers that require a great deal of hand-adjustment. “We wanted to properly industrialize this chronograph. Once you’ve done that, you’ve prepared your chronograph to be adaptable to create a family of products.”

The company’s famously idiosyncratic design style is not only evident in the case with its distinctive lugs but also in the form and function of the movement.

“It was my idea to have a supplementary complication like the big date, which has extra visibility but is not traditional,” explains company founder Michel Parmigiani. “And the movement is particularly my signature because of the traditional, classic decoration including many interior angles on the bridge in solid gold. It also provides volume, which you don’t get with a vertical clutch design.”

Features such as the interior angles, which flaunt the brand’s by-hand decoration methods, and the enamel dial, are a nod to watchmaking tradition that softens the watch’s many modern attributes. This stylistic combination, along with the technical difficulties, makes the creation of this chronograph a more important achievement than many more vaunted complications, a fact of which Parmigiani and his team are keenly aware. “Tourbillons are fine and delicate things, but the chronograph has so many parameters,” says Parmigiani. “When you have successfully made a chronograph, you have accomplished the task of being a true watch manufacture.” Parmigiani Fleurier, 949.489.2885, (parmigiani.ch)