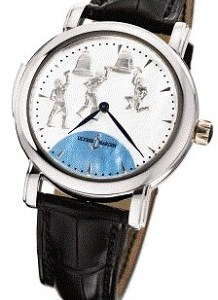 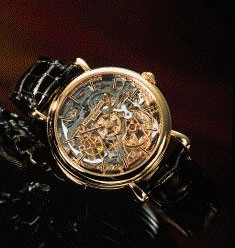 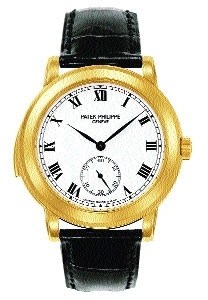 A complicated watch movement—its intricate mechanisms engaged in the rhythmic tracking of time—is beautiful to behold. But to truly appreciate one of the highest complications in watchmaking, you must close your eyes. Hearing the delicate chimes of a minute repeater is a uniquely gratifying experience, far beyond simply peering at gears and wheels through a dial aperture or transparent case back. Unlike everything else that is measured, regulated, and quantified in horological circles, the song of a minute repeater has its own individual character.

Activate the mechanism, usually by pushing a small slide on the side of the case, and you will hear the distinctive voice of the minute repeater’s two gongs—a lower tone for each hour, lower and higher tones for each quarter, and then the higher tone alone for the minutes. The pleasant sound obscures the real purpose of the audible mechanism: solving the vexing problem of reading the time in the dark. The minute repeater, which dates back to the late 17th century, is one of the oldest of the currently manufactured complications.

It is not difficult to imagine the prestige of owning such an elaborately useful timepiece in the days before the dawn of electricity. Yet today, even more prestige is associated with repeaters, but for a different reason. These watches are, above all, rare. Each year, Swiss workshops produce far more perpetual calendars and even tourbillons than repeaters. Only a select few brands attempt the complication, which is often relegated to top-tier grand complication models. A few of the specialists produce watches with only a minute repeater complication, but even these require so much time and attention that production remains astonishingly low.

“Minute repeaters are completely hand finished,” explains Rudolf Bull, a technical specialist at Vacheron Constantin, one of the most reputable makers of the complication. “It is the high quality of this finish that makes a watch like this so exceptional. The gongs must be made in a special way and fitted in a special way. It’s a question of patience: Repeat and repeat and repeat until you have the result that you need.”

While any watchmaker with enough ambition and skill can attempt a repeater, serious collectors usually prefer the old-guard brands for the quality of their sound. “Vacheron Constantin repeaters have a sound that’s deep and quite long-lasting,” explains Philip Poniz, a director at Antiquorum, whose extensive auction experience has allowed him to hear a multitude of minute repeaters. “Patek Philippe has more of a supple tone, and for their size, Audemars Piguet’s gongs have an amazing sound. Personally, I like the sound of Vacheron Constantin, but of course it’s just a matter of taste.”

Such preferences are likely due to the long-standing expertise required to produce the gongs that are the heart of any repeater. Given that fine gongs are the product of many years of pains-taking development, it is no surprise that the established prestige houses dominate the field. The metallurgical formulas for gongs of exceptional resonance and clarity are among the most closely guarded industrial secrets in Switzerland. Many manufacturers flatly refuse to discuss the making of gongs, much less hint at the relative complexity of the alloy.

In addition to the quality of the gong, almost every aspect of the watch’s construction has an effect on its resonance. The gong itself is a small metal block with a long, protruding coil that wraps around between the edge of the movement and the inside of the watch case. When a small metal hammer strikes the block, the vibrations resonate along the coil, producing a clear, beautiful tone.

A host of other factors, such as the way the movement sits within the case, can have a dampening effect and must be exhaustively adjusted before the watch is ready to leave the workshop.

Another important issue is case size, which may explain why the complication flourished in the pocket watches of the 19th century. Repeating wristwatches, including the ones manufactured today, constantly balance their acoustic qualities against the constraints of size. Patek Philippe, for instance, produces one model (Reference 5079) whose sole com-plication is a minute repeater. The 42-millimeter case goes far beyond the company’s traditional wristwatch proportions and has clearly been designed to deliver the highest acoustic quality.

Audemars Piguet has moved in the other direction, earning a reputation for its ability to produce some of the world’s smallest minute repeating wristwatches. The intriguing Edward Piguet chiming minute repeater is a rectangular watch containing a movement that is round, like all minute repeaters. The movement itself, including the three gongs needed for its signature chime, measures just over 22 millimeters.

“We forge the gongs out of one piece of steel,” points out Martin Wehrli, a specialist for Audemars Piguet. “Nothing is soldered. We also have a special piece that connects the gongs directly to the case so the transmission of the vibrations is more efficient. All this contributes to the sound.”

While technical precision is required to produce sound, the true quality of a minute repeater’s tone ultimately relies on a more subjective instrument: the human ear. “This is one of the artistic aspects of watchmaking,” explains Robert Harrap, a watchmaker with Renaud and Papi, a specialty workshop in the Swiss town of Le Locle that assembles minute repeaters and grandes sonneries for Audemars Piguet and other top brands. “It’s like being a musician. You cannot describe exactly what goes into the work. It’s a feeling.”

Like purchasing a work of art, obtaining a desired minute repeater requires a special combination of patience and resourcefulness. The best approach may be to set aside strict brand loyalty and consider a variety of makes, as several manufacturers use the expertise of established specialty workshops and put their own twists on the chiming watch. Ulysse Nardin, for example, incorporates whimsical automatons, while others such as F.P. Journe might display the mechanism through an aperture on the dial.

Auctions are another avenue where you can discover older pieces. Minute repeaters from the 19th century, in particular, can possess outstanding acoustic qualities. Even experts cannot agree about whether the source of the difference is the construction, materials, or simply age itself.

Whether you prefer a fine vintage model or the latest in minute repeater technology, finding a watch that speaks to your soul is more a matter of listening than looking.

Minute repeaters are just one variety of watches that can chime the time. Other types of repeaters, such as the quarter repeater, sound different divisions of time, usually with one or two gongs. Yet another rare breed—the grandes sonneries—can be set to chime the hours and quarters automatically rather than on command. Grandes sonneries can contain three or more gongs to achieve an ascending-descending scale akin to the bells of a village church. Many of these models offer a slightly less obtrusive setting called a petite sonnerie that chimes only the hours when the full strike is not desired. Patek Philippe’s ultracomplicated Star Caliber pocket watch wins the superlative award in the category with five gongs that sound a full “Westminster chime” à la Big Ben on demand like a minute repeater, or on the hour like a grande sonnerie.

All of these related watches share a striking mechanism that registers the time and drives a small metal hammer against the gong. But before the system was perfected in the early 19th century, repeaters were prone to errors and could sometimes fail to strike entirely.

Today most companies use very similar striking mechanisms that are relatively simple and reliable. In fact, most of the mechanisms are produced by small independent workshops that do contract work even for many of the elite names in the Swiss watch industry. The similarities end there, however, because the all-important sound of the repeater can vary widely from company to company and even from watch to watch.