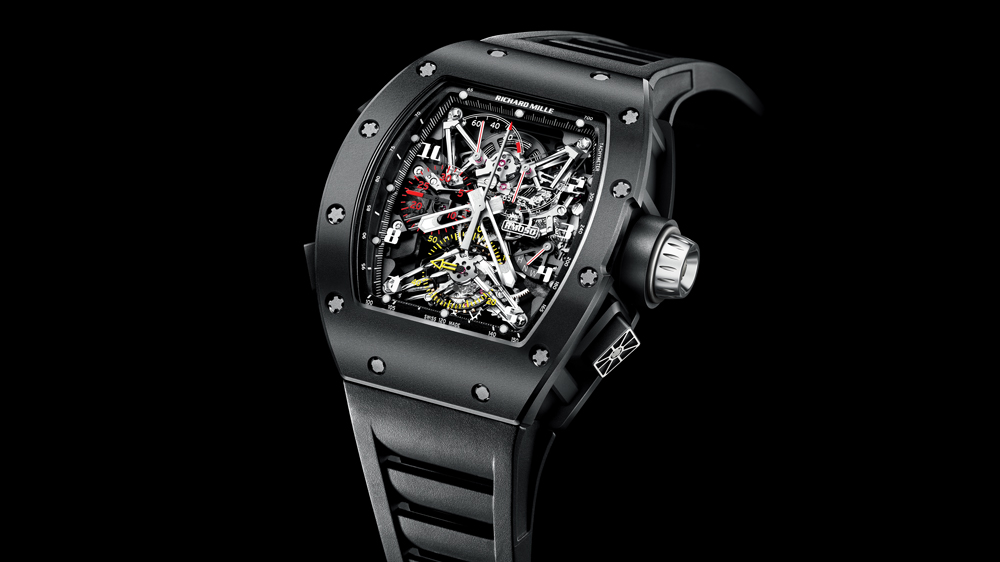 “In F/1 design, parts of the car must be totally rigid, other parts strong yet very exible—otherwise
they would break,” says Richard Mille, whose watch company has famously adopted the design codes of Formula 1 racecars. Less well understood by the public, however, is the degree to which Mille has incorporated racing-oriented constructions into the actual timekeeping performance of his watches. “I have used this approach in a number of our tourbillons,” he continues. “The bridges are light, crafted of titanium with cutouts in order to be very exible, while the baseplate is extremely rigid to protect the movement’s stability.”

Mille’s watches are also known for emulating a number of edgy automotive constructions like the tubular chassis of 1960s Formula 1 cars, which translated into a tubular baseplate on the original RM 012 from 2006, with related components in some of the more recent RM 50 iterations. The company had to design and then assemble the struts so that the working pinions were positioned within microns in a three-dimensional space and were able to withstand shocks.

Other, less visible connections have materialized through Mille’s search for improved functionality. “The going train of a watch, analogous to the racing car’s power train, must transfer energy to the escapement in an optimal, unwavering, and efficient manner,” he says. “This is why I use an automotive gear profile in parts of the going train, directly taken from engine design. It transfers energy more efficiently than a classic watchmaking gear-tooth profile can.”

Thanks to its decade and a half of building unconventional, sometimes groundbreaking Bugatti watches, it’s easy to associate Parmigiani Fleurier with the transverse, driver’s-style design. But each of the three major models the brand has created, including the most recent Type 390, has a multitude of small mechanical connections to automotive design that sometimes go unnoticed even by the owner. In the case of the Type 390, the gearing may be the brand’s most direct nod to the auto industry to date.

One of two major gear constructions, the power-reserve indicator is actuated by a relatively
complex conical gear differential. “This is based on the same principle as the differential in an engine,” explains Gustavo Calzadilla, Parmigiani Fleurier’s U.S. brand manager, “which distributes the energy evenly between the car’s two front wheels.” Located on one end of a cylinder that houses the watch’s power train, the differential translates the movement of the two serial mainspring barrels into the precise motion of the indicator arrow.

Perhaps even more unique from a horological perspective is the use of planetary gears—akin to
those in an automotive transmission—for the going train of the timepiece. Like all such constructions, the gears adjust the turning rate of the barrels to what is required for the flying-tourbillon escapement, but the planetary gears are uniquely adapted for the confined cylinder housing. According to Florin Nicolescu, Parmigiani Fleurier’s vice president of product development, the arrangement provides additional benefits. “In the future we can
adapt this to any kind of time display,” he says. “We can take energy from different parts of the gears, either for more torque or more speed.”