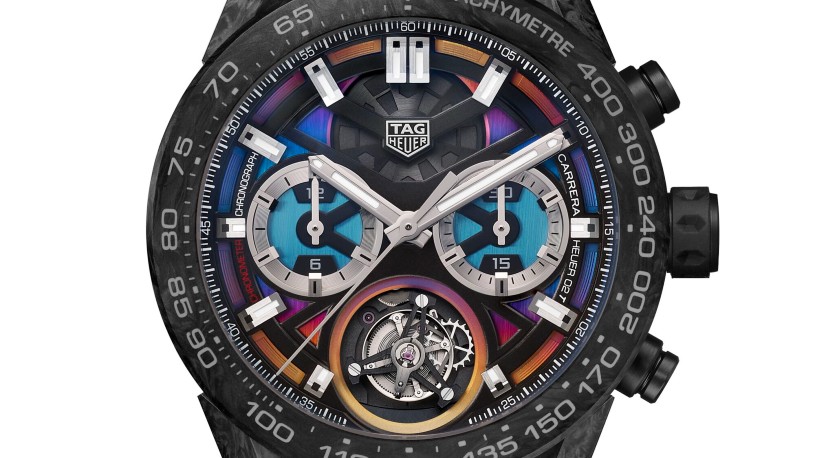 When TAG Heuer introduced its Carrera Chronograph Tourbillon Nanograph in 2019, it was the first time a carbon-composite hairspring had been used in watchmaking. That model went on to receive a nomination at that year’s Grand Prix d’Horlogerie de Genève in the Chronograph category, later being beat out by Bulgari’s Octo Finissimo Chronograph GMT Automatic. Still, the watch marked continued evolution for TAG, who had been laying the groundwork for its expansion into more complicated timepieces since 2016, with the release of the Carrera Heuer 02T, a wildly affordable tourbillon chronograph. The Swiss watchmaker continues to build on this lineage with the debut of the limited-edition TAG Heuer Carrera Chronograph Tourbillon Polychrome.

The all-new watch retains the signature case, bezel and strap design of the original Carrera Chronograph Tourbillon Nanograph—but also reveals a stunning new multicolored dial that serves as a subtle nod to the rainbow trend. The timepiece features an all-black 45 mm case made of lightweight, fine-brushed black PVD grade 5 titanium. The black monochromatic base creates the perfect backdrop for the skeletonized rainbow dial, framed by a fixed carbon tachymeter bezel. Here, you have rhodium-plated blue chronograph sub-counters at three and nine o’clock and a multi-hued tourbillon at six o’clock. The rainbow treatment continues throughout the open-worked dial as well as the skeletonized central rotor, visible through the exhibition caseback on the back of the watch.

To achieve the brightly colored iridescent effect, TAG Heuer worked closely with a company who specializes in vacuum deposition PVD treatments. While typical PVD treatments result in a solid color, this technique deposits metallic oxides in layers of ever so slightly varying thickness (we’re talking nanometers). The result is the bold and eye-catching gradual color spectrum seen throughout the Carrera Chronograph Tourbillon Polychrome. Powering this one-of-a-kind timepiece is, of course, the watchmaker’s caliber Heuer 02T COSC chronograph tourbillon movement.