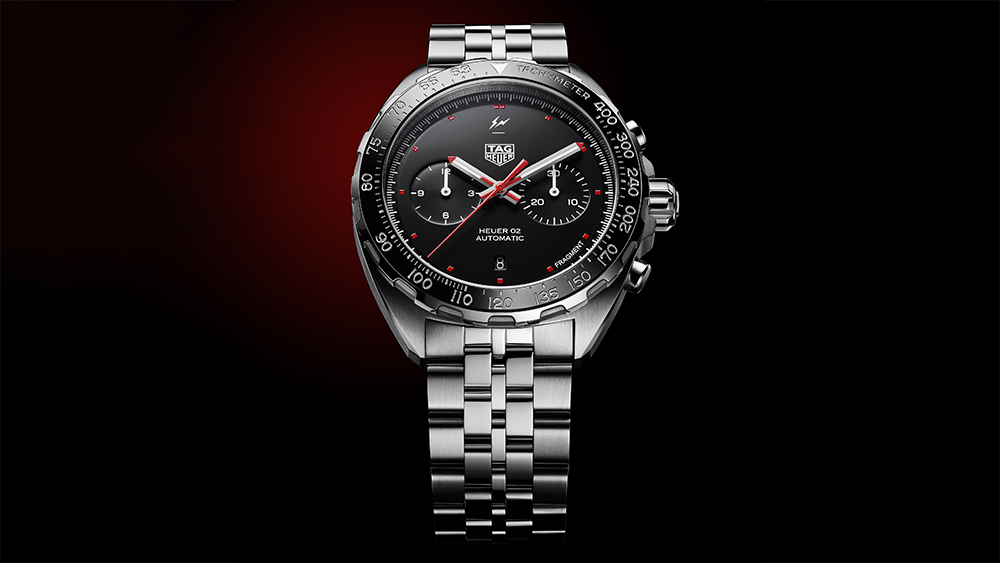 TAG Heuer has kept pace with the evolution of style since 1860, producing avant-garde timepieces that are firmly rooted in the here and now. So, it’s no surprise the disruptor’s latest design takes its cues from streetwear.

The one-of-a-kind chronograph was penned in partnership with the founding father of Japanese streetwear Hiroshi Fujiwara of Fragment fame. The pair previously launched a vintage-inspired design back in 2018 and all 500 models were snapped up quickly by horological hypebeasts. This time ‘round, the duo has created a decidedly modern reinterpretation of the classic racing-inspired C-case driver’s watch from the ‘60s and ‘70s that is at once bold and minimalistic.

Again limited to 500 pieces, the Fragment Design Heuer 02 retains some heritage features—the tachymeter scale, cushion-shaped 44mm case and chronograph function, for instance—but incorporates a jet-black opaline dial and red accents to give it a contemporary edge. The hour markers and hands are colored in high-contrast white, as are the two logos which sit at the center of the dial.

Arguably one of the coolest additions is the red sapphire crystal caseback. Through this rose-tinted window, you get a clear view of the in-house Heuer 02 automatic column-wheel chronograph movement, which is not only a striking design feature but also gives the watch an impressive 80-hour power reserve.

“Redesigning this TAG Heuer chronograph timepiece gave me the opportunity to use an existing legacy to create a new one,” Fujiwara said in a press release. “I gave the design a modern and exceptional flair with the red case back, which reflects one of the brand’s logo colors and also gives it a completely new and evolved character.”

Another standout addition is the new five-row steel bracelet, which is fitted with a butterfly folding clasp. This bit of bling has been brushed and finely polished so it catches the light with every flick of the wrist. Of course, each piece is also engraved with a unique limited-edition number from 1 to 500.

The Fujiwara design will drop July 27 and set you back $6,150. As with most sought-after streetwear pieces, be prepared to (virtually) elbow fellow shoppers out of the way to get the on-fleek watch.