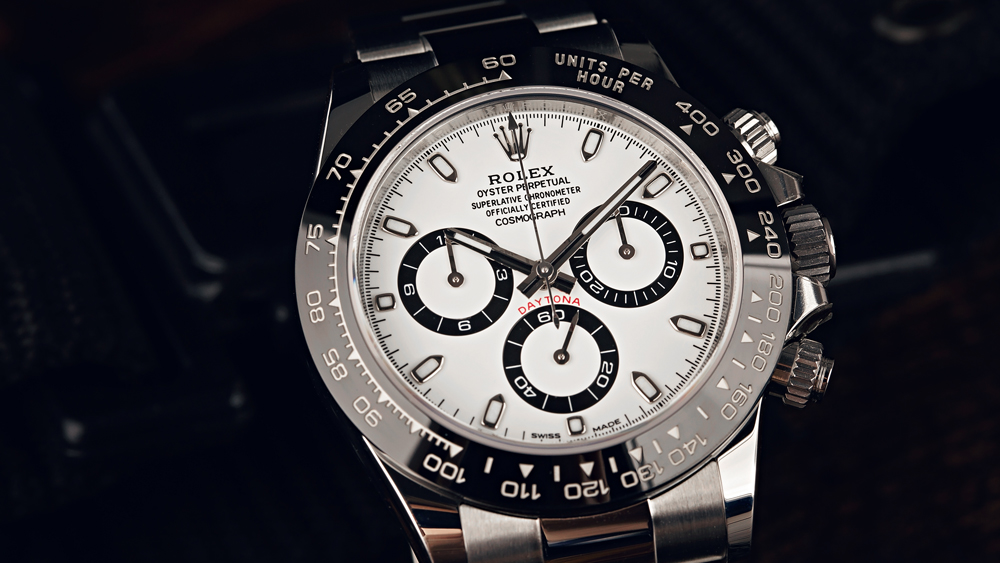 It’s no secret that Rollie’s have a real ROI, but getting your hands on the right crown can be like capturing the Iron Throne. Unless you’re one of Rolex’s most loyal customers—that means buying multiple pieces a year, and not entry-level DateJusts—you will probably have to pick yours up on the secondary market. Enter Paul Altieri, founder of the new and pre-owned timepiece e-tail portal Bob’s Watches, who is known for being a trusted Rolex dealer as well as a collector in his own right.

We asked Altieri for his recommendations on the best Rolex models to collect, from a beginner’s piece to the reference that will affirm your status as a collecting king. You can find at least one of each at Bob’s Watches—except, of course, the one that belongs in Altieri’s own vault.

If you’re just dipping your toes into Rolex collecting, you may want to dive into your horological journey in a more attainable realm. Here we have a Submariner Ref. 116610—a classic in the Rolex roster and one that has been gaining in popularity even in the midst of Daytona mania.

“It’s the iconic model, it’s still what Rolex is known for, even with the Daytona, the GMT and all the other models they’ve got, the Submariner is still the quintessential Rolex,” says Altieri. “Several months ago you couldn’t even buy one—the local dealers were completely sold out of them. Even in the secondary market, they were selling for over retail.”

The Ref. 116610 retails for a relatively reasonable $8,550, but like all covetable Rolex models you likely can’t walk into your local retailer and buy one. The good new is you can still buy one under $10,000—for now.

For hardcore watch enthusiasts, the very mention of the Pepsi GMT-Master II Ref. 126710 might elicit a long yawn. Thanks to Instagram, this was easily the hottest watch of 2018. But for those of you just dialing in, it’s still on fire—the watch currently sells in secondary markets for double its original $9,250 retail price. The Pepsi earned its nickname for its blue and red bezel. Developed in 1955 to help Pan Am pilots keep track of time during transatlantic flights, the fourth hand can be set with the 24-hour bezel to set the second time zone. Prior to 2018, the latest Pepsi was released in white gold on an Oyster bracelet, but when the new steel version with the Jubilee bracelet came out at a more affordable price, they sold so fast they had an instant and significant return on investment.

“It’s been completely oversold now in all the local Rolex stores,” says Altieri. “There’s long waiting lists and it’s still selling for a significant premium over retail.” So how can you get your hands on one? You probably can’t—unless you’re willing to pay top dollar. “Here’s the thing: If you’re a loyal customer and you’ve bought a bunch of watches from a Rolex store and you have a good relationship with your local AD (authorized dealer) and you want to put your name in and you’re willing to wait for a long time, then yes, you can get one,” says Altieri. One of Altieri’s clients from the Midwest was able to purchase both the Pepsi and the new Daytona Ref. 116500 but…he had a 20-year-long relationship with his AD and has probably bought more than 50 Rolex watches over the course of those two decades.

Rolex Pepsi models, no matter the decade of production, go for well beyond their original retail price, so even if you can’t get a new one, a vintage model is still a great investment. This 1990 Pepsi Rolex GMT-Master Ref. 16700 is only slightly more than the retail price of the brand new, but unattainable Pepsi. But if you have some extra cash to throw down (and you don’t mind that the case has been recently polished), then we recommend buying one from the Pepsi’s prime era—when it was a useful tool watch during the dawn of public aviation. This 1968 ref. steel Pepsi on a jubilee bracelet with a Mk 1 tritium dial and creamy markers and hands, for instance, still comes in less than the current model on the secondary market.

The Rolex Daytona Ref. 116500, introduced in 2016, was the first Daytona to feature a Cerachrom bezel—a patented Rolex ceramic material that is resistant to both scratches and ultraviolet rays. Prior to this Daytona release, the model had not received a major update since 2000, when Rolex began equipping it with its first in-house movement, the caliber 4130. It had previously come with a Zenith-made El Primero movement, which the watchmaker had used since 1988.

“I think they nailed it in terms of sizing, the dial, and the Cerachrom bezel,” says Altieri. “I think white is still a little bit more preferred over black currently, but that could change. It’s at an affordable price and it’s kind of a flashback to the 6263 model that they were making in the late ’60s and ’70s and that model has done well. So, it’s a great watch and it’s still selling for a significant premium.”

“When it first came out, I had customers say, ‘I’ll wait six months or a year when the prices come down,’ says Altieri. “Well, it’s been three and a half years, and prices aren’t coming down at all—they haven’t even budged.”

“This is a fantastic watch—a lot of the real horological watch people out there were excited to see something come out from Rolex that had a complicated movement with a calendar,” says Altieri. “They made it with a blue dial and a black dial, but the blue dial is more desirable. It’s a bit more difficult to get.”

The Skydweller Ref. 326934 is a watch that has picked up in demand over time and believe it or not, Altieri says it’s harder to get than the Pepsi GMT-Master II. It’s also selling for double its original $14,000 retail price, and there’s fewer of them popping up in the secondary market because clients are holding onto them.

In certain circles, this Rolex is considered a grail watch. And let’s be frank, if you’re just beginning to collect you’re likely not going to start with this million dollar baby. If you’re already looking ahead to the future however, this could be one of your end-goals in Rolex collecting.

The Ref. 6241 Daytona is known as the John Player Special because of its black-and-gold coloring that looks like the livery of a 1972 Formula One car sponsored by cigarette maker John Player & Sons. The 6241 was manufactured prior to the ’70s between 1966 and 1969 and less than 300 examples of the model in 18-karat yellow gold were ever produced.

“I bought this watch two years ago and was really happy to add it to my collection,” says Altieri. “Like almost all the watches in my collection, it found me. There is a local real estate developer in my area that bought this watch brand new at Bucherer in Switzerland. He wore it his whole life, but when he found out how much it was worth now he didn’t feel comfortable wearing it anymore. He read about my collection and knew I’d pay full value for it, so he came to see me and I bought it.”

But Altieri says there are still some that get away, like a Rolex Ref. 6536. He already owns 8 of them, but this one had a red depth rating on the dial…

If you’re fresh to the hobby of watch collecting, just be prepared that, like most watch collectors, your interest may develop into full-blown obsession.