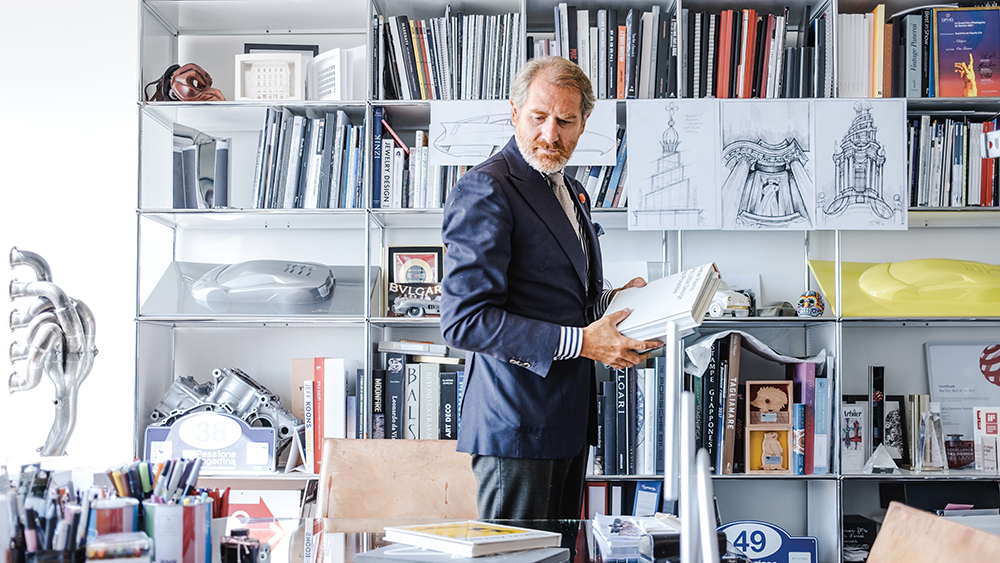 Bulgari’s Naples-born, Rome-raised product creation executive director, Fabrizio Buonamassa Stigliani, is a man of numerous talents. A healthy obsession with how luxury objects should look and operate means that anything more than a passing chat with him is liable to be complemented by spontaneous visual embellishment, as he makes sweeping gestures with pen on paper as he talks. Indeed, his sketches of watches, jewelry, cars and so much else pepper his Instagram feed (where, first and foremost, he calls himself an “industrial designer”) and are constant companions wherever he goes.

Now in his early 50s, Stigliani began his career at Fiat Style Centre in Turin, and he joined Bulgari in 2001. One of his first tasks at the Italian luxury house back then was to design a bracelet for the Gérald Genta Octo complications. His most recent assignment was designing the Octo Finissimo Skeleton 8 Days, but earlier this year two 10th-anniversary editions were released with dials designed to mimic his own sketches. And since 2014, the Octo Finissimo has set eight world records including the Ultra, which upon release in March 2022 was the thinnest watch in the world at 1.8 mm thick. (It was recently eclipsed by Richard Mille’s 1.75 mm RM UP-01 Ferrari, which debuted in July.)

Record setting aside, Stigliani also wins plaudits aplenty for his sartorial flair, notable even by Italian standards, proving his eye for personal design is thoroughly polished from wrist to toe.

What do you collect and why?

I have a collection of pens. In the past, I used a lot of fountain pens because I was obsessed by the color of the ink. The ink is Iroshizuku, produced by Pilot in Japan and is absolutely amazing in terms of gradients and shades.

I was flying to Japan over Europe, and it is not possible to pass through the Russian sky, so my plane was obliged to pass over the North Pole. The sky was amazing because you can see all the icebergs and all the snow. Honestly, we spent two hours with our faces to the window.

Outlook, WhatsApp and Instagram. I receive so many messages on Instagram saying things like, “We love the Octo [Finissimo]” or “I would love to have this watch, which is limited edition, which is completely sold out.” Honestly, I try to reply to everybody, but wow.

The common blue blazer that every gentleman wears, and I often wear jeans and loafers. Most of the time my jackets are made by my tailor, Giuseppe Carbone, in Rome.  The last pair [of loafers] I bought were from Barrett, an Italian company in Parma. And for denim, which is a small obsession, I even had shoes and three suits made. I used to wear denim very stiff and heavy, often from Japan or Europe. I wear Lee, for example, and I have many Levi’s.

I cook mostly for the kids, but I’m not too bad at all’Amatriciana and dishes in Italy that we call calamarata. I would like to make a cacio e pepe, but I’m still working on it.

I love creating objects and imagining them in my head, so I am lucky that my work is my real passion. But the only time when the thoughts in my head will stop is when I ride my motorbike, as I have to fully concentrate on the road.

If you could learn any new skill, what would it be?

I would have liked to learn to play a musical instrument, such as piano or guitar. I love music, but I have devoted my life to drawing and learning to draw, and regrettably I have never taken time to really learn to play.

I’ve never thought about it, because if you think about your successes, then you’re concentrating on the past. You have to build on success.

Honestly, I have so many pens, but the most recent one I’m very attached to because a very good friend of mine, who is a journalist, gave it to me as a gift because it’s not possible to buy. It’s a ballpoint pen made by Dyson. It’s amazing because it’s made in aluminum and has really impressive finishing and details.

This is part of my DNA, my way of thinking. One of my bosses told me, “Fabrizio, you are unique because you are instinctive, but you are able to manage things with your brain.” It must be a good mix because otherwise you are an artist, not an industrial designer. If you are pragmatic without any emotion, you are more like an engineer, so the designer is a bit in the middle of an artist and an engineer.

For vacation this summer in Sardinia and Capri. Ninety-nine percent of the time it is when I’m in the South of Italy.

I am not a slave to my e-mail. I prefer to have a phone call.

What’s the car you’re most attached to?

I’m attached more to the coachbuilders than the brands, because after WWII, Italian coachbuilders made amazing pieces of art. [Luigi] Gino Macaluso, the former owner of Girard-Perregaux, said, “The car in the automotive industry is one of the most important expressions of art of the last century.” I totally agree with him because Carrozzeria Touring, Pininfarina and even Bertone and Italdesign do an amazing job. I’m also very attached to the cars made by Franco Scaglione and Sergio Scaglietti.

What was your last streaming binge?

I love Pixar films. I love the obsession for details, textures and light. The last one I saw was Lightyear. And I watched Rise on Netflix with my son Julio because he is obsessed with basketball.

What music makes you happy?

I love jazz, instrumental music and Italian music from the ’60s, ’70s and ’80s, like songs played by Mina. But mostly I listen to jazz and bossa nova a bit, because my father was in love with it.