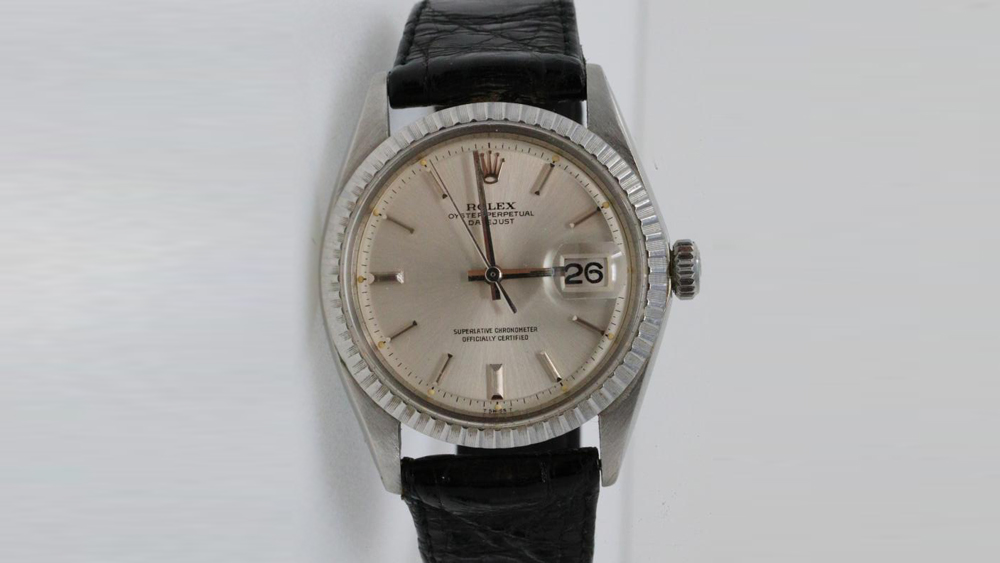 GWS Auctions just put the literal godfather of all watches up for sale. Marlon Brando’s personally owned Rolex has hit the block in a live online auction of Hollywood memorabilia that will end on May 11th at 10:00 A.M. PST. Brando’s Rolex—a stainless steel 31mm Datejust on a black leather strap—was gifted to the actor in 1973 just after he won the Oscar for his role in The Godfather.

The back of the watch comes engraved with “Vito’s & MB”, a reference to his character Don Vito Corleone. Brando only kept the watch for a few years before gifting it to his friend, Academy Award-nominated designer Patricia Norris, in 1976. The watch comes to auction from its current owner, who purchased it from Norris’ estate after she passed away.

The watch appears to be in good condition and has no obvious signs of refinishing. And while there is a letter of authenticity from its owner stating that the watch was purchased from Norris’ estate, there’s no official record of how this watch found its way into her possession in the first place, which may be why it didn’t come up for sale at a bigger auction house. But just when you thought you were out, we’re going to pull you back in: the current bid is just $11,000, which seems reasonable considering Elvis Presley’s Omega went for over $1 million, and Paul Newman’s Rolex sold for over $17 million when they were auctioned.

If you don’t feel like taking a gamble on the Godfather’s Rolex, there are plenty of other fun—and less expensive—lots in this auction. Elvis Presley’s gold Bulova Accuquartz watch engraved “KING” on the back, which was gifted to Memphis Mafia member Richard Davis, is also on the block with a current bid of just $1,000. You can also own Frank Sinatra’s black patent leather evening shoes, with a starting bid of $300, or a signed letter dated July 7, 1938 from Howard Hughes documenting his record-setting flight around the world in a Lockheed 14 Lodestar Monoplane.