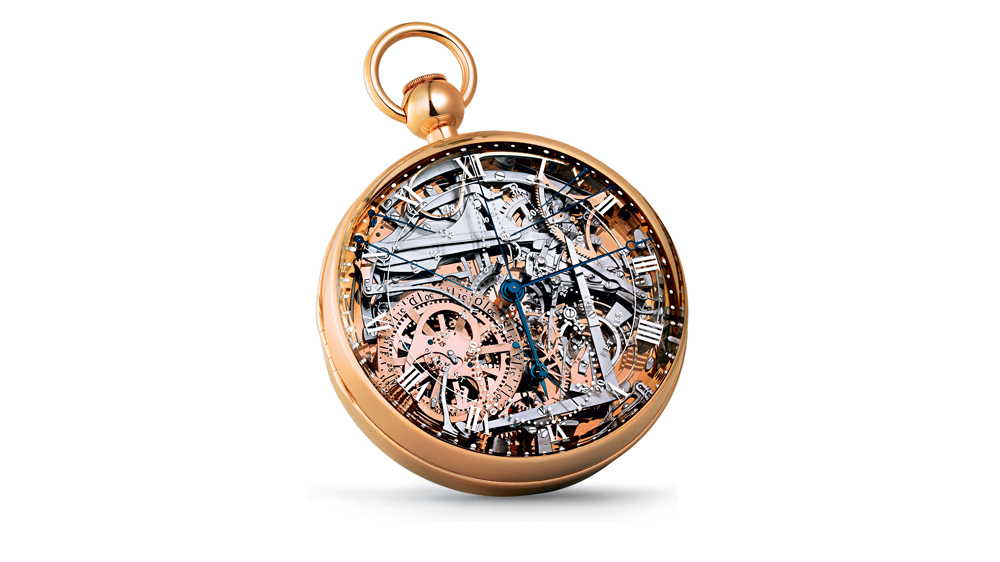 You might know that Breguet is famous for inventing the tourbillon, that it was the first watch company to feature the guilloché technique on its dials, or that founder Abraham-Louis Breguet is widely regarded as the best watchmaker of his time. But what you probably didn’t know is: Napoleon Bonaparte was a client before he became emperor, Breguet made the most complicated pocket watch ever created for Marie Antoinette (completed, unfortunately, after her execution), and the family was later known for making airplanes and bringing the telephone to France. Take a walk down memory lane as we retrace some of Breguet’s biggest historical coups in Paris and beyond.

1783-1827: Breguet Creates the most complicated pocket watch ever created for Marie Antoinette

As is fitting for one of the most infamous royals in history, Marie Antoinette’s pocket watch was the most extraordinary timekeeping invention of its time—and remains one of the most complicated pocket watches ever created to this day. It’s also symbolic of her very short and very complicated time on this earth. The queen first commissioned the pocket watch in 1783, requesting that the watchmaker create a timepiece with every complication and every refinement known to man at the time. There was to be no limit to its cost or construction time and gold was expected to be used wherever possible.

The self-winding watch includes a minute repeater, a full perpetual calendar, the equation of time, a power reserve indicator, a metallic thermometer, an on-command independent seconds hand, a small sweep seconds hand, a lever escapement, a gold Breguet overcoil and a shockproofing. It has been likened to shrinking a cathedral clock into a pocket watch. Unfortunately, it would take 44 years to create this elaborate timepiece—it had to be finished by Abraham-Louis Breguet’s son—and Marie Antoinette would never live to see it. She was beheaded during the French Revolution on October 16, 1793.

The pocket watch currently resides in the L.A. Mayer Museum for Islamic Arts in Jerusalem.

1798: Napoleon Bonaparte makes his first Breguet purchase as a general in the French Army

Before he became the first emperor of France, Napoleon was a general in the French Army. At the turn-of-the-century in 1798, 29-year-old Napoleon was about to embark for Egypt on a campaign, also targeted at Syria, to defend French trade interests, but also to help establish his political power.

Just a few weeks before his departure, he purchased Breguet’s first carriage clock—the record can still be seen in archive books in Breguet’s boutique on 6 Place Vendôme in Paris. It came with an eight-day movement and a Breguet overcoil glazed on four sides. The quarter-repeating calendar clock with a moonphase indicator came in Neo-classical gilt bronze with Doric columns. It was the predecessor of the modern travel clock and presumably helped Napoleon time his military advances.

The clock now resides in the Swiss National Museum.

Napoleon’s first wife and the first empress of France, Joséphine, was also a Breguet client. Shortly after her husband bought his own watch, Madame Bonaparte (as she was known then) purchased this Breguet “touch watch,” which now resides in the Breguet museum above the boutique on 6 Place Vendôme, which allowed the empress to politely read the time with just her fingers. The position of the arrow relative to the diamond hour markers allowed Joséphine to tell the time without ever taking the watch out of her pocket—a useful function for making a polite escape from a dinner party. It also used to house a portrait of Napoleon, which unlike the watch, did not survive the wear and tear of time.

1812: Breguet created the first wristwatch for the Queen of Naples

The Register of the first wristwatch  Courtesy of Breguet

Officially begun in 1810, the ultra-thin repeating watch, which was oval in shape, came equipped with a thermometer and was the first watch to be mounted on the wrist. Its bracelet was made of hair entwined with gold thread. It was received by Caroline Murat, the Queen of Naples and Napoleon’s younger sister, in 1812. Seventeen people worked on the watch, as seen in the documentation above. The queen would go on to purchase another 34 clocks and watches from Breguet. The modern Reine de Naples watch has since become one of Breguet’s bestselling women’s timepieces.

By 1886 there were 150,000 people in the U.S. with a telephone. But it was the Breguet family that brought this life-changing invention to France. Just a few months before Europe first laid eyes on the telephone at the Universal Exposition in 1878, Antoine Breguet—son of Breguet founder Abraham-Louis Breguet and a scientific instrument maker—presented the device to the Académie des Sciences where experts were initially dumbfounded by its simplicity. The early telephones pictured above were donated by Breguet’s widow, Marie Breguet, to the Musée des Arts et Métiers in 1884, where they still remain today, at 60 rue Réaumur in Paris.

1889: Louis Breguet leaves his mark on the Eiffel Tower

When Gustave Eiffel built Paris’ most famous modern monument for the 1889 World’s Fair, he was clever enough to engrave the names of the 72 French scientists, engineers, and mathematicians that contributed to its construction—ensuring that they would have an even more vested interest in seeing the tower remain standing despite the calls for its destruction. The Breguet name, thanks to scientist Louis Breguet, can be seen today on the Northeast side of the tower.

The Breguet family also worked on early precursors to the helicopter known as gyroplanes or quadcopters. Louis Breguet, son of Antoine, along with Professor Charles Richet developed the Gyroplane No. 1 in 1907 in the Breguet Aviation factory in Douai, France. It had four rotors, each 8 meters in diameter, and was driven by a 40-horsepower “Antoinette” engine. It weighed approximately 1,208 pounds and could only be maneuvered vertically. It first took flight with a man on board on August, 24 1907.

In 1935, this invention led to the development of the Laboratory Gyroplane, the first version of the helicopter that looked more like what we know it as today. It was built with René Dorand and would eventually be destroyed in 1943 during an Allied air attack at Villacoublay.

In 1908, Breguet had also turned his interest to winged flight, and in 1911, along with his brother Jacques, created the Louis Breguet company. That year, pilot Henri Brégi took the first long-distance flight in Morocco, from Casablanca to Fez, aboard Breguet’s military-type biplane. Incredibly, it’s fuselage was made from wood covered in canvas and its wings were reinforced with aluminum. It flew for 2 hours and 50 minutes and was donated in 1912 to the Musé des Arts et Métiers, where it still hangs today, suspended from the building’s cathedral-like ceilings.

As if she commanded it from the heavens, a bolt of lightning that struck Marie Antoinette’s favorite oak tree would set in motion Breguet’s restoration of the queen’s favorite retreat. When Breguet employees read of the tragedy that had befallen the tree, forcing it to be cut down, they proposed to Breguet’s owner and Swatch Group founder, Nicolas G. Hayek Sr., to get a piece to fashion to the replica of her famous pocket watch (construction of a replica had begun to replace the original when it was stolen in 1983—it was eventually recovered in 2007, the year restoration began on Le Petit Trianon).

“We contacted the Palace of Versailles and received a generous offer of the wood,” recounts Hayek in The Petit Trianon: Marie Antoinette’s Domain. “The head gardener took advantage of this initial contact to ask whether the Breguet watch company could make a symbolic contribution to the restoration of the Petit Trianon or of a few busts to the park. After learning about the full extent of the project, I sent confirmation to Christine Albanel, then president of the Museum and National Domaines of Versailles, that I would be interested in financing the entire project.”

The brand spent €7 million to restore the effects of time on the chateau. That contribution helped bring key areas, like Marie Antoinette’s music room (located beyond the gardens and not yet open to the public), library, bedroom, and parlor room back to their original splendor.