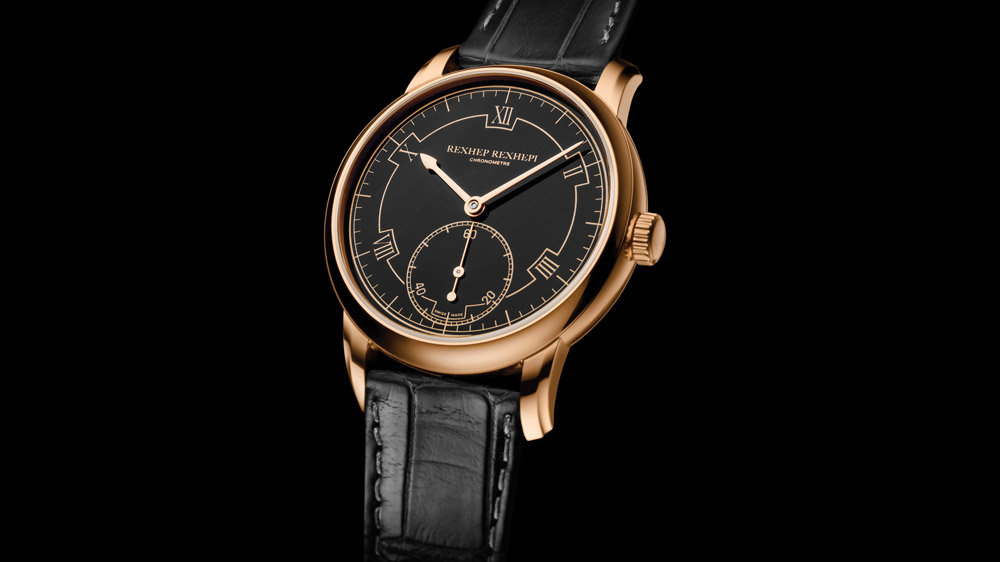 On a ranking of the world’s most influential watch retailers, Michael Tay, group managing director of The Hour Glass, would sit at or very near the top. Headquartered in Singapore, he spends roughly half the month traveling between the company’s 40 stores—located in cities across Australia, Southeast Asia, and Japan—speaking to collectors at watch get-togethers and overseeing a multi-year process of transformation centered on one goal: To standardize top-notch service across his retail empire so that it mimics what clients might expect from, say, the Four Seasons.

“I really admire how great hotels do it,” he says. “Because it is a culture; a manner of behaving. And to set that culture right takes time. I’ve visited many Four Seasons around the world and each time I visit one there’s this general high standard of service. We could be in Shanghai or Singapore or San Francisco, and you will still receive the same high level of engagement.”

Tay approaches the subject of timepieces with the passion of a collector and the acumen of a businessman intimately familiar with the centuries-long heritage of the high-end watch trade. Who better to comment on the standout introductions of 2018?

Which of the year’s timepieces are you and your clients most excited about?
[At the SIHH show] in Geneva, there were three watches that stood out for me, one for men and two for women. The first was the F.P. Journe’s Chronographe Monopoussoir Rattrapante, or split-seconds chronograph. The aesthetics are just amazing. It has everything you love about Journe—the way he does his dials, the Art Deco font on the bezel. What’s interesting about it is that it’s a highly complex watch. At the same time, everybody loves a split. And this, I think, has everything one needs to find in a contemporary sports watch example of a split-second chronograph.

What were the two women’s pieces that caught your eye?
I also found interesting the launch of the Cartier Crash Radieus. This was a watch I absolutely fell in love with the moment it was released. Not only is it a watch that comes from a distinctive heritage—the Crash was introduced in 1967—I’ve not seen Cartier develop a new case design for the Crash ever, so this is the first time we’ve seen it.

The Audemars Piguet Ladies’ Royal Oak Concept Flying Tourbillon was the other one. It bears the same hallmarks of the case design as the Concept watch, except it’s much smaller, with a 38.5 mm case, with either baguette- or brilliant-cut diamonds. It has a completely new movement construction. If you dig deep into that, it looks like an AP Royal Oak but it’s in a Concept case and I think it’s super interesting. They’ve been able to craft a really nice feminine case design around it.

Are your clients gravitating to these models, too?
We speak about this AP Concept ladies watch, but so few have hit the market. We haven’t seen one yet. It’s really for the female connoisseur collector. It’s something I’d like to buy for my partner.

For the Crash Radieuse, we placed our orders the minute the press release came out pre-SIHH. I put them in blind; I hadn’t even seen it yet. I was like, ‘Wow, this is a killer watch. It’s got all the hallmarks of the Crash but it’s got that nice little twist to it with the new case design.’ Those two ladies’ watches are so rare, if you see them, get both of them.

We’ve started to receive a few of the rattrapante chronographs from F.P. Journe and all are spoken for.

What did you see at this year’s Baselworld fair that impressed you?
The first one—and it was literally the first meeting I went to—was the Hublot Red Magic. It falls within the Hublot Big Bang Unico collection. The Unico is basically Hublot’s in-house chronograph caliber. And what is truly incredible about this watch is that they have been able to perfect red ceramic. Red in ceramic is the most difficult color to master. Many brands I’ve spoken to have said red never comes out a bright Ferrari red. Instead, it comes out a dull burgundy red. Hublot was able to make it bright Ferrari red. The first person to be seen publicly wearing it was Karl Lagerfeld. He showed up at a Chanel fashion show wearing it. We haven’t received it yet. (I’m no Karl Lagerfeld.)

On the more accessible front, which Baselworld models stood out?
Rolex and Tudor claimed the GMT market this past year, Rolex with both the GMT in the Oyster steel and Rolesor as well as in the pink gold (my absolute favorite is the Rolesor version, the steel-gold combo).

And Tudor launched two incredible products this year: One was the GMT, but the watch I found most remarkable and most exciting this year was the Black Bay Fifty-Eight. They just delivered them and I’ve been wearing it now for two weeks straight to test it. And I absolutely love this watch. It’s the perfect size for me.

They listened to the market—there is a demand for watches under 40 mm. It’s 39 mm with a much slimmer case. It’s got an in-house Tudor automatic caliber and 70 hours of power reserve. Go away on a Friday and pick it up on a Monday and the watch still keeps perfect time. It’s got a wonderful riveted case design, very reminiscent of bracelets from Rolex and Tudor from the ’60s. It’s an all-around great daily watch. I can’t get over the value of it; there is so much watch for the price you pay.

Which of the Patek Philippe introductions most impressed you?
A lot of talk has been centered around the salmon dial 5270P Perpetual Calendar Chronograph and the new Aquanaut.

The winner of the show, however, was the new ladies’ chronograph: Ref. 7150R/250R. It’s an outlier in Patek Philippe’s 2018 lineup. It’s a manual-wind chronograph that has all the elements of a future classic. It’s a ladies’ watch but the proportions are incredible. If you don’t mind some diamonds, a man can wear it very easily. The beautiful thing is the bezel with its “glass box” construction, which makes the watch appear much larger than it is. It’s not just a flat sapphire crystal on the dial; it pops. The watch is 38 mm, a size which I absolutely love. And it’s a truly new case construction for Patek. What’s nice is when you look at the details of the dial, the sub-registers are slightly sunken, so you get this horizon over the dial. It’s not completely flat. They’re constantly playing with a sense of depth. There are so many details that when you study it, you fall in love. For me, it’s the watch for 2018.

And what did you think of the independent watchmakers you saw in Basel?
The last watch I saw at Basel that really captured my attention was from Akrivia. Rexhep Rexhepi is the watchmaker. He, in my mind, is going to be the watchmaker who defines this generation of millennial watchmakers. The brand has been around for five-plus years but this year they launched something totally incredible.

What is fascinating is that in this day and age of watchmaking, where everybody is focused on innovating and trying to develop the next great complication, he said, “Let’s go back and explore the foundations of watchmaking.” Why did people make watches to begin with? To tell time. The ambition of watchmakers of past years was always to make watches that kept the most accurate time. So he really wanted to focus on the idea of developing a chronometric wristwatch.

He launched the Rexhep Rexhepi Chronomètre Contemporain. Every watch is made and finished by hand in his workshop. Everything is stripped down to its bare essentials. It’s a simple time-only watch with an in-house caliber and 100 hours of power reserve, which is no small feat because it’s not big. It’s just larger than 38.5 mm. I believe they make about 25 watches a year in the whole collection. Essentially, he is this generation’s Philippe Dufour. Philippe is now 70 and Rexhepi is 30 or 31. His desire to make and produce the best finished watches is truly admirable for someone his age. Many people said this was one of the best watches of the year.

We saw a number of high-end watchmakers introduce more affordable steel collections this year. Were your clients receptive to those models?
What we have seen is a convergence of global taste. And it’s increased in the last two years. It seems like everybody in the world wants the same model. And that wasn’t the case two to three years ago.

Until a couple years ago, the mainland Chinese market never really took to technical luxury performance sports watches. It wasn’t their thing. But now, even the mainland Chinese clients are interested in steel professional models from Rolex. Even at the height of China-mania for wristwatches a decade ago, I always maintained that Chinese tastes would converge with international tastes. In terms of cars, they share the same tastes as their Western counterparts. Same with wines. What I think really expanded this interest in watches and what drove this convergence was social media. The fact that the younger generation of Chinese are traveling more, being more exposed to Western tastes and influence.

Which specific models are younger Chinese buyers coveting?
The Rolex steel professionals. We never used to have mainland Chinese clients asking for steel Submariners or Daytonas. China was one of the few places you used to see steel Daytonas sitting in their showcases. And then suddenly, they caught on.

The Nautilus and Aquanaut by Patek Philippe were not their typical cup of chai, but now they are. And it’s driven by the young Chinese consumer, whose tastes are diametrically opposite of their parents, who would have gone for classic, traditional, round case, slim, time-only watches. To the young Chinese millennial consumer, who is very driven by street fashion and a casual form of style, a classic round watch on a leather strap isn’t going to go with what they’re wearing. That’s why brands such as Hublot, Audemars Piguet, Richard Mille, and Patek Philippe appeal to this segment. I think fashion has really changed. The way young people dress today, they’re not as interested in sartorial fashion. They’d rather wear casual T-shirts.

Are there still clients for dress watches?
There’s still a segment of the market that will desire one good dress watch—the enthusiast and connoisseur community. But I don’t see this focus on technical luxury performance sports watches dissipating anytime soon.