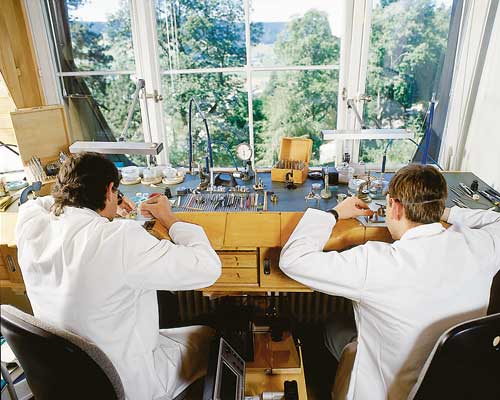 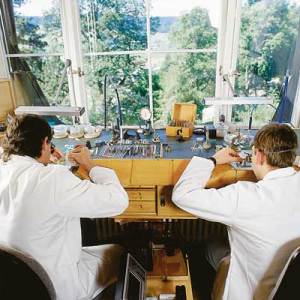 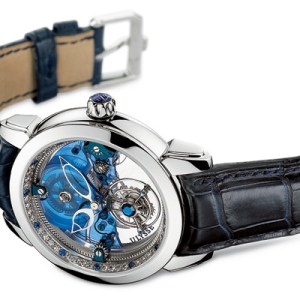 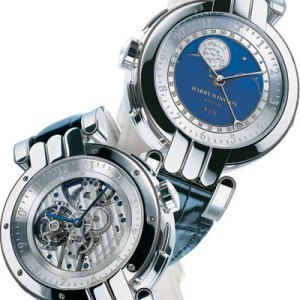 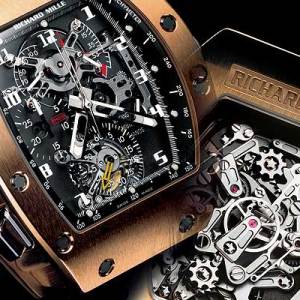 Rolf Schnyder, president and CEO of Ulysse Nardin, sounds like an expectant father when he describes the final touches being applied to his company’s new Royal Blue model. The brand’s latest achievement features a flying tourbillon that floats between movement plates made of transparent blue sapphire crystal rather than the usual solid metal. His enthusiasm is not dampened by the fact that much of the watch’s development, including the vital engineering of the tourbillon movement, did not take place at Ulysse Nardin. The Royal Blue has a surrogate parent: Christophe Claret, one of a handful of complicated watch specialty houses that perform a significant amount of the complex and demanding watchmaking for Switzerland’s most prestigious brands. Christophe Claret, Renaud et Papi, and Dubois Dépraz are among the companies that work behind the scenes for a roster of clients they will not divulge. Only now, as the most inquisitive collectors investigate the manufacturing pedigrees of their prized pieces, is the specialists’ crucial role in the advancement of complicated watchmaking coming to light.

Top-tier watch companies long have resisted disclosing any information about their established relationships with independent watchmaking specialists, and their secrecy is understandable. After spending millions of marketing dollars each year publicizing their watchmaking expertise, most naturally are hesitant to reveal that some of the skills behind their pieces belong to outside firms specializing in tourbillons, minute repeaters, chronographs, or other complications. A further incentive for companies to keep their outsourcing under wraps involves the perceived superiority associated with a brand’s manufacture status—the ability to build complete movements in-house.

Among his peers, Ulysse Nardin’s Schnyder is an anomaly. Not only is he forthcoming about his collaboration with Christophe Claret, he takes pride in the arrangement. He also notes that such partnerships are common in the Swiss watch industry. “What really matters is the creative concept,” Schnyder says. “Royal Blue, which is essentially an aesthetic variation of our Genghis Khan tourbillon, without the Westminster chimes, was my idea. We used Claret for the initial development process, but we will do the production of the pieces.” The fabrication of the Royal Blue’s most striking elements, the transparent blue sapphire crystal plates and bridges, was contracted to yet another specialist, while Christophe Claret designed and engineered the parts for the flying tourbillon and made the mechanism work.

In 16 years, Christophe Claret has transformed the small independent company bearing his name into one of the most influential forces in complicated watchmaking—while remaining relatively anonymous outside of the industry. Highly driven and regarded by some as temperamental and unyielding, Claret has built a manufacturing facility in Le Locle that rivals those of established brands. In addition to conducting the kind of technical R&D demanded by Ulysse Nardin’s Royal Blue, the firm manufactures its own proprietary movements, which it sells, sometimes with modifications, to a variety of clients.

Last year, Claret collaborated with Harry Winston on the company’s Opus IV, a massive double tourbillon, and as his contributions to that timepiece and the Royal Blue indicate, he has an affinity for tourbillons. However, Claret also enjoys working on multi-gong repeaters, sonneries, and other sophisticated musical watches that his company manufactures for high-profile brands. “I prefer to submit ideas to clients,” says Claret. “We can then work together, so the final product fits the character of each brand.”

Claret achieves these groundbreaking movement designs in an environment that sharply contrasts with the industrial sterility pervading most Swiss watch factories. Here, behind each garret door of Claret’s 19th-century manor house, a team of watchmakers, most of whom appear to be in their 20s, toils away to the beat of alternative rock. Despite its youth, Claret’s staff has cultivated the delicate touch for assembling tourbillon cages, and the artistic ear for fine-tuning the gongs in minute repeaters. It is as if Claret, who came of age in the 1980s with Michel Parmigiani and F.P. Journe, is running a hatchery for the next generation of complicated watchmakers.

Although Claret has staked out the ultrahigh complication territory, specialty houses actually play a much broader role in the industry. For example, Dubois Dépraz in the Vallée de Joux revolutionized complicated watchmaking by popularizing the use of modules, a construction employed in the majority of fine Swiss mechanical watches that feature extra functions such as power reserve indicators and chronographs. Modules are thin mechanisms that can be placed on top of simple, readily available base movements, transforming them into GMTs, chronographs, even perpetual calendars. Breitling, a longtime collaborator with Dubois Dépraz, uses a module powered by an accurate and reliable automatic movement to create chronographs that consistently merit chronometer certificates.

The specialty houses’ expertise-for-hire has not only enabled brands lacking the requisite in-house resources to produce highly complicated watches, it has empowered many of the companies collaborating with specialty houses to infuse the traditionally conservative field with refreshing creativity.

Chief among these is Richard Mille’s eponymous brand, which, through a partnership with specialty house Renaud et Papi, produces some of the industry’s most exclusive and innovative timepieces. Mille’s latest creation is the RM008, an integrated chronograph tourbillon, a double complication that very few brands attempt. Like Mille’s other tourbillons, it features a suspension triangle tourbillon cage, a flexible auto-themed construction devised for shock absorption. To test its performance, Mille recruited a Formula One driver to wear the watch while in the cockpit for a season. While Mille conceives innovative features—such as the cage design and the chronograph’s low-inertia titanium column wheel that starts and stops with greater accuracy—Renaud et Papi assesses their feasibility, then builds the parts and finesses them into working mechanisms. “Sometimes the process involves a little fighting as well,” says Mille. “Giulio Papi [Renaud et Papi co-founder and technical director] and I sometimes work things out over the telephone at three in the morning. But I consider myself lucky to collaborate with an organization that shares my passion.”

For years, Renaud et Papi has maintained close ties with Audemars Piguet, which recently increased its ownership stake in the specialty house to 80 percent and invested millions of Swiss francs in a new manufacturing facility in Le Locle. The acquisition and investment are consistent with Audemars Piguet’s determination to preserve its independence and its reputation for producing superior complicated timepieces; the company developed some of its most impressive recent achievements, including last spring’s Royal Oak Tradition of Excellence Cabinet No. 4, in conjunction with Renaud et Papi. Meanwhile, Renaud et Papi’s partnerships with clients such as Mille, which Audemars Piguet management must approve, generate revenue for the mother company while providing a pipeline for design ideas. For example, Audemars’ Royal Oak Concept, which debuted in 2002, bears the unmistakable stamp of Mille’s distinctive style.

Audemars Piguet is not the only established watch brand that owns a specialty house. Vacheron Constantin, which had relied on a variety of outside suppliers through much of its recent history, purchased the complicated watch specialty firm Haute de Gamme in 1998. The renamed Vacheron Constantin Vallée de Joux immediately provided the industry’s oldest watch company with in-house development, exclusive movements, and complicated techniques—assets that are expected from such a prestigious marque. Although Haute de Gamme abruptly severed ties with many of its clients following the sale, the workshop retains a number of confidential alliances.

As the big brands acquire the existing specialty houses, others, such as Parmigiani’s new Vaucher Manufacture, are emerging to fill the industry’s growing demand. Specialty houses thrive because they are the most economical way for companies to develop and produce their limited numbers of complicated watches. And their expertise places them at the forefront of development, as evidenced by some groundbreaking  escapement designs that are expected to be unveiled in the coming months. Still, only a small minority of watch industry executives—Rolf Schnyder and Richard Mille among them—are willing to disclose publicly their partnerships. In light of how voracious collectors are becoming for information about every detail of a timepiece, Schnyder and Mille are perhaps exhibiting as much prescience as candor with their transparency. “People today want an incredibly sharp product,” says Mille, “and they don’t want a story that doesn’t correspond with reality.” As watch lovers learn more about the mechanisms on their wrists, other, less forthcoming manufacturers may have some explaining to do.