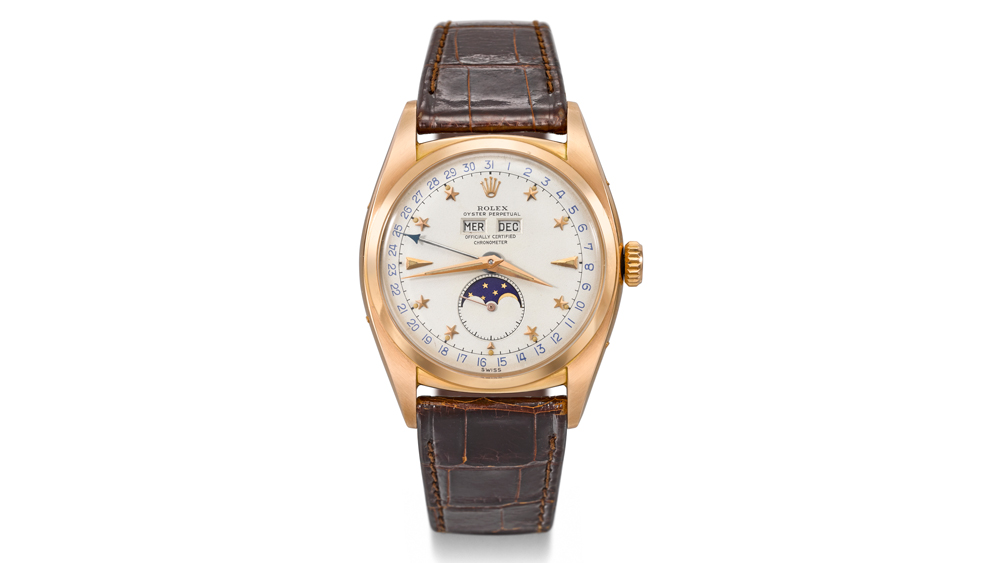 In the search of your holy grail watch? You might find it at one of Geneva auctions this weekend. Christie’s, Phillips, Sotheby’s and Antiquorum are set to sell a group of watches worth a collective high estimate of CHF 61.3 million (at current exchange all CHF prices are roughly the same in U.S. dollars). Estimates for individual pieces in these sales range from less than $2,000 to over $2 million. Last year, Christie’s, Sotheby’s, and Phillipsraked in a combined $64 million at their spring sales, with Phillips selling the most expensive timepiece—the Rolex “Unicorn”— for $5.9 million. Which house will take that crown this year remains to be seen. Below, a summary of the important watches up for grabs this season.

Christie’s Rare Watches sale is offering a pink gold Rolex ref. 6062, a triple calendar watch with a moon phase complication. It’s known as the “Stelline” because of the star-shaped markers on the dial. It is one of only two triple calendar models made by Rolex—the other was the ref. 8171 Padellone.

“The ref. 6062 was limited to only a few hundred watches—scholars estimate the number to be around 500—over 10 years,” says Sabine kegel, head of Christie’s watch department Geneva. “Only 50 were made in pink gold and only about 10 of those with the Stelline dial. About 350 were yellow gold and 100 were steel.”

Another Christie’s lot with a high estimate is a rare Patek Philippe ref. 2499 made in 1977. This perpetual calendar chronograph was made in four series over a period of 35 years, for a total of only 349 examples, about 10 per year. The piece in the auction is a third-series version in 18k yellow gold, estimated at CHF 500,000-800,000.

The high estimate of Christie’s Rare Watches sale is $12 million. It will be held May 13 at the Four Seasons des Bergues.

One of the hotly anticipated lots of the season is popping up at Phillips’ Geneva Watch Auction: Nine. Noted watchmaker George Daniels made this one-of-a-kind grand complication pocket watch in 1987 and was the only person to ever wear it. The piece, which is estimated to sell for more than CHF 1.5 million, is being sold by a private collector who may have acquired it at a Sotheby’s auction of Daniels’ timepieces following his death in 2012, when it sold for just under $1 million. The watch, which took 4,500 hours to design and create, is a yellow gold perpetual calendar and minute repeater with moon phases, thermometer, power reserve, equation of time, annual calendar and a one-minute co-axial tourbillon.

The second highest lot in the Phillips auction is a Patek Philippe ref. 5208P, a platinum grand complication with minute repeater, chronograph, perpetual calendar and moon phase, estimated to sell for CHF 550,000-950,000. Made in small numbers between 2011 and 2018, the platinum version is rare. This piece was made in 2015 and contains one of the brand’s most complicated movements, with 701 components.

The high estimate of the entire Phillips auction is CHF 25.3 million. It will be held May 11 and 12 at Hotel La Reserve in Geneva.

“Fewer than 200 pieces were made, and only 20 in pink gold,” says Sam Hines, Sotheby’s senior director of watches. “This one, which is in exceptional condition, was last on the market close to 20 years ago. This one is notable for its Vichet-made case, with longer, more prominent lugs shaped like claws. There are thought to be only six examples known.”

“This watch was last on the market in 2009,” says Hines. “It is a fine example of the reference 1518. The lugs are nice and thick and the hallmarks are very easy to see.” This one is distinguished by the FAB. SUISSE signature on the dial, a designation indicating it was made for the French market. It was sold by Guillermin and bears the retailer’s mark.

The high estimate of the entire Sotheby’s Important Watches auction is CHF 11 million. It will be held May 12 at the Mandarin Oriental in Geneva.

Antiquorum is also holding a sale in Geneva this weekend, and its top lot is a Jaquet-Droz & Leschot clock estimated at CHF 1,000,000-2,000,000, made around 1795. The 18k gold, enamel and pearl clock takes the form of a scent bottle and has a concealed singing bird.

“This is a real masterpiece, and possibly one of a kind,” says Julien Schaerer, Antiquorum’s managing director and watch expert. “This is a piece of art; the few existing similar artworks belong to museums.”

The second highest estimate in the sale is CHF 300,000-400,000 for a Patek Phillip ref. 3974, a model launched in 1989 to celebrate Patek Philippe’s 150th anniversary. It was the world’s most complicated wristwatch at the time, and was discontinued in 2000. Very few pieces were made due to its extreme complexity.

“We are thrilled to present one of the most complicated watch mechanism of all time, directly from its original owner with complete papers and accessories,” says Schaerer. “It was one of the first ref. 3974 watches to be produced.”  The watch, which was received as a gift to family that is selling it, is in virtually unused condition and has never been polished.

The high estimate of the entire Antiquorum sale is CHF 15 million. It will be held May 11 and 12 at the Beau Rivage hotel.