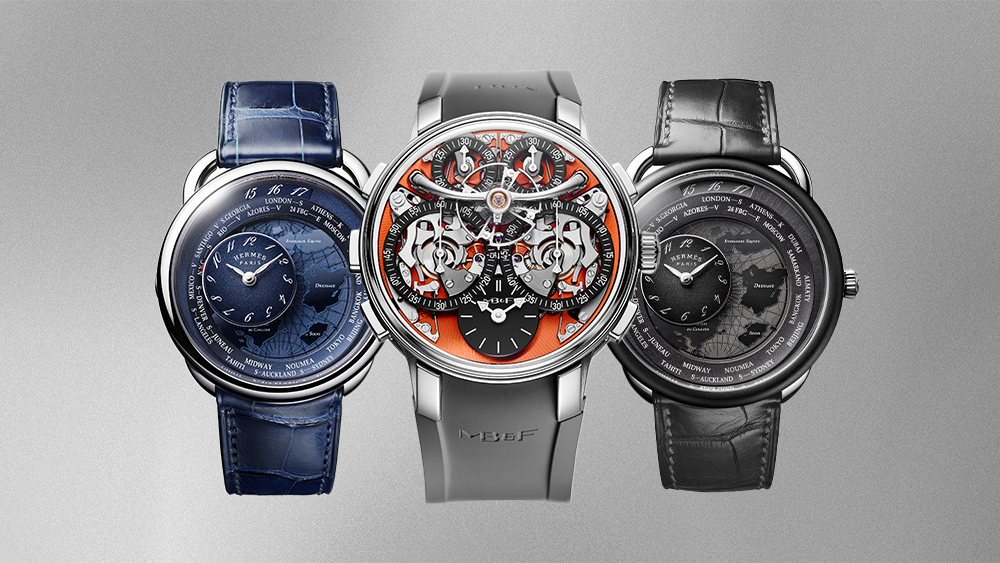 The top prize, the Aiguille d’or Grand Prix, was awarded to MB&F (Max Büsser & Friends) for the Legacy Machine Sequential Evo, a dual chronograph with two complete chronographs that allow multiple timing modes: split-second, independent, lap timer and even a “chess match” timing mode, a combination of functions never seen before in a chronograph. It has a world-first patented “twinverter” binary switch that switches the start/stop status of the LM Sequential EVO’s dual chronographs simultaneously. each chronograph can be started, stopped, and reset completely independently of the other, using the start/stop and reset pushers on their respective sides of the case. The manual wound movement, created by Belfast watchmaker Stephen McDonnell, to whom busser refers as “a genius,” also incorporates a special amplitude regulating system that saves energy, even when both chronographs are running.

MB&F also won the Challenge prize, awarded to a watch priced under $3,500 (now selling for up to $14,000 on the secondary market), for its M.A.D.1 Red, conceived for MB&F friends and “tribe members.” It has a luminated lateral time display running along the case side and, on the dial side, an openworked triple-blade winding rotor that spins over a red background ring, with a touch of Super-Luminova to add drama.

The coveted Men’s Watch prize was picked up this year by celebrated independent watchmaker Rexhep Rexhepi for his Akrivia brand Chronomètre Contemporain II, a manual-wound hour/minute watch with deadbeat seconds. The piece combines classic design and finishing and a “piano black” grand feu enamel dial with a modern design that reinterprets the traditional sector dial of the 1930s and ’40s. The seconds register is finished with a hand engraved gratté pattern covered with translucent gray enamel. As the follow up to the first version of the Chronomètre Contemporain, this one has a redesigned caliber with a balance that provides 60% more inertia than the previous edition, and a mainspring that delivers 40% more torque.

Bulgari picked up the Jewelry prize for its Serpenti Misteriosi High Jewelry, a serpent motif secret watch with bracelet links designed as overlapping serpent scales. It is set with diamonds, turquoise and rubellite, and powered by one of the world’s smallest movements, a manual-wound in-house micro-caliber that is charmingly called the “Piccolissimo.”

Bulgari also won the Audacity prize (awarded to a watch that demonstrates “a non-conformist, offbeat approach to watchmaking”) for its Octo Finissimo Ultra 10th Anniversary, the 1.80mm-thick watch that, at the time of its release, held the world record as the world’s thinnest timepiece (it has now been eclipsed by Richard Mille’s RMUP-01 at 1.75 mm). It was entered in the Mechanical Exception category, a prize that was ultimately awarded to Ferdinand Berthoud for its Chronometre FB 2RSM.2-1, a tourbillon with fusee-and-chain transmission incorporating a stop-seconds mechanism and an independent deadbeat seconds. It was developed in collaboration with a young apprentice watchmaker who devoted his graduation project to it. The student, Simon Debaz, won the prize for the best young student at Geneva Watchmaking School.

Hermès won two awards for its Arceau Le Temps Voyageur, including the Ladies’ Complication prize for the platinum 38mm version and the Men’s Complication prize for the steel 41mm version. It differs from traditional world timers on which time is simultaneously displayed for the various time zone cities. With the Arceau Le Temps Voyageur, it is the satellite subdial that travels from city to city, changing the face of the watch as it shows local time. The movement, three years in development, is based on the Hermès in-house caliber H1837, integrated with a special 122-component world time module created by Chronode.

Van Cleef & Arpels also picked up two awards: one in the brand new Mechanical Clock category for its exceptionally creative Fontaine Aux Oiseaux automaton (also a Robb Report “Best of the Best” 2022 winner), an amalgamation of the talents of automaton makers, jewelers, setters, lacquer specialists, enamelers and lapidaries; and the Innovation prize for its Heures Florales Cerisier (another Robb Report “Best of the Best” 2022 winner), in which the hours are revealed via the opening and closing of flower petals on the dial.

Representing one of the best decisions of the year by the panel (and the GPHG Academy members, of which this writer is one, who judged the preliminary rounds) is the Ladies’ prize, which was awarded to Parmigiani Fleurier for its sleek, minimalist Tonda PF Automatic. It is a smaller (36mm) version of a great men’s design (which has come full circle to be considered a good thing), with an 18k rose gold case, knurled bezel, finely guilloched dial and, best of all, only a subtle application of diamonds serving as hour markers.

Each year, the GPHG awards a Special Jury prize not to a watch or a brand but to a personality, institution or initiative that has played a fundamental role in promoting high-quality watchmaking. This year’s recipient is Francois Junod, an automaton specialist who combines contemporary artistry with the traditions of automaton making.

Here is the full list of winners of the GPHG 2022: