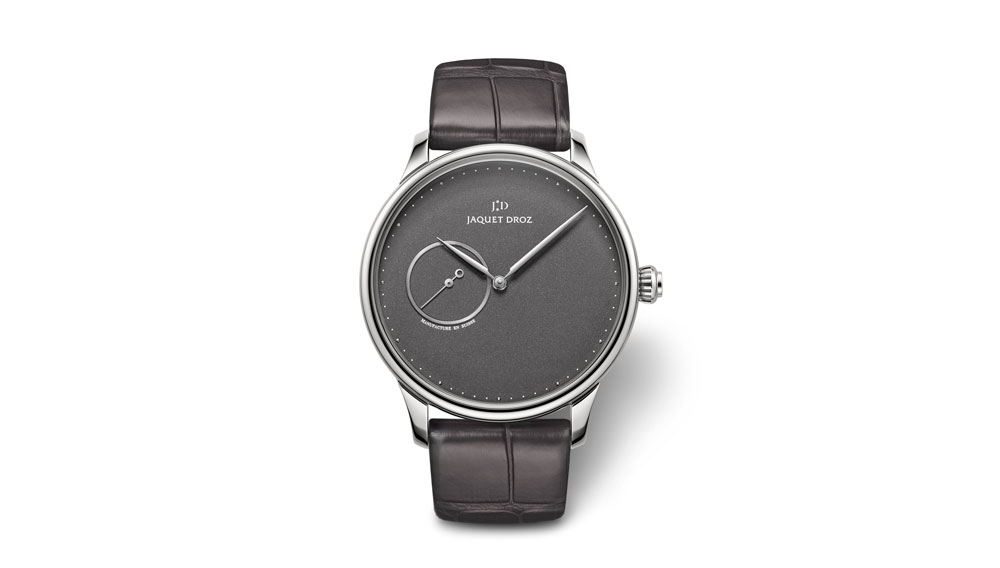 Swiss watchmaker Pierre Jaquet-Droz and his son Henri-Louis rose to prominence in the 18th-century by crafting complex mechanical figures that could draw, write, and play music. Two hundred and eighty years later, the boutique watch company they inspired routinely unveils impressive new mechanical objects and treasured timepieces. This month, Jaquet Droz released two new variations of the Grande Heure Minute in its Astrale collection. Though the collection pays homage to astronomy (an ancient, distant cousin of watchmaking), the pair of ultra-minimalist additions are a sharp departure from more intricate dials and moon phase indicators found on other watches in the collection.

Prospective owners can choose between a slate-gray dial with blued hands and a silver-plated dial with rhodium-plated hands. Silver rhodium-plated studs serve as five-minute markers on both timepieces, and a rhodium-plated ring adds a subtle distinction. A composition inspired by the starry skies is punctuated by the brand’s off-centered seconds hand at 9 o’clock. Encircled by an off-centered ring, the hand is reminiscent of a celestial body. Designed to mimic the magic of the heavens in an understated way, both watches feature only the bare essentials on the dial (hours, minutes, and seconds).

The understated watches are sheathed in a 43 mm steel case and powered by a high-precision self-winding movement: the Jaquet Droz 1169.Si caliber. (“Si” refers to silicon, a key contemporary watchmaking ingredient that is rust-proof, non-magnetic, and unaffected by temperature fluctuations—making it the perfect element to use to ensure longevity and astronomical precision.) Rapt attention to detail ensures that each timepiece operates flawlessly. And a 68-hour power reserve guarantees that performance can be maintained for nearly three days at a time.

Both serve as a subtle reminder that sometimes you don’t have to look further than your watch to see the heavens. Price is available upon request.