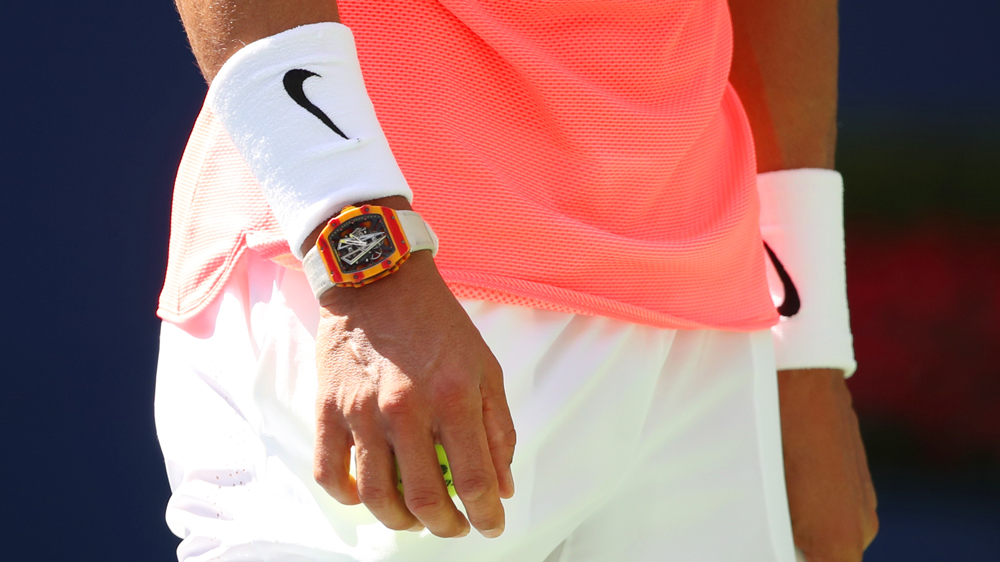 Summer is bracketed by three of the four Grand Slam tournaments of tennis: the French Open and Wimbledon in spring and early summer, and the U.S. Open, which has its finals this weekend. Elite watch brands are eager to place their watches on the wrists of top tennis players, tapping them as ambassadors and doling out millions in endorsement money.

And the exposure is worth it. The U.S. Open is watched by some 700,000 viewers live at the Billie Jean King National Tennis Center in New York City and by just under a million viewers a day on TV. In fact, 1.9 million tuned in for the ladies’ final last year, the largest audience ever. The tournament also generated 18 million interactions on social media and 92 million additional video views. With that kind of mileage, it’s no wonder that brands compete for court time.

The top stars are remarkably loyal to their sponsors. Roger Federer, for example, has been a Rolex ambassador for years. Serena Williams has been associated with Audemars Piguet since 2014, and Rafael Nadal has been sporting a six-figure Richard Mille since 2010—even though he has trouble hanging on to them. Nadal lost a custom $525,000 Richard Mille at the Rogers Cup in Toronto in 2008 and a $370,000 Richard Mille RM027 tourbillon at the 2012 French Open—which was later recovered—and nearly lost one in a locker room. Here is a look at some of the watches that played center court last week.

Since 2010, Rafael Nadal has been wearing six-figure Richard Mille watches on the court, worth more than all the others featured here put together, but he seems to have trouble keeping them. Two have been stolen—one of which was recovered—and he left another behind in a locker room once, where it was retrieved by a fellow player. He is currently wearing the fourth special edition made for him by Richard Mille, the RM 27-03 Tourbillon ($747,000).

Unlike Rafa’s serves, the watch is hard to miss on the court. The red-and-yellow case, which honors Nadal’s native Spanish flag, is made in a complicated process that involves impregnating layers of silica into a specially hardened quartz called TPT. The result is a case that is lightweight and highly shock resistant. It has a 70-hour power reserve with a winding crown shaped like a tennis ball. It is limited to just 50 pieces.

Roger Federer is the most famous of the many Rolex athlete ambassadors. He signed on with the brand in 2006, by which time he had tallied nine Grand Slam wins. Roger has hoisted 11 more trophies since then, all while wearing a Rolex on his wrist. Although he has been known to wear a Sky-Dweller, a GMT-Master II, and a Yacht-Master II, lately he has been wearing his two-tone steel and yellow-gold Datejust 41 with a slate-gray dial and Roman numerals ($11,950). The Datejust is a classic but is considered more sporty than the Day Date, which is only available in gold or platinum. It contains the automatic caliber 3235, with the Rolex-patented Chronergy escapement, made of magnetic-resistant nickel-phosphorus. It is a Rolex-certified Superlative Chronometer, which means it keeps time more accurately than the standard set by the Swiss Chronometer rating institute, known as COSC.

Rolex and Richard Mille may have landed the top two men’s players, but when it comes to female aces, Audemars Piguet has scored the best of the best: Serena Williams, otherwise known as the GOAT (Greatest of All Time). Serena joined Audemars Piguet in 2014 and last year claimed her 23rd Grand Slam, more than any other woman on the court—more than Steffi Graf, more than Martina Navratilova.

Serena Williams at the US Open  Photo: Juergen Hasenkopf/BPI/REX/Shutterstock

Her watch is a rose-gold Millenary ($28,400), which she originally wore with a white strap but changed to a black one this year, probably to match her black catsuit (which has since been banned by the organizers of the French Open) or the black tutu she sported at the U.S. Open last week. It contains a hand-wound Audemars Piguet caliber 5201 in an 18-karat rose-gold case with a mother-of-pearl, off-centered dial.

Seiko reckons Novak Djokovic would have to adjust his watch some 60 times a year with his travel schedule, so it saves him the trouble with the Astron Novak Djokovic Limited Edition SSE174 ($3,000). It has a dual time function that adjusts to local time anywhere in the world at the touch of a button. It is a GPS watch with a precision of one second every 100,000 years. It runs on solar energy and has been coated with Seiko’s unique super-hard black coating, giving it scratch resistance and a uniform jet-black color that will not fade. It is loaded with tennis-themed features: The tennis points system—Love, 15, 30, and 40—is used for four of the minute markers; a star at eight o’clock honors Novak for being one of only eight players in history to achieve a career Grand Slam; and the UTC codes for the four cities that host the Grand Slam tournaments—Paris, London, New York, and Melbourne—are highlighted on the bezel. It is a limited edition of 5,000 pieces.

Compared to the previous stars and timepieces, the Bovet OttantaSei LE flying tourbillon ($173,000) and Pablo Carreño Busta are less well-known—but worth getting to know. Carreño Busta is a Spanish player currently ranked 13 in the world. He has won 11 finals, including the Winston-Salem Open in North Carolina, and has reached the semifinals at the U.S. Open last year and the fourth round of the Australian Open this year. The watch was designed by Pininfarina, the Italian car design firm, which explains why it has the aesthetic star power of an Italian sports car.

The 10-day flying tourbillon is openworked and trimmed with either bronze or blue PVD treatment. The front, back, and sides of the case are fitted with sections of sapphire crystal, framing the movement like a curio cabinet housing a work of art. The 44 mm watch is large but lightweight thanks to its grade-5 titanium case. It is a limited edition of 86 pieces (OttantaSei means “86” in Italian).