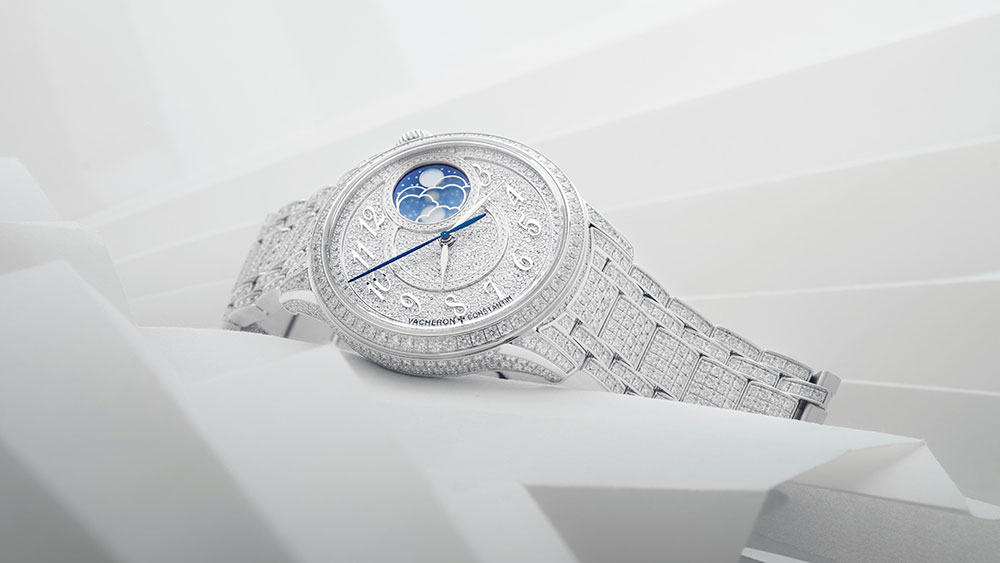 The off-centered subdial is a design code used in 19th-century Vacheron pieces, and often seen now on pieces in its Historique collection. The hands are meant to resemble sewing needles, in reference to the hand craftsmanship that goes into finishing a couture gown, with beading, embroidery or lace. The calligraphic numerals are meant to resemble lace.

The new Egerie collection is one of very few stand-alone lines for women from Vacheron. Past collections include the 1972 (launched in 1972), the high jewelry Heures Creatives models and a previous Egerie collection from the early 2000s that was nothing like the current line. The name Egerie is a metaphor for the female muse, and was original taken from the title of a book, Egeries, dans l’ombre des creatuers (Muses in the Shadow of Creators). Vacheron also references the nymph Egerie from Roman mythology, who was a counselor to kings and an inspirational nymph whose inventiveness inspired artists and designers.

The 18k white gold case of the Egerie Moon Phase Jewelry measures 37 mm wide and 10.53 mm thick. The movement is the manufacture self-winding caliber 1088 L moon phase, used exclusively in this collection. It has a 22k gold rotor and a 40-hour power reserve. It is priced at $164,000, and although not a limited edition, will certainly be produced in limited quantities.

Vacheron Constantin is not new to the world of gemset watches. At the turn of the 18th century the company was making pocket watches for women that hung on long chatelaine chains. By the early 20th century, it was creating jeweled watches in the Art Nouveau and Art Deco styles, set with diamonds and sapphires and other precious gems. The Kallista series of diamond watches highlighted the late 1970s and ’80s, and the more recent Heures Creatives models celebrate all eras in retrospective designs.