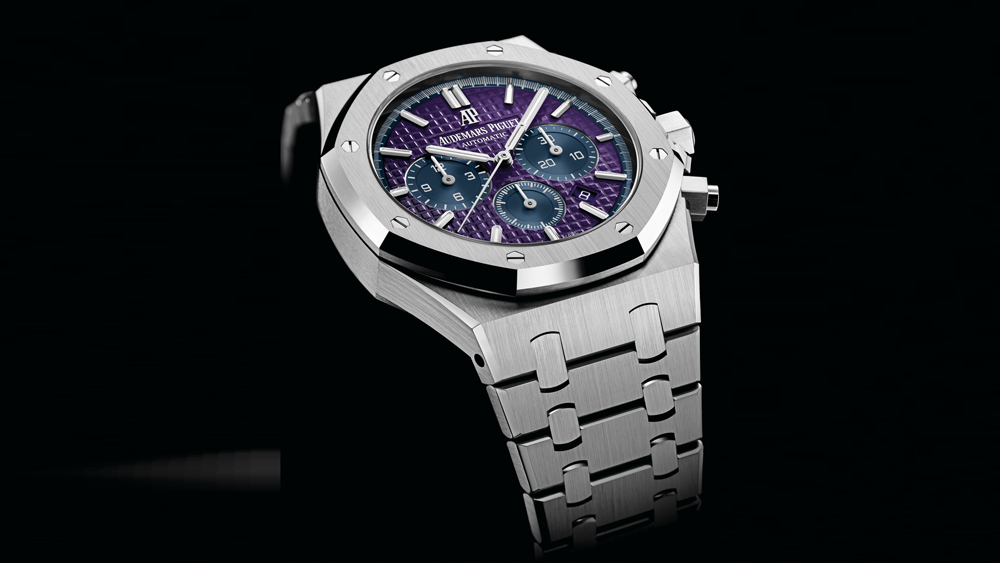 One lucky Audemars Piguet fan is in for a treat. The Swiss watch brand has created a unique piece to be auctioned live at the One Night for One Drop gala in Las Vegas on March 8—and it’s a doozy.

The 41 mm all-platinum Royal Oak Selfwinding Chronograph (reference 26331) features a striking purple “Grand Tapisserie” patterned dial and navy blue sub-dials on a platinum bracelet (an additional navy strap comes with the piece). Valued at $112,000, the timepiece joins five other exceptional items in the live auction, including a McLaren 570S Spider, a St. Tropez getaway, and a seven-night journey aboard the world’s largest privately owned residential yacht. Proceeds from the auction will benefit One Drop, an international nonprofit foundation whose mission is to provide safe access to water around the globe.

Audemars Piguet owes its decade-long partnership with One Drop to CEO François-Henry Bennahmias’s friendship with One Drop founder Guy Laliberté, the creator of Cirque du Soleil. (In 2009, Laliberté wore the brand’s Royal Oak Grand Complication during a 10-day voyage to the International Space Station.)

“When I first met Guy, who was already an AP client, we instantly connected,” Bennahmias said. “His story, his path—starting from his idea of a circus show without animals at a time when nobody could imagine this—is amazing. Hats off to his human talent.”

Ever the showman, Laliberté has organized an evening of jaw-dropping performances at the Bellagio’s “O” theater featuring the Blue Man Group as well as work by internationally renowned choreographers Andrew Winghart, Alexander Ekman, and Keone & Mari, and score composer Hans Zimmer.

This year marks the second time Audemars Piguet has offered a one-of-a-kind watch for the auction gala. In 2018, a Royal Oak Perpetual Calendar in 18-karat rose gold with a reversed dial and counter tones fetched $240,000, making it the evening’s top-performing lot.