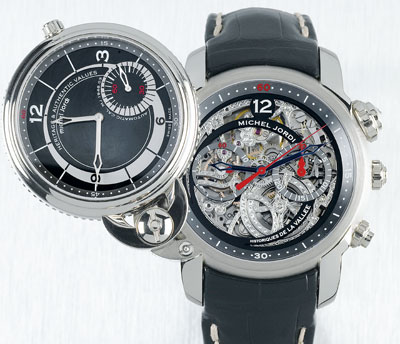 In the art world, each new movement emerges as a revolution against the existing culture: Impressionism supplanted realism, streamlined Art Deco superseded romantic Art Nouveau. Similarly, in the realm of Swiss watchmaking, avant-garde designs—which not only break form aesthetically but also claim to heighten performance—are overriding more traditional shapes and technical elements. The establishment initially dismissed this movement as a passing fad advanced by a small group of mavericks. But their influence has resonated at the traditionalist strongholds—Breguet, Patek Philippe, Girard- Perregaux, and even Vacheron Constantin.

The most striking modernist watches reveal partial or full views of the inner workings of the mechanism, recalling the centuries-old art of skeletonization. Transparent dials or apertures in dials and cases are exposing movements and lending a masculine, technical character to the timepieces, while new skeleton models maximize transparency and favor clean lines instead of mishmashes of lacy, filigreed components.

In recent years, for each watch in its Opus collection, Harry Winston has collaborated with an independent watchmaker and given him a platform to explore a new design concept. Opus’ groundbreaking, and sometimes bizarre, models have been the brainchilds of Vianney Halter, Felix Baumgartner, and other visionaries. For this year’s Opus 6, a project that was developed in only six months, watchmakers Robert Greubel and Stephen Forsey of Greubel Forsey built upon their innovative Double Tourbillon 30° mechanism, which places a standard 60-second-rotation tourbillon within a four-minute-rotation tourbillon and inclines the system at a 30-degree angle for optimal precision.

Greubel Forsey worked with Harry Winston to integrate the double tourbillon mechanism into the new Emotion 30° movement, which indicates hour, minutes, and seconds with three circular counters that eliminate the need for hands. Indeed, Opus 6 focuses all attention on its rotating double tourbillon cages by concealing the gear trains and liberating the mechanism from any visible superstructure; the bridge is screwed to the mainplate of the movement, and the case body serves as a base for the displays. “For us, it represented a chance to treat the tourbillon as a work of art,” says the 39-year-old Forsey, a tall, lanky Brit, who, along with the 46-year-old Greubel, left Renaud & Papi in 1999 to establish their own company in La Chaux-de-Fonds. “The Greubel Forsey design is more technical and traditional, but for Opus 6, the tourbillon is like a painting in the forefront, and the time display is secondary.” The duo’s latest innovation is a quadruple tourbillon movement with a spherical differential system displayed through apertures in the dial and on the side of the case.

Richard Mille, one of the pioneers of the modernist watchmaking movement, also makes his movements the center of attention. He references his passion for automotive racing in timepieces that, in a nod to the F430 and other Ferraris, have sapphire glass dials that allow you to admire the engine. More significantly, Mille partnered with specialty house Renaud & Papi to try to solve some of watchmaking’s longest-standing problems: friction’s impact on performance and fragility. He employs such unconventional materials as medical stainless steel and titanium to produce flexible bridges that enable his movements to better absorb shocks. Among other design innovations, he altered the shape of the gear wheel teeth to enhance performance by 20 percent. “I saw everyone using 21st-century machinery and technology to make 19th-century-style watches,” Mille explains. “It would be comparable to an automotive manufacturer using modern materials to build a Model T.”

From the start, Richard Mille’s case shape has been as unconventional as its technical elements, helping the relatively young, small, and independent brand further and more readily distinguish itself. Other newcomers since have employed unique designs to help them stand out from the crowd. “How do you compete with the Breguets of this world when you produce just a regular-looking watch?” asks John Simonian, U.S. distributor for Richard Mille, HD3, Urwerk, Hautlence, Greubel Forsey, and Michel Jordi. “When a customer enters Westime [Simonian’s Los Angeles store], for example, he sees 45 brands, and most will go to the recognized names. The independents have very limited resources, so design is a way for them to stand out and be noticed.”

Adventurous enthusiasts who seek the unusual rather than the tried-and-true can select from a profusion of exciting new watches from both boutique and established brands. But this genre of timepieces also can appeal to the seasoned aficionado who already has acquired a sizable collection of traditional watches and is ready to try something completely different. “It’s the same with many art collectors,” explains Mille. “You have your initiation, and then you get acquainted. The more you learn, the more you progress from classical to modern art. It takes some time to get into it—but then it’s like a leap.”