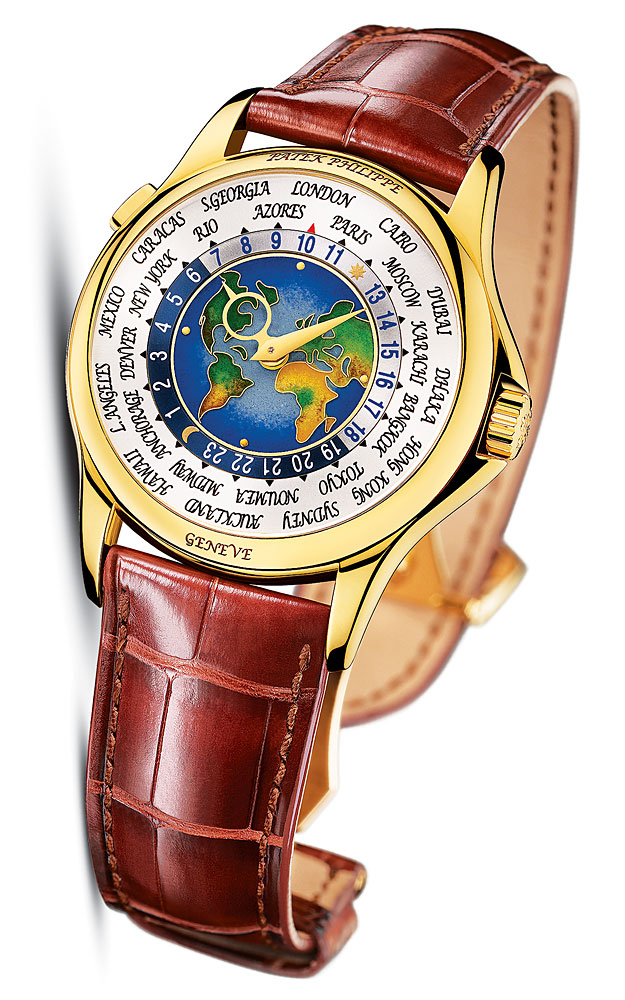 With the bang of a gavel at a 2002 Antiquorum sale in Geneva, a Patek Philippe platinum World Time watch sold for $4,026,524—the highest price paid for a vintage (pre-1990) wristwatch at auction. The model, which displays the times of 24 time zones, is distinguished by its bezel engraved with world locations. In the late 1940s, Patek Philippe started producing a small number of these watches with cloisonné dials featuring different motifs, including maps of the continents. Two such pieces from 1949 and 1953 are among the 10 most expensive vintage watches ever sold, having commanded $1,678,963 and $2,899,373, respectively.

“[Patek Philippe enamels] are some of the most desirable watches to have both at auction and in a collection,” says Aaron Rich, head of the watches department at Sotheby’s New York. “First, it’s a matter of rarity—the ones with the enamel dials are especially unusual. Also, from a purely aesthetic point of view, these are very beautiful pieces.”

Patek Philippe has resurrected the enamel-dial World Time with the new Ref. 5131, which resembles its famous ancestors that have been out of production for more than 30 years. Even though the new model is part of the standard collection, the company can only produce fewer than 100 pieces per year, because of the difficulty of making the highly complex cloisonné dials (see “The Art of Cloisonné,” page 148). According to Thierry Stern, Patek Philippe’s vice president and the son of current president Philippe Stern, two artisans—a woman and her son—make the dials: “He shapes the wire, and his mother applies the colors. It’s a family business, and they keep their secrets in the family. There is always some magic and a secret inside these watches.”

Stern points out that each dial has subtle variations in shading and other idiosyncrasies inherent to the painstaking production process. “When you buy such a piece, you know it’s unique,” he says. “If you compare them, you will see differences, so you can recognize your own watch.” One challenge was placing the Patek Philippe name without marring the enamel. In a surprising move, the traditionalist company engraved its trademark on the case rather than printing it on the dial, as it normally would.

Stern refers to the World Time facet as a “useful complication,” a term that describes a watch function that is practical in daily living. The watch displays local time, as well as the time in various locales around the world, including London, South Georgia, the Azores, and many others. Geneva watchmaker Louis Cottier devised the mechanism in the 1930s and offered it to Patek Philippe; the company patented it in 1959.

“We are more excited about the 5131 than we have been about anything in a very long time,” says Michael Manjos, CFO and “resident watch geek” at Betteridge Jewelers in Greenwich, Conn. “Anyone who knows the history and traditions of Patek Philippe realizes that this is one of their signature pieces—you can see it from across the room, and you instantly recognize it. It’s a museum-type timepiece that you can actually buy.” That is, if you are willing to wait patiently for delivery of the $53,700 watch.

Patek Philippe’s cloisonné dome table clocks are enjoying a renaissance of their own. Introduced in 1955, the solar-powered photoelectric clocks were exhibited at the 1955 World Symposium and displayed at the Museum of Science in Boston. In the early ’60s, Patek Philippe began integrating quartz technology into its clock production, and in recent years the company phased out solar versions.

Naturally, the original solar clocks have become collector’s items; they can sell for twice the price of quartz models. Last October, Sotheby’s sold a 1969 solar clock with a sailboat scene for a hammer price of $101,500, Rich reports. Working with less than a dozen craftspeople who are capable of enameling the clock’s challenging curved surfaces, Patek Philippe expects to complete about 15 to 20 clocks per year, each one unique and many of them as commissions with custom designs.

The handful of enamel artists who produce such high-quality pieces are now working at capacity, thanks to the recent resurgence of enamel timepieces. Last year the company further expanded its repertoire with limited-series enamel wristwatches depicting three themes: tigers, birds of paradise, and masks of Venice. For each theme, Patek Philippe will make four watches that blend decorative métiers d’art including cloisonné enamel, engraving under the enamel, and miniature painting.

Patek Philippe’s legacy in enamel may be little-?known to new fans of the brand. Yet Stern says his family started in the business with a dial factory that produced enamel dials. In 1932 they purchased Patek Philippe, which had been founded in 1839 by two Polish immigrants, Antoine Norbert de Patek and François Czapek. “We’ve always been involved with enameling,” says Stern, who recalls his grandfather’s collection of enamel pocket watches. His father, Philippe, inherited that passion, amassing more than 2,000 watches—enough to fill the company’s Geneva museum.

“People want something unique,” Stern says. “It’s coming back to art. People realize enameling is beautiful and very difficult to do—only a few artists in the world are capable of this quality.” One of them—?perhaps the most revered enamel artist in all of Switzerland—is Suzanne Rohr, who hand-paints pocket watches for Patek Philippe. “She makes only one piece per year, and we could sell them for any price, but we don’t, we keep them,” he says. “When she retires, then it is over. Our passion for watchmaking makes it hard to sell them.”