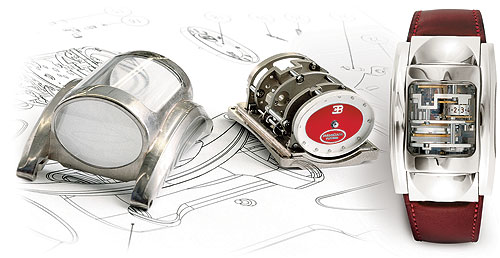 Three years ago, when Michel Parmigiani first presented his radical design for the Bugatti Type 370 watch to the Volkswagen design team responsible for relaunching the Bugatti automotive brand, his idea was met with grimaces and blank stares. At the time, the stunned engineers could not conceive that the timepiece, which Volkswagen had commissioned, would serve as a microcosm of their Veyron 16.4 project. Highly ambitious (and much-hyped) endeavors, both were to encounter unforeseen technical hurdles that would keep the finished products off the street for years to come. But after four years of development, the Bugatti Type 370 watch is finally available; the $1 million Veyron, which was rumored to have been scrapped at the end of 2003, is now scheduled to debut this fall, says Volkswagen.

Parmigiani’s design is intended to elicit gasps, which it did when the watchmaker previewed a prototype to the industry in 2002. Unlike the scads of automotive-themed timepieces pouring out of Switzerland, the $268,000 Bugatti is perhaps the only one that was engineered from the ground up—with an original movement and case. “You can see the thought that has been put into this watch,” says John Simonian of Westime in Los Angeles, one of the few dealers who carry the model, which will have a limited production of 150 pieces over the next three years. “Every detail has been considered with a totally different approach.” The watch’s perplexing layout is immediately distinguished by an oblong case that straddles the wrist with the dial at one end, positioned so that it can be read when the wearer’s hands are gripping a steering wheel, similar to the dials of the driving watches of the 1920s. Remarkably, the mechanical movement is oriented in the same unorthodox manner. While most mechanical watches compress the wheels, pinions, and other moving parts between plates only a few millimeters thick, Parmigiani has stretched the entire power train—as with an automotive engine—across the 21 mm length of the case. An elaborately curved sapphire crystal displays this engineering feat in full.

The elongated power train is one of the many automotive design elements that Parmigiani incorporated into the watch. More significantly, he included a number of systems that are unique to this timepiece. The movement rests on rubber mountings similar to those commonly used to support engine blocks; Cardan U-joints similar to those in an axle link sections of the winding stem; and a tiny differential designed like the one on an automotive drivetrain drives the power-reserve indicator. Most noticeably, the 10-day power reserve is charged with a penlike winder that executes more than 100 winding revolutions in just seconds. This innovative system is a takeoff of the external starters used for Formula One racecars.

Parmigiani’s plans proved more difficult to execute than expected, and so the watch’s production mirrored the impeded progress of its namesake auto. Even as the press pored over the prototype three years ago, Parmigiani and his watchmakers were just becoming acquainted with the scope of their endeavor. “From the start, the shape of the design imposed severe challenges for us,” he recalls, noting that when the plates are positioned so far apart, alignment becomes critical because the five plates have to remain in exactly the correct position without distortion as the watch runs. “We had to experiment with different column structures and redesign the way the watch sits on the base in order to tackle the problem.”

The differential was a particularly troublesome component. Basic differentials are common in watches, but Parmigiani’s design called for one that would operate a power-reserve indicator that rotated in the opposite direction from the other components. Miniaturizing such a device was so complicated that the first versions did not function. The solution involved using special conical gear teeth that have never before been used in watches.

The pen-shaped starter, which is designed to wind the watch rapidly, took more than three years to develop. The challenge was to create a mechanical device that would transmit the optimal amount of energy without overwinding the movement. Normally, a 10-day power reserve requires about 100 turns of a conventional crown to become charged. But with the pen starter, a series of gear reductions enables energy to be stored in the starter’s barrels with just four or five twists; when the starter is depressed into the winding socket, the energy is released. Inside the starter, a chamber filled with liquid silicone dampens power fluctuations, and a clutch disengages the starter once it meets with any resistance.

Parmigiani seems to have performed an extraordinary number of technical back flips for a watch that does little more than indicate the hours and minutes. In embracing complication for its own sake, the Bugatti Type 370 is part of a developing and somewhat controversial trend in watchmaking. Many of the most creative designers—Richard Mille and Franck Muller, among others—are expanding the conventional notion of a complicated watch to include parts that suggest automotive engines and unusual mechanisms intended to entertain as well as keep time. Some argue that such flamboyant designs overlook the practical considerations of accuracy and reliability, the traditional design impetus for the Swiss industry. Not only are such pieces anathemas to the spirit of classic watchmaking, the argument goes, they are unproven and prone to frustrating mechanical difficulties as the watches age. “I don’t pay attention to the conservatives,” says Parmigiani. “I have complete confidence in the mechanism. Making sure it worked is one of the reasons why we waited so long before releasing the watch to the public.”

While Parmigiani insists that he is no prouder of the odd transverse timepiece than he is of any of his other creations, it is clear that the Bugatti project is significant for Parmigiani the watchmaker and Parmigiani Fleurier the watch brand. In fact, the timepiece introduces a new branch of the company’s Fou du Roi (court jester) line, which will further display Parmigiani’s offbeat sensibilities. “I have many ideas that will take watchmaking in new directions,” he says. “There will be a few more surprises.”

Surprise is a natural reaction when confronted with a watch that is so revolutionary, as evidenced by those first few awkward moments with the VW engineers. But once his audience grasped the audacity of Parmigiani’s vision, a trickle of applause turned into a torrent. Parmigiani hopes watch lovers will be equally impressed.