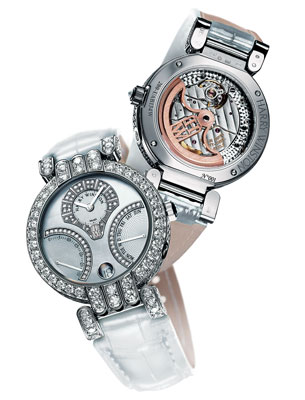 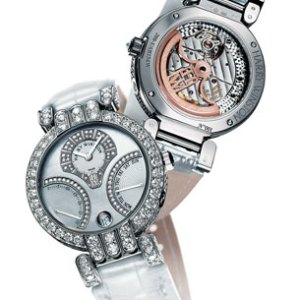 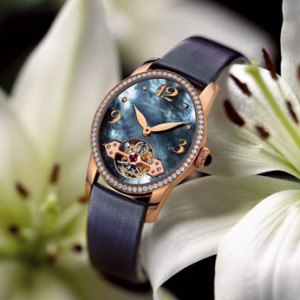 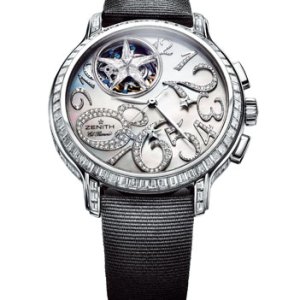 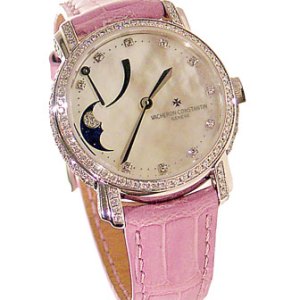 They say it’s a man’s world, but lately one wonders. After breaking through corporate glass ceilings, a small but determined contingent of women have seized upon the objects of our connoisseurship, the last bastions of male exclusivity. For years now, they have been puffing away at fine cigars, sipping single-malt scotch, cellaring cases of grand cru Bordeaux, and tooling around in growling sports cars. Not content to be merely ladies who lunch, they have developed a taste for our indulgences, and so it was only a matter of time before they assumed the historically male-only mantle of mechanical watch aficionados.

The Swiss watch industry has been slow to recognize women’s ability to appreciate the most exclusive watchmaking achievements. Since the beginning of the quartz movement nearly 35 years ago, watch designers, industry executives, and retailers have operated under the assumption that women want only quartz. But when quartz was first introduced, men exhibited a similar preference, until they became reacquainted with the artistry and craftsmanship of fine mechanical watchmaking. Now, women may be reaching the same realization that a mechanical movement represents a high-quality watch’s inner beauty.

While the watch industry has been making simple mechanical timepieces for women, it is hesitant to produce high-complication pieces, because, the cognoscenti contend, women still rarely purchase mechanical watches that are more complicated than a chronograph. “When a woman buys a complicated watch, it is almost always spurred by her husband who is a fervent collector and wants his wife to wear something of appropriate quality,” says Leon Adams, president of New York City watch retailer Cellini. “At least in this store, I hardly ever see a woman make a purchase like this for herself. I don’t think women really like to wind their watches.”

Brenda Emery is one woman who does. A corporate attorney in Florida, Emery, like many of her female watch-enthusiast peers, received her introduction to Swiss watches from her husband, a self-proclaimed fanatic. “One year we went to the Audemars Piguet factory in the Vallée de Joux,” she recalls, “and I immediately wondered: Why do women have to wear quartz?” The exposure to the history and meticulous production processes on display at Audemars Piguet’s facility in Le Brassus stirred her interest in the mechanical artistry that is fully demonstrated only in men’s watches. As she learned more about watchmaking, her knowledge piqued her appetite for more savory fare. “Personally, I think the more complicated a watch is, the better, because you have a greater appreciation for the amazing work that goes into them,” she explains. “If I had my druthers, I’d have a tourbillon, although I’d probably never stop looking at it.” Emery is not alone in her preference for more intricate complications. “We had 60 collectors at our last event, and 12 of them were women,” says Richard Horne, president of Shreve & Co. in San Francisco. “They are just as fascinated by the more advanced models that come from the Swiss companies.”

Watch companies, especially those with rich mechanical heritages, are taking notice of this interest, but they are responding deliberately. Patek Philippe, with its reputation for quality and purity, for years offered only basic mechanical movements for women. “Quartz continues to be the most practical alternative for women,” says Hank Edelman, president of Patek Philippe USA. “But certainly there’s been a tremendous increase in the number of women who have gained an awareness of and appreciation for fine-quality mechanical watches. And once that comes across, certainly the next step is a watch with some kind of complication.”

Patek Philippe quietly ventured into producing complicated women’s watches in the late 1990s with a ladies’ version of its Travel Time (ref. 4864) watch, and two years ago it released a mechanical moon phase (ref. 4858) designed expressly for women. This year, the company has feminized its patented annual calendar mechanism—a basic complication that has been very popular among men. The reference 4936 uses the same 37 mm case and base movement as the men’s 5035 (introduced in 1996), but also incorporates a mother-of-pearl dial, as well as a diamond-set crown and bezel that add a feminine flair and offset the model’s technical appearance.

Patek Philippe’s measured steps reflect how slowly the Swiss watch establishment evolves. But other companies that are not restrained by the same sense of classicism have made more dramatic strides. Among these is Harry Winston, a company known for its high-jewelry roots and horological pyrotechnics. Its new ladies’ Excenter Biretro embodies both of these qualities, with retrograde seconds and day-of-the-week displays housed in a delicate 34 mm case set with 278 diamonds.Retrogrades—which indicate time units in a linear fashion with a hand that travels laterally and then snaps back to its starting point—have become popular among enthusiasts who enjoy seeing a little action on their dials. Harry Winston’s version is easily readable—the conventional hours and minutes display is located at 12 o’clock—and balanced with retrograde indicators on each side of the dial. “Most watch companies put too much testosterone into their complications,” says Max Busser, head of development at Harry Winston Rare Timepieces. “Most of these companies don’t understand what women really want. You can’t just plunk diamonds on the case and call it a ladies’ complication.”

Busser’s viewpoint is influenced in part by what he has seen and heard in the Far Eastern and Russian markets, where, he says, demand for women’s high complications has grown ahead of that in the West. There, he says, women prefer complicated mechanical watches because they represent a better long-term value; however, the beauty of the watch remains paramount. “In Asia, a lot more women are interested in tourbillons,” he says. “Price really isn’t an issue with a woman who sees a watch she likes, even a complication. If it suits her, she’ll buy it.”

Such feminine proclivities are the driving force behind Zenith’s Starissime Tourbillon, the most flamboyant of this year’s complicated watch creations for women. Elaborately festooned with diamonds, Starissime synthesizes conventional complicated watchmaking aesthetics with the much freer and more fashionable lines of high-jewelry watches. The Starissime Tourbillon, with its diamond stars that spin to emulate the rotation of the tourbillon cage, is a radical departure from conventional complications, but one with reason behind its fantastical appearance.

“I think women will reinterpret complications,” says Zenith president and chief designer Thierry Nataf, who is determined to recast the brand’s highly technical image in a fashionable light to make it more palatable to women. “The tourbillon in this watch is really not a technical feature. I don’t think women view it as a method of improving accuracy; they are attracted by its ability to escape gravity. Complications [should evoke] an emotion for them, like poetry, and for a high complication, like a minute repeater or a tourbillon, I would create a watch with a different story than I would for a man.”

Delaneau’s creative director, Cristina Thévenaz, was among the first to recognize the tourbillon’s inherent feminine appeal. “We don’t care about how many seconds we can hold our breath—a chronograph is not a feminine thing,” Thévenaz explains, drawing a contrast with a moon phase, which women naturally connect with, and a power reserve, which is as sensible as an automotive gas gauge. “A complication can be beautiful, but a woman has to be comfortable using it.”

Women jewelers, in particular, possess a distinct advantage in enlightening their female customers about the male-dominated world of complicated Swiss watches. “About two years ago, a number of my clients noticed how much fun I was having wearing a Girard-Perregaux tourbillon,” recalls Robin Levinson, who, with her husband, Mark, owns and manages Levinson Jewelers in Plantation, Fla. “Now they know all about complicated watches and are buying perpetuals from Franck Muller and some of the interesting pieces from Jaeger-LeCoultre.”

As Women like Levinson and Brenda Emery share their enthusiasm for complicated timepieces, more women, having gained a greater appreciation of what’s under the dial, may choose to wind their timepieces. “Many of my girlfriends have no idea what goes into these watches,” says Emery. “Their first reaction is: ‘You mean it’s like a Rolex?’ But after I tell them the details about the level of work that goes into a piece, at least the smarter ones are intrigued.”