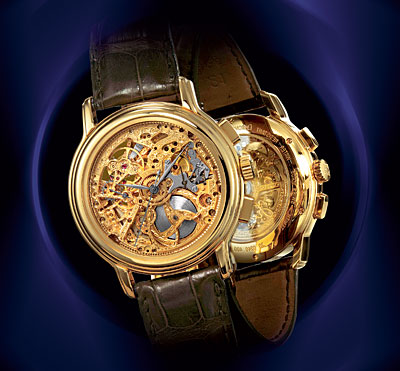 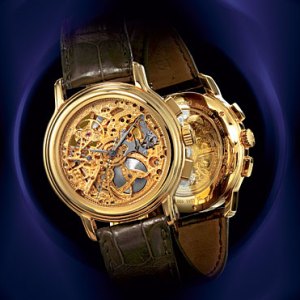 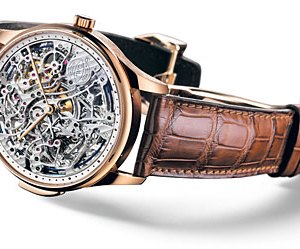 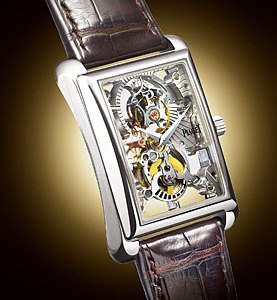 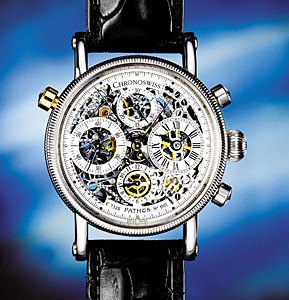 The skeleton watch is a prime example of how fine Swiss mechanical watchmaking is driven more by an appreciation for art and craftsmanship than a practical need to tell the time. These timepieces embody the most extreme exercise in horological aesthetics: movement finishing and decoration. In fact, skeletons celebrate this discipline to such a degree that it is virtually impossible to read the time through the visible movement’s spaghetti of engraved and filigreed cocks, bridges, and wheels.

Skeletonizing a watch involves the removal of extraneous material from the supporting plates of the movement to provide a glimpse of the movement’s inner workings. To heighten the visual effect, the remaining visible elements are decorated with intricate engraving and then hand-polished. It is an old technique and a rare one; engraving of movements has been a watchmaking discipline since the 17th century, but modern skeletons incorporate finishing techniques that were developed in the 19th century, as evidenced by examples of skeletonized pocket watches from that period.

Although a number of companies produce these pieces, none of the major brands claims skeletonizing as a specialité de la maison. The amount of skilled labor necessary to produce a single piece and the limited demand for them—typically, only experienced collectors show an interest in skeletons—make production of these timepieces a challenging proposition.

“Every skeleton watch, whether high complication or simple automatic, is like a snowflake,” says Scott Rosen, president of Vacheron Constantin North America. “No two are the same.”

Vacheron Constantin is considered a premier skeleton producer, renowned particularly for applying the design to the tourbillon and minute repeater complications. However, delivering even minimal quantities of these pieces imposes such a strain on the company’s resources that only emphatic remonstrations from collectors have persuaded Vacheron to continue producing them. In fact, the brand stopped making skeletons for two years until dealer requests led it to reintroduce a simple automatic skeleton Malte series in 2003. Annual production is limited to about 50 pieces, and only three were delivered to the United States this year.

The refined skills required to produce a skeleton watch, as well as the discipline’s pedigree, are comparable to those associated with prestigious complications. Yet the genre, which is most popular in Asia, remains relatively underappreciated because of its purely aesthetic nature, while newly developed mechanisms and functions garner most of the attention from collectors. “There aren’t really any collectors of skeletons exclusively,” explains John Simonian, president of Westime in Los Angeles. “Rather, these are pieces people buy because they don’t have anything like them in their collections.”

As the upper echelon of mechanical watchmaking draws admiration and appreciation from a broader audience, demand is increasing for watches that not only sport more complications, but also appear more complicated. In response, established brands are producing an unprecedented number of complicated skeletons. International Watch Co. (IWC) of Schaffhausen, Switzerland, recently introduced a new skeleton minute repeater that, with its star wheels and abundant levers, follows this current. “IWC’s Portuguese Minute Repeater Squelette marks the first time a minute repeater has been made visible in such a comprehensive fashion, allowing the wearer to see the entire inner workings of the watch and all its 250-plus parts,” says Eveline Jones, president of IWC North America, who notes that the piece is powered by the caliber 95911, a pocket watch movement first used by IWC in the 1930s. The minute repeater movement is an excellent canvas for skeletonization because of the on-demand action of the hammers striking the gongs. As a skeleton, the usually subtle and traditional minute repeater is transformed into a watch that is visually, as well as audibly, compelling.

While the purpose of skeletonization is decorative, the process imposes a number of technical demands on the watchmaker. To ensure a clean fit and efficient operation, the movement must be assembled entirely before any decorative work begins. Then it must be disassembled completely so that the skeletonization can be performed component by component. The heart of the process is the removal of unnecessary materials in a manner that maintains the structural integrity of the parts. The designer can artfully transform a plate or a bridge into latticework with multiple apertures, but he must avoid warping the piece or creating too much flexibility, which can cause the movement to fail over time. The watchmaker then polishes and engraves the surfaces before the entire watch is reassembled. Thus a complicated skeleton watch such as the new Emperador tourbillon from Piaget requires a much greater investment of time and labor than the same conventional tourbillon model introduced last year.

Working with the base plate of the movement, which gives the device the structural support it needs to function properly, poses a particularly daunting challenge to the watchmaker. The base plate is on the dial side of a wristwatch, and therefore much of it must be cut away to expose the rest of the movement. The designers of certain skeletonized chronographs, such as the Pathos from Chronoswiss and the Julius Assmann 3 from Glashütte Original, have skirted the problem by making the chronograph subdials structurally significant. One of the most intriguing skeletons to debut this year, the Tank Louis Cartier Skeleton, retains its rigidity because only the base plate has been skeletonized. This new design, which eschews traditional engraving and filigreeing, exhibits contemporary flair with an Art Deco influence. Nevertheless, an enormous amount of work is required to finish all the edges and surfaces. The extensive labor naturally limits the supply—Cartier estimates that only four will make their way to the United States.

Skeletonizing, like most watchmaking methods, is not the handicraft it once was; most companies execute their designs with the help of a computer-controlled precision cutting machine called a spark eroder. This tool commonly is used to manufacture parts that are too small for milling. Spark erosion, which cuts metal patterns with a fine wire charged with high-voltage electricity, is far more expeditious than hand-drilling and -sawing, but the purist might prefer a skeleton watch that has been built the old-fashioned way.

It is still possible to obtain such a piece—from Kurt Schaffo, perhaps the only independent watchmaker in Switzerland who specializes in skeletons. Using old tools and techniques, he completes 30 to 40 pieces a year with the help of his son, Christophe, a master engraver. Schaffo’s talent also has been showcased in some recent, very limited-editions from Zenith and Corum.

But securing a Kurt Schaffo timepiece requires patience and diligence; he has no U.S. distributor and speaks little English. Acquiring a skeleton piece from one of the major brands can be equally difficult because of the limited quantities. Breguet produces perhaps the largest selection of complicated skeletons, which it sells predominantly through its Manhattan flagship store. The newly released models from IWC and Piaget may have a slightly wider distribution, but they are expected to sell out quickly. The Opus and Pathos models from Chronoswiss are less pricey alternatives that should be easier to find, but the same will not be said for the skeleton tourbillon the company plans to release next year.

Those persistent enough to acquire a fine skeleton piece can admire the art and complexity of a fine mechanical movement, while knowing they wear one of the most recognized badges of horological connoisseurship—even if they have no idea what time it is.