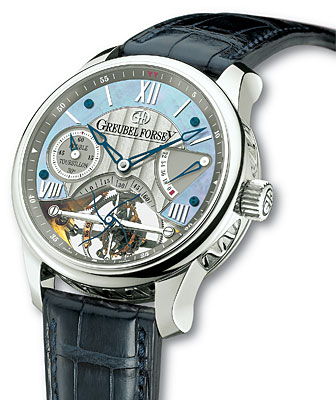 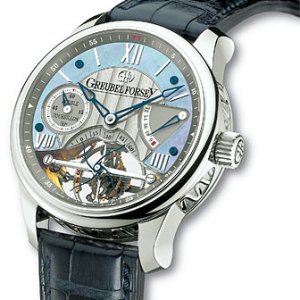 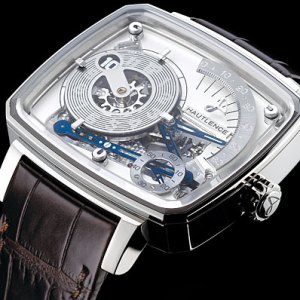 Despite his self-assured demeanor, Max Büsser, one of Switzerland’s young watch entrepreneurs, has reason to worry. This became evident last summer, when Büsser was constructing his first Maximilian Büsser & Friends timepiece. A hiccup in the supply of critical movement components forced him to postpone the debut of the HM (Horological Machine) No. 1 by three months. Last winter, Büsser started delivering his first watches, which are distinguished by a double-lobed case, central tourbillon, and scimitar-shaped rotor. Such obstacles are routine for small companies that rely on the network of Swiss watch component suppliers, as the 39-year-old Büsser is well aware.

Before resigning last year to form his own venture, Büsser spent seven years managing Harry Winston Rare Timepieces and overseeing its extravagantly complicated Opus collection. During his tenure at Harry Winston, Büsser formed partnerships with F.P. Journe, Felix Baumgartner, and other independent watchmakers, and he regularly collaborated with Swiss specialists to augment the brand’s manufacturing capabilities. For Maximilian Büsser & Friends, he has a similar plan that involves enlisting the industry’s many unaffiliated watchmakers and craftsmen to create timepieces that exhibit wildly unorthodox technical and aesthetic features.

Büsser’s supply difficulties are symptomatic of his approach, but as a newcomer producing limited quantities, his options are limited. His company and others cannot afford industrial equipment, such as milling machines, and their small orders often receive low priority at component suppliers, which frequently operate at capacity to meet the demands of the dominant brands. If you purchase one of these complex, sometimes experimental, timepieces, you likely will experience a long wait for delivery, and encounter further uncertainty when the watch needs regular service or repairs.

While some devotees of unconventional timepieces may downplay such drawbacks, even those obsessed with novelty care about a watch’s enduring value and serviceability—areas in which the established brands enjoy considerable advantages. The watch companies that have emerged since the turn of the 21st century realize that closing this gap is a matter of survival, and contrary to their images as freewheeling renegades, many are working to build functional, stable infrastructures. Urwerk, Blu, and Hautlence—all known for eccentric design—are among those making significant investments in new equipment, personnel, and facilities.

“True independence is the ability to refuse inferior work from suppliers,” says Jérôme de Witt, who, though not a watchmaker himself, established DeWitt in 2003 with the goal of one day producing his own movements. “I have invested a great deal of my own money in milling equipment and a new building to make sure we can build watches in the future according to our plans rather than what is dictated by suppliers,” he says. Unlike most rising watch entrepreneurs, de Witt can tap his sizable personal fortune to attract top executive and watchmaking talents, including Claude-Daniel Proellochs, former CEO of Vacheron Constantin, and Jean-Paul Duarte, one of Patek Philippe’s most skilled engineers. The new manufacturing facility in Vernier, near Geneva, will allow the company to develop and produce more of its own movements rather than relying on specialty houses, which, in the past, had shared DeWitt’s designs with other brands.

In contrast to de Witt, Büsser represents the undercapitalized watch entrepreneur. This year, he will complete his first collection of 100 pieces—with the help of watchmaker Peter Speake-Marin and engineer Laurent Besse—at his own expense. Büsser intends to fund his next design, due in three years, and whatever capital investments he can afford, with the proceeds from the sale of his current $149,000 model. His plan only amplifies the risks of relying on component suppliers. “If I have a more serious supply interruption or a significant technical problem, I am bankrupt,” Büsser admits. But he also hopes to leverage his many personal relationships in the watchmaking and component manufacturing community to reduce his vulnerability. He is confident that, with help from his friends and acquaintances in the industry, he can improve the delivery and quality of his components.

Even with the relatively high profit margins of the watch business, years might pass before a small company such as Büsser’s is able to fund significant expansion. A company can turn to outside investors, and with the watch industry enjoying a period of record growth, many venture capitalists are eager to support watch companies. In fact, some owe their very existence to such financing.Hautlence’s Renaud de Retz and Guillaume Tetu toyed for years with idiosyncratic movement designs that use connecting rods to transmit power, but the duo lacked the finances to place initial orders with suppliers. In 2004, a French private equity firm provided the necessary capital in exchange for a majority stake in the newly established company. “We naturally have to discuss our plans with our investors,” says de Retz, “but their backing has allowed us to add an engineer for movement development and stock a large inventory of components so we can reliably deliver finished pieces.” De Retz wishes that he could have retained a larger stake in the company, which completed its first movement in 2005 after enduring a year of technical nightmares. His investors succored the brand through that period, when it otherwise would have perished.

But independent watchmakers, many of whom have fled the confinement of large brands, are wary of the oversight—in some situations, the interference—that can accompany investment from private sources or major holding companies. Robert Greubel and Stephen Forsey, a team of complication specialists in the Vallée de Joux, recently sold a 20 percent share of their company, Greubel Forsey, to the Richemont Group—owner of Cartier, Jaeger-LeCoultre, A. Lange & Söhne, and other major brands. Richemont guaranteed the duo’s autonomy in creating their inclined, multiaxis tourbillons, but in addition to a share of profits, the conglomerate also has gained access to the pair’s technical expertise, which they continue to provide on a contract basis to other companies.

Like most of their watchmaking peers, Greubel and Forsey have short-term plans to increase their staff and expand their production facility, and long-term plans to address service issues, which are critical to a brand’s longevity. Mechanical watches usually require servicing every three to five years to keep them in prime condition, but many of these independent companies have not been around that long. Even watches made by established brands can spend months in Switzerland to complete routine servicing. Therefore, a beginning brand’s relative lack of resources and experience in the service realm should be a consideration when purchasing one of these groundbreaking models.

To address the issues of service and personnel, Greubel and Forsey joined with other independent visionaries—including Philippe Dufour, Vianney Halter, and Kari Voutilainen—to form the Time Aeon alliance. The new organization intends to share technical information and procedures so that the various member firms can service each other’s watches. The future of these companies is inextricably tied to their namesake owners, who either make the watches or oversee their production. A larger umbrella organization such as the alliance can help assure buyers that these watches will be supported even if the watchmaker who created them is no longer active.

The members of the Time Aeon alliance also recognize the need to pass along their specialized knowledge, which is proving difficult even though, as the industry continues to grow, watchmaking schools are turning out increasing numbers of graduates. “Watch schools today are geared to produce what the industry is demanding: industrial watchmakers,” remarks Forsey. “We need people with broad skills, and one of the most important parts of the alliance will be a program to apprentice young watchmakers so they learn our traditional techniques.”

With their captivating and audacious inventions, these rebellious, young independent watchmakers only underscore the corporate and conservative nature of the established marques. But as they mature, they are realizing that the less glamorous exigencies of production can pose a challenge more formidable than developing the breakaway mechanisms that launched them into business. As Büsser observes while contemplating his own tidy industrial base, “It is pointless to use the best watchmaking talent in the industry if you can’t get the components made.”