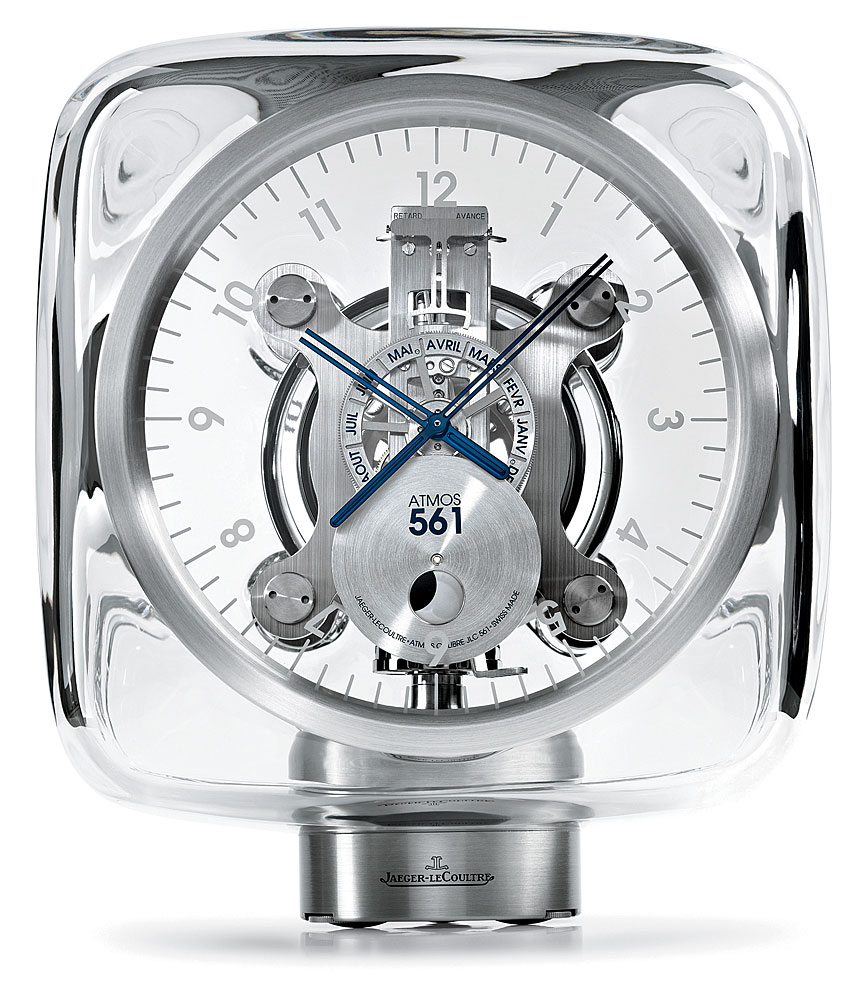 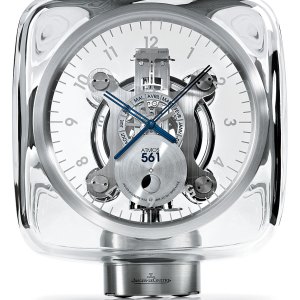 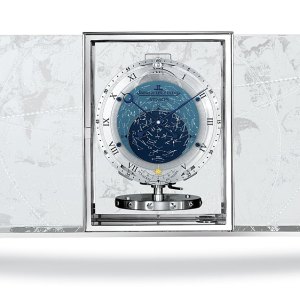 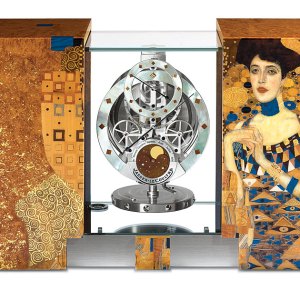 Throughout his life, Swiss engineer Jean-Léon Reutter was fascinated by the idea of a clock that could keep time for centuries without a winding mechanism or an external power source. In 1928, upon testing the first prototype of his visionary perpetual clock, Reutter—who was a graduate of the Swiss Federal Institute of Technology Zurich—determined that the mechanism was not well suited for mass production. Consequently, he made only a small number with that design.

In 1932, however, he met Jacques-David LeCoultre of the Swiss watchmaking company LeCoultre & Cie (which merged with Edmond Jaeger to form Jaeger-LeCoultre in 1937). LeCoultre, who was taken with the concept of an eternal clock, acquired Reutter’s patent in 1935. He subsequently devoted his company’s technical resources to optimizing Reutter’s design and overcoming the manufacturing challenges that plagued the timepiece. His efforts quickly bore fruit. Since 1936, more than 750,000 Atmos clocks have been made, and they seemingly run on air (see “How Does an Atmos Clock Work?” page 226).

With the atmos anniversary models, Jaeger-LeCoultre sought to make extravagant objets d’art rather than mere clocks. In Atmos clocks, the movement attaches to the base of the timepiece; however, in each of the new designs, the movement is fixed to the back glass panels, so that it seems to float in the center of the case.

This effect is particularly beguiling in the model designed by Newson, a 44-year-old Australian who has applied his contemporary vision to watches, furniture, rocket ships, and more. Newson wanted to encase the clock in crystal, like a ship in a bottle, says Janek Deleskiewicz, Jaeger-LeCoultre’s artistic director, who met Newson in Paris a few years ago to discuss a collaboration. “We decided to make an Atmos in his style that would also represent Jaeger-LeCoultre’s heritage in handcrafted watchmaking. The result is a very new and modern Atmos clock in terms of style and technical realizations,” says Deleskiewicz. “We never want to be in the past looking to the old; we need to, and love to, observe art expressions of the new generation.”

The design posed some technical challenges. Every dimension of the handmade crystal bubble must be precise and consistent from piece to piece for the clock to function. And movement makers were required to redesign an existing mechanism to create the new Caliber 561, so that it would fit into the specially made Baccarat crystal case. The clock’s hands indicate hours and minutes on a transparent dial, while rotating disks display the month in the center and the phases of the moon at 6 o’clock. Jaeger-LeCoultre will make only 888 of the Atmos 561 by Marc Newson, with each signed by the artist and priced at $20,500.

For the second special-edition clock, Jaeger-LeCoultre turned to marquetry artist Jérome Boutteçon, who in 2000 crafted the first Atmos Marqueterie (inspired by artist Alphonse Mucha’s The Seasons). A French native, Boutteçon has been practicing his art in Sainte-Croix, Switzerland, for 18 years. For their muse, Boutteçon and Jaeger-LeCoultre chose Gustav Klimt’s 1907 painting Portrait of Adele Bloch-Bauer I, which has been called the Mona Lisa of Austria. Ronald Lauder purchased the work in 2006 for a record $135 million. “You immediately recognize the work of Klimt, much like Picasso,” says Deleskiewicz, who notes that it took about one year to create the image in the clock from more than 1,200 pieces of wood. Production of the new Atmos Marqueterie is limited to 10 pieces, which are priced at $195,000 each.

“What I like to do in marquetry is make the image as realistic as possible, almost like a painting,” says Boutteçon, who makes a detailed sketch of his design in pencil before preparing the tiny slivers of wood that he pieces together to form the picture. The exotic woods that make up his palette include Andean boxwood, East Indian satinwood, lemon wood, madrone burr, and, the most precious of all, yellow amboyna burr.

Jaeger-LeCoultre designed the dial to match the warm wood tones of the case, which is also inlaid with rose- and yellow-gold leaf. A cushion-cut yellow sapphire marks the 12 o’clock hour, and petrified wood marks the other hours. For this clock, the company chose an Atmos Régulateur movement that displays months and moon phases in addition to hours and minutes. To protect the clockworks from damaging vibrations, Jaeger-LeCoultre devised a mechanical spring-closure system for the cabinet, which opens smoothly when you push a button to reveal the glass case that houses the clock.

“The last piece was made to illustrate the time link with the planets,” explains Deleskiewicz, describing the Atmos Astronomique, the most technically complicated of Jaeger-LeCoultre’s three models. “Like the rotation of the earth, Atmos is an expression of perpetual movement.”

Therefore, an equation of time and celestial map were the most natural choices for the complications. Jaeger-LeCoultre had never built an Atmos with an equation of time, a function that indicates the difference between true solar time (as read on a sundial) and civil time (as indicated by a clock). The discrepancy varies from plus 14 minutes in mid-February to minus 16 minutes on November 3, due to the tilt of the earth’s rotational axis and the elliptical shape of its orbit. (The times match on four dates per year: April 15, June 13, September 1, and December 25.)

“The Atmos does not provide much energy, so we were challenged by adding another complication,” explains René Lamotte, director of the Atmos workshop at Jaeger-LeCoultre’s headquarters in Le Sentier, Switzerland. “The [R&D] department tweaked the movement to reduce any loss of energy or friction.” The result of their efforts is the Caliber 566, which drives not only the equation of time and a month indicator, but also a rotating disk that presents a current view of the ever-changing constellations in the night sky above the Northern Hemisphere.

The $82,200 Atmos Astronomique, which Jaeger-LeCoultre will limit to 48 pieces, features a design based on the 1934 CH1, a clock with glass panels on each side. The two panels on the Astronomique are etched with fragments of sky maps from Harmonia Macrocosmica, a 1660 cosmographic atlas published by mathematician and cartographer Andreas Cellarius. This celestial theme inspired Jaeger-LeCoultre to devise the new movement to reflect the imagery, as well as the universal and perpetual aspect of time as represented by Atmos. “The original creation was the most complicated part, because it was difficult to realize the perpetual movement,” says Lamotte, who relishes adding complications to what appears to be a rather simple clock that runs on air. “Now we can connect it with different mechanisms, such as the celestial complications, and we have a new project that is even more difficult. This is an evolution that has been made over the course of a century.”

How Does an Atmos Clock Work?

Jean-Léon Reutter’s original plan for powering a perpetual clock was to derive energy from changes in atmospheric pressure, explains Jaeger-LeCoultre’s René Lamotte. However, early technical difficulties instead led the company’s engineers to harness the energy released when changes in temperature cause mercury and ammonia to expand and contract. In the mid-1930s, Jaeger-LeCoultre switched to ethyl chloride gas enclosed in an airtight bellows capsule. Despite slight alterations to the movement over the decades, the operating design remains the same to this day. As the temperature rises and falls, the volume of gas—and consequently the bellows—expands and contracts, causing the system to “breathe” and thus wind a spring in the spring barrel. The spring oscillates only twice per minute; the spring of a wristwatch oscillates an average of 300 times per minute, using 250 times more energy than an Atmos clock. “We just need a one-degree temperature change for the Atmos to function,” says Lamotte, who has worked on Atmos clocks for nine of his 17 years at Jaeger-LeCoultre. “That one-degree change will power the clock for two days.” The mechanism requires so little power that 60 million Atmos clocks would be required to light a single 15-watt incandescent bulb.