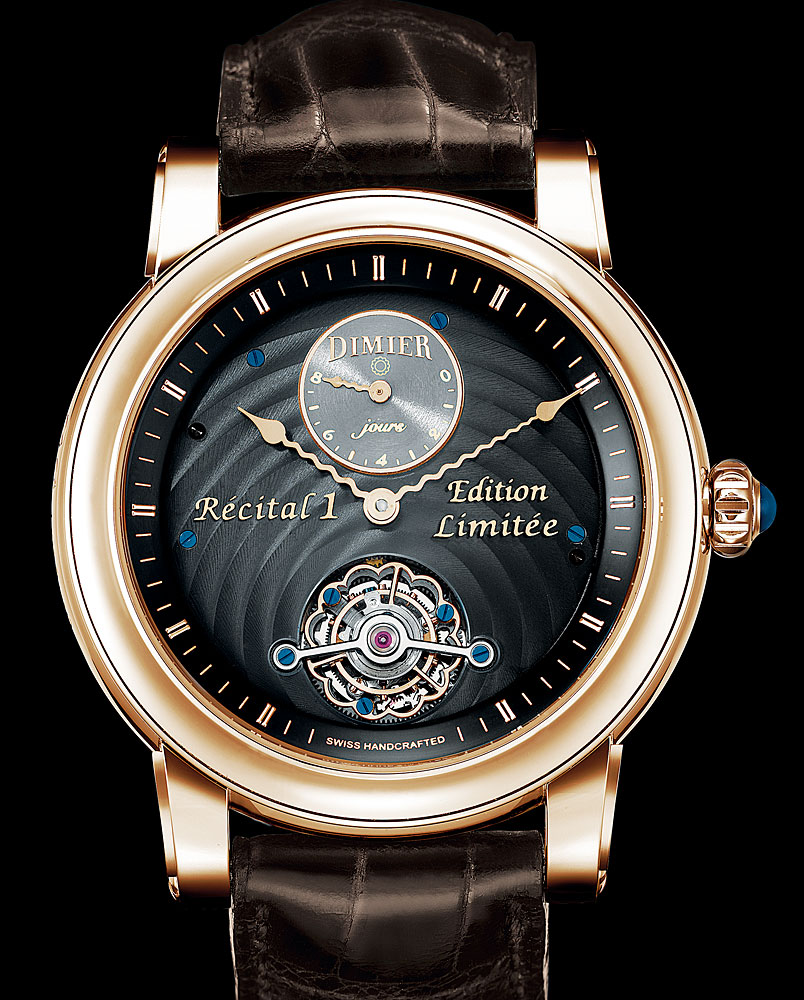 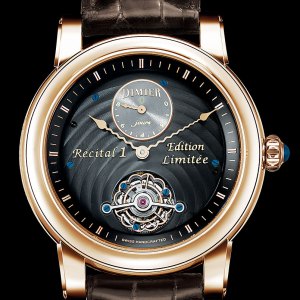 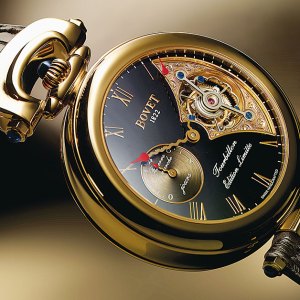 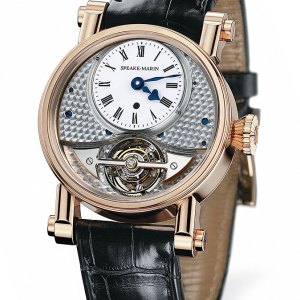 Swiss watches served as a kind of appetizer during Pascal Raffy’s childhood in Lebanon. Before the family’s Sunday dinners, Raffy’s grandfather would show off pieces from his collection to Raffy and his cousins, teaching them about complications and marks of high quality and how to assess rarity.

Raffy, who is now in his early 40s, recalled those lessons years later when he began building his own collection. One pet piece, a 1980s-era Breguet minute repeater, exemplifies everything he values as a collector, he says. The watch’s melodic, full sound is a testament to its superior-quality movement, and because Breguet was making only a few thousand watches annually during this period, owning the piece made Raffy, as he puts it, “a member of a very exclusive club.”

Raffy’s greatest coup as a watch collector, however, was not the acquisition of any specific piece, but of an entire brand. In 2001, he became majority shareholder and CEO of Bovet Fleurier. Since taking over Bovet, Raffy, a former pharmaceutical executive, has been intent on making the brand’s watches worthy of his and his grandfather’s collections. He has introduced many changes to the formerly moribund brand, the most significant of which was his 2006 purchase of Swiss Time Technology (STT), an independent tourbillon movement supplier that he is converting, at great expense, into an in-house movement manufacture for Bovet.

Raffy is one of several entrepreneurs who have acquired and are resurrecting obscure historical brands, including Jaquet Droz and A. Lange & Söhne. But rather than rapidly expand production, as most brands now are doing, Raffy, acting upon his watch-collector sensibilities, has reduced output and increased the amount of time that is devoted to each piece.

When Raffy assumed ownership of Bovet, it had lost some of the esteem that it earned during the 19th century, when it made elaborately decorated pocket watches primarily for the Chinese market. The brand was lying dormant from the 1950s to 1994, when entrepreneurs Roger Guye and Thierry Oulevay revived it. Their wristwatches included a peculiar bow and crown at 12 o’clock, reminiscent of Bovet’s original pocket watches. Just as Bovet did during its 19th-century heyday, under Guye and Oulevay’s direction, the company enlisted independent artisans to decorate the watches with engraving, jeweling, enameling, and miniature painting. As in the past, Bovet did not produce its own movements and instead relied upon supplied, standard movements, which it modified and decorated. As a collector, Raffy regarded this practice as inconsistent with genuine prestige.

In 2004, as a partial remedy, Raffy acquired a share in component maker Aubert Complications, and he contracted the production of some complicated movements to Christophe Claret, who specializes in minute repeaters and tourbillons. These additions elevated Bovet’s status, but the brand still fell short of Raffy’s goal of transforming it into an authentic complicated watch manufacture.

In mid-2005, Raffy established a partnership with STT to supply Bovet with tourbillon movements. The collaboration still did not satisfy Raffy’s lofty aspirations, and furthermore, some industry insiders long had questioned whether STT’s movements were of sufficient quality for high-level pieces (see “Devilish Details,” page 166).

Such debate has shadowed STT since a group of movement engineers, including former Swatch Group employees Peter Gschwind and Moritz Züllig, established the company, initially as Progress Watch, in 1999. Its goal was to chip away at Swatch’s near monopoly in supplied movements and components. Progress Watch built not only movements, but also hairsprings—critical components of mechanical watches that, at the time, only Swatch Group produced. At its facility in Tramelan, located in Switzerland’s mid-Jura region, Progress Watch also began manufacturing a low-cost, hand-wound tourbillon movement that the watchmaking establishment derided because it looked clunky and was designed for inexpensive and quick production. By the fall of 2003, financial setbacks forced Progress Watch to sell its Tramelan factory, along with its proprietary tourbillon movement design, to Robert Jansen, a Dutch investor. Jansen revised many of the crudely designed parts and began selling movements under the name STT to Alain Silberstein, Chronoswiss, Perrelet, Harry Winston, and Bovet.

Despite its noteworthy client list and its low-cost/high-volume production methods, STT was unable to generate sustained profits, even in a booming tourbillon market. In June 2006, with STT struggling financially, Raffy bought the company, acquiring its facilities, designs, and personnel. At the same time, Raffy also purchased the Spir-It hairspring company.

Raffy revamped and renamed STT, calling it Dimier 1738—Dimier after a family that produced watches for export in 19th-century Fleurier, which was Bovet’s original home, and 1738 in reference to the birthdays of Raffy’s children. “From my days as a watch collector, I was convinced that real luxury was something made by hand in small quantities,” he explains. “When the companies whose watches I collected began increasing their quantities, I was no longer interested. [High-volume production], unfortunately, was also the strategy at STT, and the first thing I did was get rid of the management that believed in making watches this way.”

After making the personnel changes, Raffy drastically cut production, from nearly 1,500 movements per year to just over 600, and he retained only Harry Winston as a long-term client. He also upgraded the manufacturing equipment and recruited additional staff. More important, he initiated a total redesign of STT’s tourbillon movement to improve its performance and reliability.

Raffy’s strategy of tapering output and devoting more time to finishing each piece runs contrary to much of the rest of the watch industry, where demand outstrips capacity, and overproduction and insufficient attention to quality are prevailing issues. “Suppliers across the board have been cutting corners trying to increase output,” says boutique watch manufacturer Max Busser, who has worked with STT as an independent client with his new company, Max Busser & Friends. He also dealt with STT in his former capacity as chief of development at Harry Winston Rare Timepieces. “Eventually, these parts and pieces come back with problems to be fixed, which slows the entire manufacturing process down,” says Busser. “It takes about 60 percent more effort to extract the proper quality from suppliers today.”

Raffy’s reforms at Dimier resolved the technical problems. To flaunt the company’s advances, Raffy introduced a small sister brand to Bovet, under the Dimier name. Its initial model, called Récital 1, features the updated tourbillon movement housed in an oversize, 46 mm case with four conventional lugs instead of Bovet’s bow-and-crown configuration. Dimier decorates the Récital models’ movement plates with an unusual concentric circular striping pattern rather than the lateral Côte de Genève. Dimier will produce 150 Récital models, utilizing some of the tourbillon production capacity that became available when Raffy eliminated most of STT’s previous clients.

“Today there is very little difference between Vallée-de-Joux finishing and what is now possible in other parts of Switzerland,” says Raffy, who believes his finishers in Tramelan are now on a par with those in the Vallée-de-Joux, Switzerland’s capital for movement finishing.

Although impressive, Dimier’s finishing displays evidence that the firm employs handheld machines to complete this process. When viewed under the loupe, some of the sharp corners of the anglage—the beveled edges of the movement plates—exhibit telltale feather marks. To avoid these blemishes, the most traditional finishing specialists, particularly in the Vallée-de-Joux, emphasize polishing with a wooden stick coated with abrasive paste. Such tiny details, virtually invisible from outside the case, remind us that some watchmaking arts cannot be mastered overnight.

In addition to investing $16 million in Dimier, Raffy also purchased a 14th-century castle, the Château de Môtiers, in Val-de-Travers, where Bovet has not had a presence in 50 years. (The company’s headquarters are located in Geneva.) Raffy plans to convert the drafty hulk, which a descendant of the Bovet family bequeathed to the canton of Neuchâtel in 1957, into a design and watchmaking facility. A cost-conscious executive at a watch conglomerate might have balked at such an extravagance, but for Raffy, the castle embodies the image he has been honing for Bovet.

Raffy relishes his role as the father figure at a reborn company; his employees treat him with a near-filial reverence. The familial atmosphere even pervades Bovet’s business dinners, at which Raffy sometimes has taken the mic and crooned romantic standards. (He does a creditable Frank Sinatra.)

Directing the future of Bovet amounts to a watch collector’s ultimate fantasy, and Raffy’s collector perspective shapes his vision for the company. But he points out that his lifelong education in watches, which began with his grandfather’s lectures, was incomplete before he acquired Bovet. “We can appreciate a good meal or a good wine at a restaurant,” he says. “But that is never the same as working in the kitchen.”

After Pascal Raffy acquired STT in 2006, he instituted several changes, including a complete overhaul of its flagship tourbillon movement, which was the Swiss market’s first low-cost tourbillon. Traditionalist manufacturers resent the very idea of a bargain-priced tourbillon, one of the most revered complications and one that has become extremely popular in recent years.

Speaking anonymously, watchmakers familiar with the STT movement describe it as a workhorse, but they note that finished movements—even after modifications to the original Progress Watch design—were plagued with inconsistencies. Hairsprings, for example, were mounted with glue rather than with pins, a method that can produce good results in theory but seldom was perfectly executed in practice. Harry Winston and other companies that modified the movement used pins instead of glue. Furthermore, former STT watchmakers have acknowledged that the tourbillon carriage was unbalanced, sometimes generating visible wobbles as it rotated.

Aware of the movement’s shortcomings, Raffy directed his watchmakers to completely redesign it, increasing the stability of the original flying tourbillon configuration, for example, with an additional bridge across the top. “We have revised everything in this movement, from the cage to the barrels,” says Hervy Schlucter, who heads the watchmaking department at Dimier 1738, the name Raffy gave to STT after he acquired the company. “It is now on a completely different level of quality.”

Still, these revelations are disconcerting, considering that watches powered by the original STT movements are commonly found on the market. The final quality of these timepieces ultimately is determined by the purchasing brand’s ability to identify and correct potential problems during final assembly and quality-control procedures. But watch companies’ secretive natures make it difficult to determine just how these brands improved the troubled mechanisms. For example, when asked about this subject, Harry Winston—for which respected English watchmaker Peter Speake-Marin made several modifications to the STT movement as he has for his own tourbillon (pictured)—declined to comment on the specific measures it took to transform a movement that once sold for approximately $6,000 into the $110,000 platinum Excenter Tourbillon.