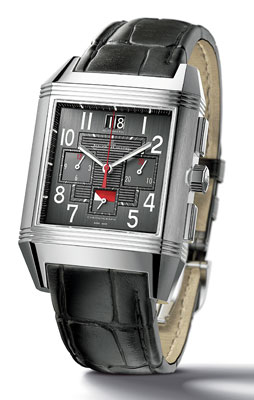 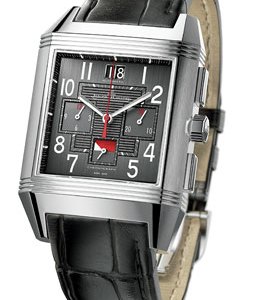 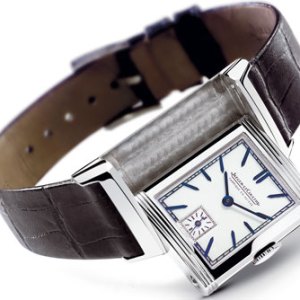 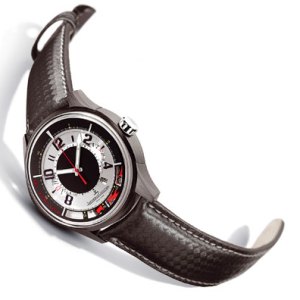 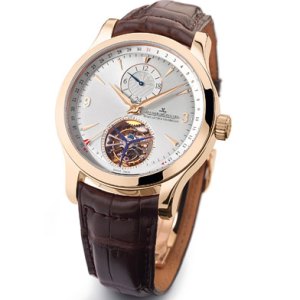 Jérôme Lambert, Jaeger-LeCoultre’s 37-year-old CEO, understands that it will take more than his pet slogan “sky’s the limit” to change the culture and perception of a brand with a 173-year history that is strongly rooted in conservative classicism. So, over the last few years, Lambert has refocused the company’s design department to develop some of Switzerland’s most innovative timepieces. While some staff members insist that little has changed at the factory in Switzerland’s Vallée de Joux, the technically advanced and contemporary designs of the last three years—including the Master Compressor chronographs, the highly complicated Gyrotourbillon, and the revamped Reverso—tell a different story.

When it acquired Jaeger-LeCoultre in 2000, the Richemont Group conglomerate put Lambert, Jaeger’s financial controller, in charge. He inherited a healthy prestige brand, but one with designs that were not particularly progressive. Jaeger-LeCoultre has a reputation for producing exceptional movements, but for much of its history, the company has been performing this function as much for other brands—including Cartier, IWC, and Audemars Piguet—as for its own collection.

In 1991, Jaeger’s CEO at the time, Günther Blümlein, introduced the Reverso 60ème to celebrate the 60th anniversary of the Reverso model, an Art Deco watch with a rectangular, swiveling case that could be worn with the solid caseback displayed. Jaeger-LeCoultre originally designed the piece for European and Indian polo-playing clients who wanted to protect their watch crystals from flying mallets. While Jaeger had introduced a new case for the Reverso in 1985 when Blümlein arrived at the company, his 60ème’s larger dimensions made it possible to add complications. During the 1990s, as president of the LMH (Les Manufacture Horlogères) group, which comprised companies Jaeger-LeCoultre, IWC, and A. Lange & Söhne, Blümlein played pivotal roles in resurrecting the three brands.

Blümlein clearly recognized Reverso’s potential as a flagship design that embodied the brand’s history and technical character, but Reverso became a company obsession as management applied nearly every new development to that model throughout much of the 1990s. “The Reverso completely dominated product thinking,” recalls Nancy Fox, who was president of Jaeger-LeCoultre North America during the tenure of Blümlein and his successor, Henry-John Belmont. “It was very successful, but we were challenged as we tried to adapt it to everything from sport models to complications.” The growth potential of the classic rectangular Reverso also appeared limited in the late 1990s, when larger, round pieces with sporty, flamboyant styling became fashionable.

In 1992, Blümlein introduced the round Master Control, the first piece in the Master Control series, which was modeled on some of the brand’s designs from the 1950s and ’60s. The round case enabled Jaeger to adapt the collection to a more modern aesthetic, but senior management was reluctant to relinquish the brand’s classic character, which it maintained as it expanded the Master collection with new models. Lambert, however, viewed the Master as an opportunity to introduce edgier designs that would appeal to a younger audience.

In his previous role as financial controller, Lambert had no involvement in Jaeger-LeCoultre’s creative process, but as CEO, he immediately exerted his influence on the company’s product development. He reorganized many of the technical and creative personnel into cells that could work on a number of different projects simultaneously. He also hired new watchmaking talent and tried to foster some of the younger creative team members. Among them was designer Magali Metrailler, who had shown promise with her work on power reserve indicators for the Master watches produced at the end of Belmont’s tenure. Lambert encouraged Metrailler and her colleagues to exercise their imaginations on the Master line. They responded by endowing the watches with a number of the brand’s most significant technical developments.

Still, change came slowly at Jaeger-LeCoultre. “I liken it to baby steps,” says Stephane Belmont, product development manager and son of former CEO Henry-John Belmont. “Each new product showed us that we were capable of a little bit more. A few of them were milestones of change.” Among the watches Belmont cites are 2003’s Master Eight Days, which featured a new in-house eight-day movement in a redesigned larger case. The following year’s Master Compressor, with its prominent twin screw-down crowns and large template-style numerals, sent what must have seemed like a blast of punk rock echoing through Switzerland’s classical watchmaking valley.Meanwhile, the company has continued to demonstrate its complicated watchmaking virtuosity, which is now underscored with contemporary, rather than traditional, style. In the last two years, Jaeger-LeCoultre has released overtly technical interpretations of both the tourbillon and minute repeater complications, which it previously had produced almost exclusively for limited-edition Reversos. Both the Master Minute Repeater Antoine LeCoultre and the multiaxis Gyrotourbillon stand as modern benchmarks for the two mechanisms. The Master Minute Repeater has a gong attached to the crystal, a highly unorthodox—and visible—design innovation intended to amplify sound. The Gyrotourbillon’s multiaxis rotating cage is supposed to track time more precisely than the standard tourbillon designs. And this year’s Reverso Grande Complication à Triptyque utilizes the Reverso’s unique swiveling case construction to incorporate three dial displays with 18 different complications—a total that allows it to vie for the title of world’s most complicated wristwatch. For such complex achievements, Jaeger-LeCoultre’s designers conceived the movements and cases simultaneously, so that form complemented and enhanced function.

This design method has enriched even less-complicated models such as this year’s AMVOX2 Chronograph, which features a depressible crystal that replaces the standard chrono-pushers. Such pieces emphasize the brand’s status as a manufacture—a company that makes most of its watches’ key components on its own. This capacity has enabled Jaeger to offer its new Master Tourbillon at prices from $47,500 to $65,000, which is significantly less than similar models from other brands.

Driving Jaeger’s evolution beyond the constraints of its legacy is the force of Lambert’s personality. Moving from department to department, he converses freely with the entire staff, encouraging them and challenging their problem-solving capabilities. He immediately impresses with his high energy level and his ability to shift quickly from discussing one topic to the next with a depth that suggests he directly supervises every detail of the company’s operations. Lambert’s enthusiasm for the brand appears to be spreading to the company’s watchmakers and designers, many of whom describe themselves as newly motivated and proud of Jaeger-LeCoultre’s recent advances.

But the CEO’s youthful exuberance can sometimes go too far. During a recent promotional excursion to witness Jaeger-sponsored French rower Emmanuel Coindre complete his journey across the Pacific, Lambert made the impromptu decision to intercept him at sea in a fishing boat—despite high winds and 15-foot seas. The blanched and wobbly Asian media members on the voyage would doubtless have appreciated a more measured approach.

Lambert has faced both internal and external critics. Some purist aficionados and former Jaeger employees bemoan Lambert’s new direction, which, they say, undercuts the brand’s long-standing image. Others fault his background in finance, which rankles those who revere the multigenerational horological legacy represented by former CEO Belmont, whose father was in the French watch business in Besançon.

Nevertheless, Lambert has achieved results that his predecessors did not deliver, and the company’s profile as an elite watchmaker is higher than it has ever been. These achievements emboldened Lambert to dare to update the Reverso itself. The Reverso Squadra, which marks the model’s 75th anniversary this year, bears all the hallmarks of the new Jaeger-LeCoultre. Its big and bold square case reportedly was based on an alternate 1930s design. The World Chronograph model, with its readable and flamboyant black-and-white indexes, is particularly edgy, as well as functional. The Squadra sheds Reverso’s classicism, but it remains to be seen whether the new design will have the longevity of the original, which is still the brand’s flagship model.

“When it is your time, you have to act,” says Lambert, who has no reservations about the changes he has wrought. Regardless of whether you admire the updated direction at Jaeger-LeCoultre, you cannot help but recognize the creativity and innovation that Lambert has extracted from what was one of the most staid manufacturers in Switzerland. You also have to acknowledge that even though his background is in finance, Lambert’s vision extends well beyond the bottom line.