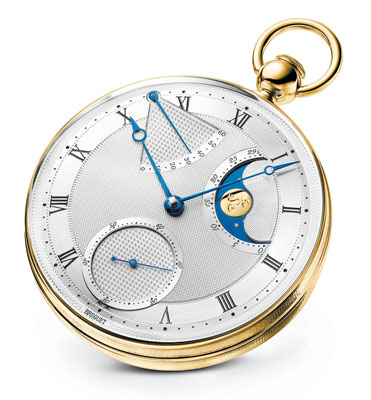 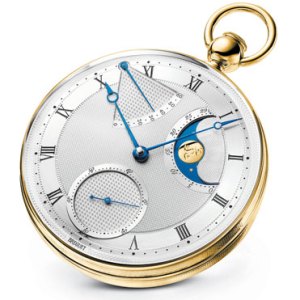 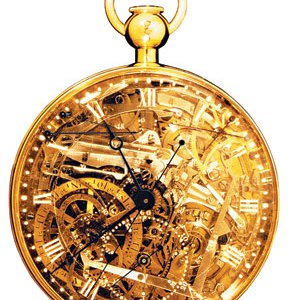 Nicolas Hayek did something that every serious watch collector only fantasizes about: He ordered the reproduction of Abraham-Louis Breguet’s most coveted creation, the so-called Marie-Antoinette pocket watch. An acquaintance of the French queen, possibly her lover, commissioned the original timepiece, which, with every then-known complication under a transparent rock-crystal dial, was the most complicated watch Breguet ever had attempted. The house of Breguet did not complete this magnum opus until 1827, 34 years after the queen’s untimely death in 1793, and four years after the death of A.-L. Breguet himself. The timepiece passed through the hands of numerous collectors over the ensuing centuries, but its present whereabouts is unknown; thieves stole the watch from a Jerusalem museum in 1983. Because the piece is so famous and recognizable, it is unlikely to appear on the legitimate market for the foreseeable future. Breguet’s watchmakers therefore are basing the reproduction on sketches of the original that had been stored in the company’s archives. When it is completed later this year, the reproduced Marie-Antoinette pocket watch will become the centerpiece of the Breguet museum in Paris.

Clearly, Hayek is not an average collector. As chairman of the Swatch Group, parent company of some of the largest and most prestigious watch manufacturers in Switzerland (including Breguet), Hayek is acknowledged to be the most powerful man in the watch industry. He is fascinated by the work of A.-L. Breguet, who in the 18th century similarly dominated the watchmaking realm by conceiving and developing some of the craft’s most important complicated constructions, including the tourbillon. Hayek not only collects A.-L. Breguet timepieces, he is intent on strengthening the current incarnation of the brand by linking it to the founder. The Marie-Antoinette replica—in addition to recent reproductions of the 18th-century No. 5 pocket watch and the historically influenced La Tradition wristwatch—draws the strongest connection yet between the historic figure and the modern firm.

Hayek not only collects A.-L. Breguet timepieces, he is intent on strengthening the current incarnation of the brand by linking it to the founder.

In his 23 years in the watch business, the 77-year-old Hayek has earned a dichotomous reputation. His role in launching Swatch, an effort that helped the Swiss industry overcome the quartz crisis of the 1970s, made him a national hero who still fields autograph requests at public appearances. But his power is resented in some watchmaking quarters, and critics have accused him of pursuing heavy-handed, seemingly monopolistic policies because he controls so many premier brands as well as movement and component manufacturers.

He is much more of an industrialist than are his peers, and he coolly exploits the economies of scale presented by his holdings. His approach has some shortcomings, however: Over the past few years, Swatch Group brands have been chided for employing readily available components that do not represent real links with their heritages.

A similar problem plagued Breguet long before its acquisition by the Swatch Group in 1999. After the Breguet family sold its interest in the company in 1870, subsequent owners produced timepieces that were respectable but did not display the level of innovation and craftsmanship established by the founder. The coin-edged cases and silvered, guilloched dials evoked the widely copied aesthetics of A.-L. Breguet, but the mechanics were modern industrial Swiss; Breguet purchased its movements from Nouvelle Lemania (which Swatch also acquired, in 1993). Despite their impeccable quality, the mechanisms had more in common with other contemporary top-tier watches than with anything that A.-L. Breguet created.

“Our goal is not to create accurate reproductions of the past, but to move the brand forward . . . in the spirit of what Breguet would have done.”

Hayek slowly has changed this formula. He has upgraded Nouvelle Lemania and folded it into a new Manufacture Breguet entity that continues to supply select companies inside and outside the Swatch umbrella. Swatch brands still share technical innovations, as evidenced by the 2004 alarm caliber, which appeared simultaneously at Breguet and at its sister company Blancpain. But concurrently, Hayek has been investing considerable resources in developing distinctive pieces that underscore Breguet’s ties to its founder.

For Hayek, revitalizing Breguet is a personal matter. His devotion to vintage Breguet watches is a passion he seemed to acquire when he obtained the brand. In the last five years, Hayek has spent well over $10 million purchasing original Breguet timepieces at auction and assembling his collection, which is housed in the brand’s museum. These historic pieces are the basis for the new direction at Breguet, but the impetus came from an outside source. “A very wealthy client, whom I dare not name, was admiring Breguet’s No. 5 watch in our collection and asked to buy it,” recalls Hayek, who refused to sell the original but offered to re-create the timepiece—a quarter-repeating pocket watch with Breguet’s Perpétuelle self-winding system and his Pare-chute shock-protection system. A three-year effort culminated in the completion of five No. 5 replicas, each priced at approximately $1.2 million.

Replica may, however, be a misnomer. Breguet’s designers and watchmakers re-created many aspects of the original piece, including the finish and rough layout of the original movement, but they did so utilizing current watchmaking techniques. The metals are all modern alloys, and many of the constructions—from the escapement to the shock-protection system—represent the latest engineering and technology advances.

The No. 5 replica is essentially a specialty piece, but its peculiar blend of modern and antique constructions influenced the design of La Tradition (ref. 7027, $21,500), a wristwatch sporting a new manual-winding caliber that debuted last year. The movement possesses both the symmetry and matte gold finish that were characteristic of A.-L. Breguet’s Souscription watches. The frosted finish is particularly difficult to execute because slight scratches are much more apparent on it than they are on a conventional Swiss perlage or Geneva striping finish. A modernized (and patented) version of the original Pare-chute provides shock protection for the balance, but this piece is distinguished most by the aesthetics of the movement—the symmetry, construction style, and frosted finish of antique Breguets—visible through a transparent dial. Hayek intends to incorporate this movement, which is designed to accommodate additional functions, into a full line of more complicated timepieces.

Hayek is driving Breguet’s new direction that pays homage to brand history and pedigree while capitalizing on advanced technology. The strategy is consistent with the ones he employs for many of his other marquee brands, but when applied to the Breguet name, it carries a higher profile. Breguet purists might long for some of the ingenious but now antiquated constructions of the vintage pieces, but Hayek dismisses the idea of producing such watches. “Our goal is not to create accurate reproductions of the past,” he explains, “but to move the brand forward with modern materials and technology in the spirit of what Breguet would have done.”

Interpreting the intentions of the most influential figure in watchmaking history is a task few in the industry would consider themselves worthy of tackling. But Hayek, a larger-than-life figure himself, seems well suited for the endeavor.