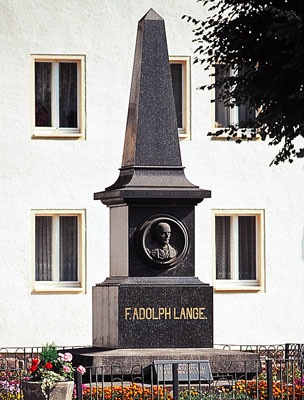 Once you have encountered the hopelessly fastidious Swiss, it is easy to understand why they excel at manipulating tiny metal parts. But these days, watch collectors are looking beyond the Swiss to their similarly rigid-jawed neighbors to the north, the Germans. In particular, two relatively new (or rather, newly reconstituted) companies, A. Lange & Söhne and Glashütte Original, are drawing critical praise.

Both are located in the tiny Saxon hamlet of Glashütte, and both claim to embody the legacy of German watchmaking that once thrived there. Though neither will acknowledge the other’s achievements—their rivalry borders on bitter—the two companies have both developed a particularly Teutonic quality that can be compared to the German style of auto-making: sober, utilitarian, and precise. This gives the watches a solid and masculine air, free of the frills found in Swiss timepieces, with their enervating French influence. Even the ladies’ models could be likened to a German brassiere, in which allure comes in third after performance and reliability.

However well-defined these timepieces may appear to be, the mechanical fine points are what draws true watch lovers to them. Their unique movement construction is the re-pos-itory for what remains of the Glashütte watchmaking tradition and distinguishes these brands from typical Swiss fare.

Located just a few miles outside Dresden in what used to be East Germany, Glashütte may be the world’s most watch-obsessed town outside of Switzerland. In the town center, the bronze statue of Ferdinand Adolph Lange, who first brought watchmaking to Glashütte, serenely gazes at a distinct lack of activity, indicative, perhaps, that little else occurs in Glashütte except watchmaking. The revival of Glashütte’s watchmaking industry (seven companies are based there) is evident only in the newer buildings in town. Their occupants, as a matter of form, rarely look up from their work, much less occasion a breach of the peace.

The scene is probably much the same as it was in the 19th century, when pocket watches from Glashütte were regarded as some of the best in the world. Lange, the most esteemed maker, collaborated at times with other talented artisans who came to work in the village in the middle of the century, and their pieces, made under a variety of names, evolved into a distinct look, visible not so much in the dial and cases as in the movements.

These decorated, highly finished movements are immediately identifiable to a knowledgeable collector. Most Swiss movements, for instance, appear as a lacework of fancy-shaped bridges that make up the visible uppermost surface of the movement. In the Glashütte watches, a solid three-quarter plate covers everything except the area where the oscillating balance wheel and escapement are located. Also, in a Glashütte watch, nearly every screw in the movement has been “blued,” a process in which the screws are heated until they acquire a bluish tint. Furthermore, the watch’s jewels—the synthetic sapphires that act as miniature bearings—are housed in gold casings, called chatons, and secured by three blued screws. Weighted balance wheels adjusted by an elongated swan-neck regulator have kept these watches ticking since the early days. To some, these details might represent punctilious niggling. To others, especially the manufacturers, they are critical links to their heritage.

The Glashütte watch tradition that flowered in the 19th century died a slow death in the 20th. War, economic upheaval, more war, and finally communism ultimately eliminated the area’s fine watchmaking capacity. The last remaining concerns were nationalized under the Soviet-backed German Democratic Republic into a mass-production collective known by the German acronym GUB. With annual production in the millions of pieces, these watches may have been the pride of the Eastern Bloc, but they were not examples of prestige watchmaking. The entrepreneurial efforts that followed the fall of the Berlin Wall brought the luxury watch back to Glashütte, while simultaneously introducing modern hallmarks that have shaped German watchmaking as much as any of the historical traditions.

In 1990, Walter Lange, a descendant of Glashütte watchmaking patriarch Ferdinand Adolph, sought to seize the opportunity presented by the fall of communism. However, he soon encountered immense bureaucratic and technical challenges associated with producing a luxury product in a country still in the process of transforming itself into a free market society. The solution to Lange’s problems came from Switzerland, specifically in the form of Günter Blümlein of the International Watch Co., whose expertise and capital would leave a permanent mark on the reborn A. Lange & Söhne company.

IWC is the only Swiss watch manufacturer in the German-speaking region located in the northern part of Switzerland, and, as such, it had some affinity with the nascent watchmaking efforts of its neighbors to the north. The connection between the companies remains strong today. The effigy of Blümlein, who died in 2001, stands guard over the main entrance to the Lange headquarters, and for many years, IWC supplied parts to Lange and trained its watchmakers. Many of the senior craftspeople and engineers, cherry-picked from the staff of the old GUB, have spent time updating their techniques at the IWC facilities on the Rhine in Schaffhausen.

Walter Lange was not the only German entrepreneur who saw gold in Glashütte’s watchmaking potential. In 1994, West German industrialist Heinz Pfeifer purchased what was left of the GUB, including the facilities and remaining staff, to establish Glashütte Original. “When I arrived, all the employees were completely demoralized,” says Pfeifer. “They received an even greater shock when I announced what kind of watches I wanted to produce. At first they couldn’t believe they were capable of making luxury watches in that price range.”

Although both A. Lange & Söhne and Glashütte Original have since been purchased by the major watch conglomerates Richemont and Swatch Group, respectively, Glashütte remains a watch industry backwater with an imposed self-sufficiency that has benefited its two premier com-panies. Both are considered genuine manufactures, belonging to that small group of watch companies that use proprietary movements made in-house. Each company also operates its own watchmaking school to ensure a steady future supply of qualified labor.

The reality of a 21st-century manufacture, however, is far from the presumed image of the grizzled watch-maker hunched over his workbench. Modern watch companies are be-holden to the miracles of computer-aided design and manufacturing. Any movement part designed in three dimensions on a computer can be fabricated within minutes to fantastically close tolerances by automatic machine tools. This gives relatively small companies such as Lange and Glashütte Original, whose production is confined to just a few thousand pieces, the freedom to create new models. Larger companies, which cannot afford the labor required to hand-adjust their movements for accuracy, face much higher costs to develop movements that can be reliably mass-produced.

In fact, it is the time both companies lavish on finishing their watches that places them in the top echelon of watchmakers. Lange, the company that remains preeminent in finished quality, has long stated that its benchmark is none other than Patek Philippe. Each plate of a Lange movement, even those that will never see the light of day, is engraved with a distinctive, circular grained perlage pattern. The whole movement is assembled, tested, disassembled, and then polished again before the final assembly. Working surfaces of levers and gears, chamfered edges, and even screw wells are given a mirror polish before they are deemed complete. Only a rabid enthusiast may remember, much less ponder, such details behind his watch, but this is where the company flaunts its genius.

Finishing at Glashütte Original is of a more traditional character, and more faithful to the old Glashütte techniques. Surfaces of the bronze movements receive the time-honored “tin glazing” finish, which is created by handrubbing them against a block of tin until they are mirror smooth. Edges are chamfered and finished not with Swiss-style hand tools, as the company likes to point out, but by a quaintly antique belt-driven machine that en-sures each edge receives a consistent angle.

Meticulous finishing may have been one of the specialties of the original Glashütte watchmakers, but complications are the yardstick by which many collectors measure brands. Many complicated mechanisms were built in old Glashütte, but most were derived from Swiss designs. This inconvenient piece of history has not stopped either of the town’s two premier manufacturers from developing an interesting spin on complicated watchmaking, and this may be the most important modern update to the story of Glashütte watchmaking. The town’s freedom from the sometimes stifling Swiss watchmaking tradition has allowed the designers at the two brands to put a uniquely Germanic stamp on complications: Functionality is everything.

“Instead of re-creating the same thing over again, we try to make something new and useful,” says Helmut Geyer, head of movement design at Lange. The approach can be seen in something as simple as the outsize date on the company’s signature Lange 1 wristwatch, or the unpretentious but eminently practical zeroreset function in the company’s automatic calibers. Used together in a watch such as the Langematik Perpetual, the combination makes for one of the most user-friendly perpetual calendar watches in production.

Glashütte Original offers its own interpretation of utility with recent models such as the PanoRetroGraph, a much-praised chronograph that also counts backward. The entire PanoDate line, from appearance to function, is characteristic of the emerging spirit of German utilitarian watchmaking.

The similarities in appearance and function of the companies’ watches have done little to quell their rivalry. In the trenches, much attention is paid to which company was first with this or that feature, but to focus on these debates is to lose sight of the greater achievements of the two firms. Both have become esteemed luxury watchmakers that have advanced the stature of their native town far beyond what it had been in its previous glory days. The Glashütte watches are now more German than ever, and this has to be more than either could have hoped for.