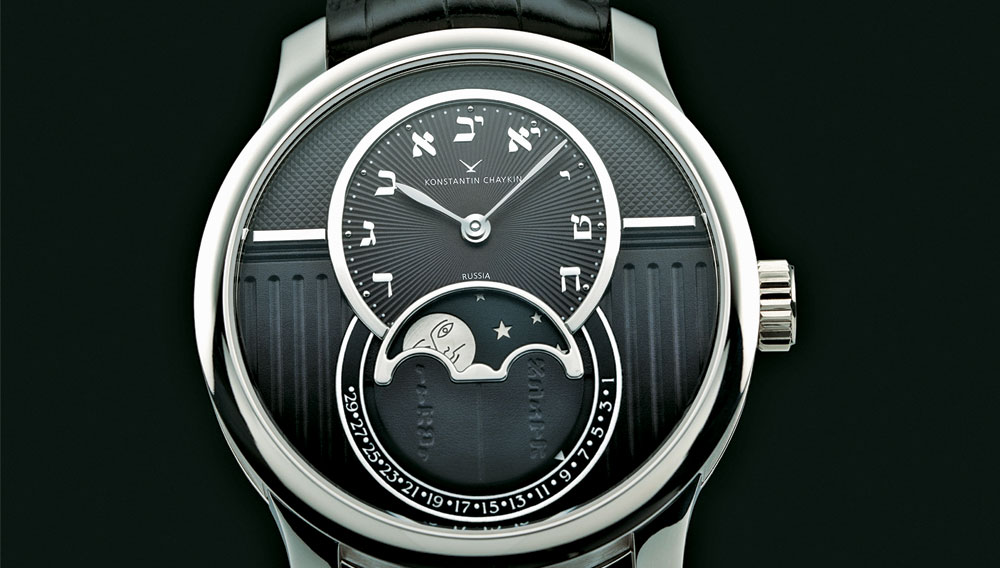 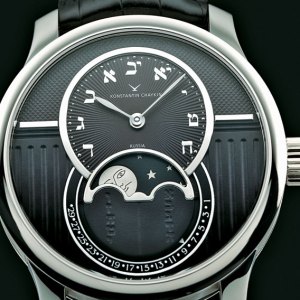 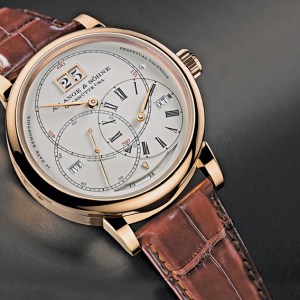 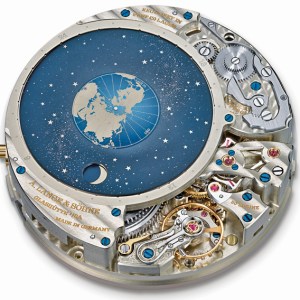 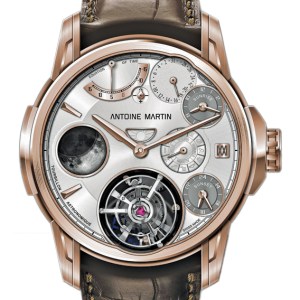 In 1754, a great fire destroyed the Jewish ghetto in Prague. Rebuilding their central square, the community leaders commissioned a Habsburg court clockmaker, Sebastian Landesberger, to make a timepiece worthy of the new Jewish City Hall. With a single movement he built two clocks, one atop the other. The higher one was conventional with gilded Roman numerals. The lower, however, was numbered with Hebrew letters, to which Landesberger gave a unique horological twist. Since Hebrew is read from right to left, he made the clock’s hands rotate in reverse.

The Hebrew Clock became legendary, celebrated by 20th-century poets including the French modernist Guillaume Apollinaire. “The hands of the ghetto clock run backward,” he wrote in one of his most influential poems. “You also creep slowly backward through life.” The surrealist Philippe Soupault dubbed Landesberger’s invention “the clock of memory,” and Blaise Cendrars made it a metaphor for the entire world, which “like the clock in the Jewish Quarter of Prague, desperately revolves backwards.” Each in their own way, the poets made explicit what many people experienced: The simple mechanical act of showing the hours running counterclockwise can induce nothing less than an altered perspective on life.

A similar transformation has recently been miniaturized by the Russian watchmaker Konstantin Chaykin, who further developed the concept with a calendar function in his Decalogue Luah Shana wristwatch. Like the time, the calendar indication turns counterclockwise, as if backing toward the future. Furthermore, the numerals run only to 29, corresponding to the 29 days in the lunar calendar that guide Jewish religious life. The explicit correlation of this calendar with the moon—and of the moon with the months—is reinforced by the moonphase window directly above the numbers. In the Decalogue Luah Shana, the moonphase and calendrical disc are one and the same. This watch of memory is also a reminder of where our sense of cyclical time began.

Keeping Up to Date

Another way to think of time is in terms of important events, especially those of personal significance. While the calendars on most watches are based on astronomical phenomena—inherently the same for everyone on the planet—the Lang & Heyne Augustus I contains a customized calendar that displays anniversaries of importance specifically to the wearer. When he selects one of the 12 momentous events, the name appears in a window at the bottom of the dial, and the date that it originally took place is indicated in a window at the top. Just below the date are two retrograde hands that communicate how much time remains before the event’s anniversary. In addition, the watch is a sort of mechanical calculator, computing how long ago the commemorated event took place, as indicated on dials at four and eight o’clock. The combined effect provides a sense of both linear and cyclical time, the simultaneous feeling of encroaching age and perpetual renewal through annual celebration. If the Decalogue Luah Shana is a watch of memory, carrying the wearer slowly backward through life, the Augustus I is a watch of reminiscence, embodying the complex action of time as a psychological phenomenon.

A perspective from inside the timepiece itself might be one way to describe the central idea behind the Urwerk EMC (Electro Mechanical Control), the first mechanical wristwatch to incorporate an electronic system monitoring the watch’s own precision. The EMC is based on a standard watchmaking instrument that determines whether an escapement is fast or slow by comparing it to the regular beat of an electronic oscillator. Urwerk has scaled down the instrument and integrated it into the mechanical movement. By turning the crank of a generator on the side of the watch, an optical sensor measures the oscillations of the mechanical balance wheel and a special circuit matches that data against a quartz reference. The comparison is displayed on a retrograde dial marked from –20 to 20, indicating the loss or gain of seconds per day. On that basis, the wearer can adjust the escapement by turning a screw that alters tension in the balance spring. Urwerk presents the innovation as a means of optimizing the watch for your personal lifestyle, since factors including physical activity and ambient temperature minutely affect timekeeping. The quartz oscillator also resonates conceptually: The watch is in a constant state of self-evaluation, visceral mechanical motion measured against an electronic abstraction. It embodies the wearer’s own tension of being an analog creature required to sync with the digital technology all around him. Like the gears and springs inside the EMC, our internal sense of time seems to be ticking toward obsolescence.

The most famous clock in Prague is several centuries older than the one in the Jewish quarter. Adorning the Old Town City Hall, it shows local time in three different systems—Babylonian, Bohemian, and Central European—in relation to the universal time of the heavens as exhibited by a mechanical zodiac. If the Hebrew Clock encourages every man to search inside himself for the meaning of time, the Astronomical Clock of Prague counters that time is much greater than mankind.

That premise, as well as some of the clock’s manifold indications, finds new expression in contemporary astronomical wristwatches such as the Antoine Martin Tourbillon Astronomique, the A. Lange & Söhne Richard Lange Perpetual Calendar Terraluna, and the Arnold & Son DBS Equation Sidereal. The Astronomique, for instance, shows the time of sunrise and sunset, the calculation of which is inherently specific to a given location, and it also shows declination, an indication of where on earth the sun is directly overhead at noon. These indications are astronomically related, since both are consequences of the planet’s tilt, yet the relationship cannot be directly experienced since you can only be in one place at a time: Sunrise and sunset are unavoidable daily events, while declination is apprehended only by careful calculation. On the Astronomique, sunrise and sunset indices on the dial are calibrated to the wearer’s latitude and longitude with customized gear work. Declination is shown through a window on the case back, which reveals a world map with a red line that annually moves between the Tropics of Cancer and Capricorn. By building both indications into the same watch, watchmaker Martin Braun mechanically meshes the local and the global. The turning cogs and cams in between make the relationship palpable.

The Terraluna, on the other hand, visualizes a familiar astronomical phenomenon from an unfamiliar perspective, revealing why the moon appears to wax and wane. The transparent back of the watch features a unique display—sort of a mechanical orrery, in which the earth is shown to rotate while the moon revolves around it. As the discs representing the planet and moon turn, the moonphases are shown, as is the relationship of both orbs to the sun (represented by the balance wheel). The wearer can see in real time how the combined orbital motion carries the moon through earth’s shadow, making the sphere appear to become a diminishing crescent as earth, moon, and sun fall into alignment. The mechanism that turns the discs is phenomenally precise, measuring the lunar month down to the second, such that the moonphase indication need only be adjusted by a day every 1,058 years. Earth’s rotation is also nearly exact, as is the apparent motion of stars in the sky, which makes the Terraluna function as a dynamic map of the night sky as seen from anywhere in the northern hemisphere. The watch encourages the viewer to look up, and to keep time on the heavenly clock that human mechanical genius can only emulate.

Where Did the Time Go?

Among the many other curiosities on Prague’s Astronomical Clock is a hand marked with the sun that indicates sidereal time. Our standard 24-hour day is the cumulative effect of our planetary spin and earth’s rotation around the sun. Sidereal time eliminates the 3 minutes and 55.9 seconds contributed by our annual solar orbit. In other words, it’s the true measure of earth’s rotation from an infinitely distant vantage point. Crucial for consistent astronomical observation, sidereal time was integrated into some of the finest watches as pocket chronometers came to rival the accuracy of pendulum clocks in the late 18th century. A couple of exemplary pieces made by John Roger Arnold, son of likewise noted horologist John Arnold, were remarkable not only for their technical perfection but also for their visual simplicity: two unembellished enamel dials showing mean solar and sidereal time, side by side. The modern firm of Arnold & Son has adapted this concept for the wrist with the DBS Equation Sidereal. Since the difference between sidereal and solar time is not a simple fraction that can be churned out by gears, the DBS incorporates two distinct gear trains into a single mainplate, each with a separate balance wheel oscillating at a slightly different rate. The balance wheels are revealed in a cutaway at the bottom of the face. At the top is a subdial indicating the fluctuating difference between the two irreconcilable temporal systems. Though we can never reach the infinitely distant vantage point from which sidereal time is measured—or even travel to the nearest star—the DBS captures this distant perspective.