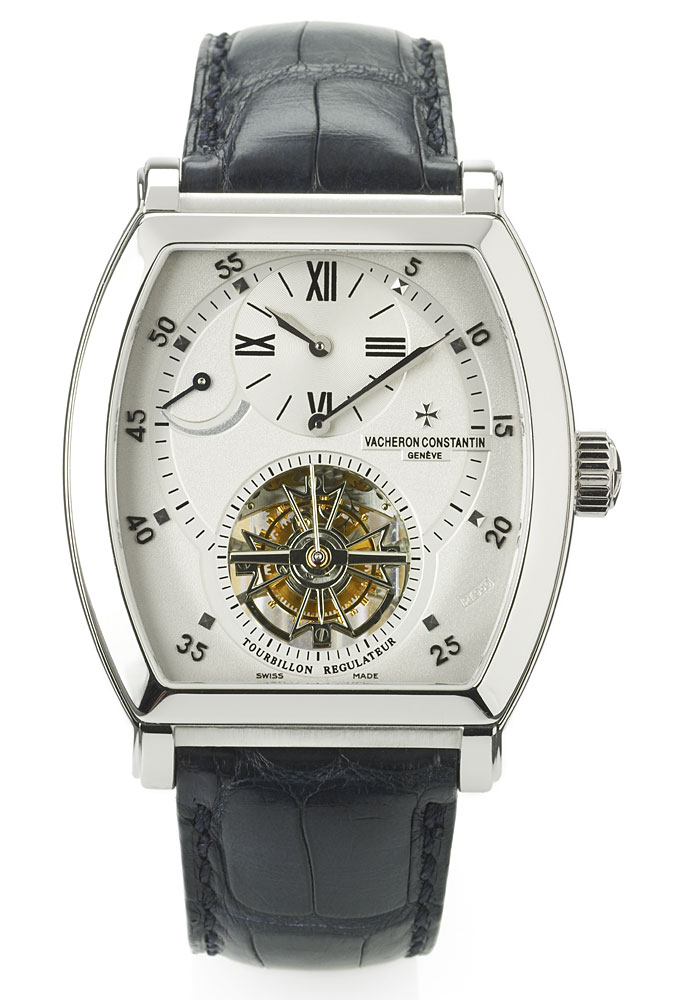 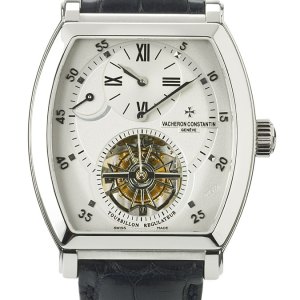 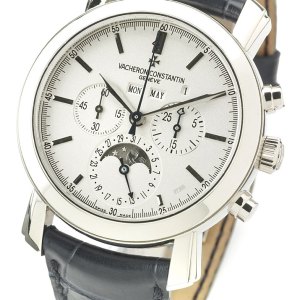 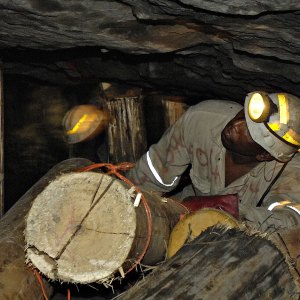 At nearly 3,300 feet underground, the air in shaft number 10 at South Africa’s Impala mine is warm, humid, and acrid. The smell is a mix of rotting timber from support beams and ammonia from the explosives used to mine the shaft. Single file, the members of our group—journalists and executives from the Geneva watchmaker Vacheron Constantin—creep through tunnels illuminated by the lights on our helmets. We step through puddles and trip over wire cables that are strewn on the ground.

Our subterranean tour is mercifully brief, though here at the mine in Rustenburg, a small city located about 65 miles northwest of Johannesburg, 26,000 miners work two eight-hour shifts per day. The mine, which is owned by the Implats group, a global platinum producer based in Johannesburg, annually processes 16 million tons of ore, the rock from which metals are extracted, including the most precious metal, platinum.

To produce enough platinum for a single wristwatch, about 20 tons of ore is blasted and dragged to the surface, from depths as great as 3,500 feet. That rock then undergoes more than 50 processes over the course of about six weeks to extract and refine the platinum concentrate into a bright yellow-orange “platinum salt” that is melted into pure platinum ingots. In late January, a 5-kilogram (a little more than 11 pounds) ingot was valued at more than $250,000. Platinum is 30 times rarer than gold, and the refined metal is 95 percent pure; 18-karat gold is 75 percent pure because it must be alloyed with copper and silver to harden it, while other metals are added to produce white gold.

Vacheron Constantin produced its first platinum watch in 1820, 15 years after British scientist W.H. Wollaston discovered a process for making the hard, dense metal malleable, thus expanding its commercial potential. Two years ago, Vacheron began highlighting its contemporary use of platinum when it introduced the Platinum Excellence Collection, which consists of advance editions of new models as well as special reissues of models from its current line. Vacheron produces the Platinum Excellence Collection watches in limited quantities, which vary depending on the complexity of the movements; the more intricate the movement, the fewer the number of watches. The Platinum Excellence watches feature not only solid platinum cases, but also sandblasted platinum dials. Vacheron marks each of those dials, in the space between 4 o’clock and 5 o’clock, with a PT950, the mark commonly stamped on platinum jewelry to indicate that the alloy used is 95 percent platinum. Vacheron also fashions the watches’ crowns, folding clasps, and other elements from the precious metal. As the Platinum Excellence Collection evolves, company CEO Juan-Carlos Torres says, Vacheron plans to expand its use of platinum, employing it to make bracelets and, ultimately, the movements themselves. “Step by step, we will try to make a watch completely in platinum,” says Torres, speaking by phone from Geneva.

Last fall in South Africa, Vacheron unveiled its two latest Platinum Excellence Collection models, the $190,000 Malte Tourbillon Regulator and the Malte Perpetual Calendar Chronograph. The Malte Tourbillon Regulator stands out for its large, tonneau-shaped case and its multilevel, oversize dial with separate, single-hand regulator displays for minutes and hours. Both the case and dial are made from platinum, as is the tourbillon cage. Vacheron will produce 50 pieces, each powered by a new manual-wind Caliber 1790 with a 40-hour power reserve.

The $139,900 Platinum Excellence Collection Malte Perpetual Calendar Chronograph, which also will be limited to 50 pieces, follows the Platinum Excellence Collection Malte Chronograph, which was released in 2006. Like its predecessor, the Malte Perpetual is powered by Vacheron’s reliable Caliber 1141, a hand-wound, column-wheel chronograph movement that is fitted with a perpetual calendar module. In addition to the dial, the watch’s moon-phase disk also is made of platinum.

“We wanted to prove that Vacheron Constantin is a master in all aspects of watchmaking, from the movement to everything around the movement,” says Torres, who notes that an increasing number of the firm’s clients are requesting platinum watches—and not just for highly complicated pieces, as one might expect. “The level of investment is not just for the movement,” he says.

As an example of how working with platinum is more labor-intensive than working with gold, Torres refers to the manufacturing process of the dials. “To produce 100 finished dials, you need about 300, because they are easily damaged,” he says, noting that the dials are produced by Stern Créations in Geneva, a longtime Vacheron partner. “This finish is so fine that any scratch or mark will show easily,” says Torres. Drilling the holes for the hands and for the numerals, which are applied to the dial, is a particularly delicate procedure, because the metal tends to stick to the tools.

Furthermore, it takes approximately three times longer to make a platinum case than to make a gold case, because platinum is so much harder. To reduce the friction that would quickly wear out their tools, the case makers have to use slower speeds and less pressure. Platinum also easily heats and subsequently deforms, so working with the metal requires the adept hands of an expert. “The prices of the pieces are not only based on the price of the metal,” says Torres. “There is lot of manpower going into these small series.”

A lot of manpower is invested before the platinum reaches Geneva, before it even becomes pure platinum. From the mine in South Africa, the ore is dredged up with giant scoops and loaded onto railcars for its journey to a nearby Impala facility ominously called “the concentrator.” Our group, after emerging from underground tightly packed into high-speed elevators, craving fresh air and daylight, boards a bus for the ride to the concentrator.

The industrial complex is filled with intertwining pipes and a row of enormous spinning drums containing water and steel balls, which tumble the ore until it has the consistency of talcum powder. Then the material is siphoned into huge vats that bubble over with a soapy liquid, a chemical cocktail that helps separate metal-rich particles from less-desired elements.

We board the bus again to follow the resulting concentrate’s path to the smelter, where workers, employing a technique similar to the one used to produce powdered milk or eggs, remove all moisture from the powder and then send it to the giant furnaces. There, at 1,400 degrees Celsius (more than 2,500 degrees Fahrenheit), the rock melts like lava, and metals are separated from silicas.

Each step in these so-called “mineral processes” is intended to reduce the volume of the material and concentrate the amount of precious metals in the remaining matter. At the end of the mineral processes, about 1 ton of ore has been reduced to about 1,000 grams (a little over 2 pounds) of powdery matte, which yields 1.6 grams, or less than half a teaspoon, of pure platinum, along with other metals. By comparison, a gold mine typically yields 5 to 6 grams of gold per ton of ore.

The powdery matte is transported to the Impala refinery in Springs, near Johannesburg, where the metals are extracted through a series of ion-exchange and chemical processes using chlorine, hydrochloric acid, and other chemicals. In a separate, base-metals refinery, copper, nickel, and cobalt first are removed from the powder. At the precious-metals refinery, we receive goggles and respirators, and we take note of heightened security. Before leaving the plant, each worker is searched and X-rayed; we are not subject to the same scrutiny. Here, the remaining black powder undergoes both chemical and ion-exchange processes, each of which extracts a different metal: silver, gold, palladium, ruthenium, platinum, rhodium, and iridium.

Fourteen days after the matte arrives, the refinery produces either platinum sponge (powder) or heavy platinum ingots from it. The sponge and the ingots are stored in a guarded vault as they await transport out of the country. Nearly all of South Africa’s platinum is exported on daily flights that depart Johannesburg’s OR Tambo International Airport.

Worldwide platinum production stands at approximately 7 million ounces (437,500 pounds) per year, and the Implats group is the world’s second-largest producer, with 2 million ounces processed in 2007. The automotive industry is the biggest (40 percent) market for the metal, which is used in exhaust pipes, catalytic converters, diesel engines, and fuel cells. The price of platinum has soared in recent years and hit a record price of $1,721 per ounce in late January. (Gold also has been breaking records, topping $900 per ounce early this year.) About 25 percent of the platinum produced is used to make jewelry and watches, but the metal’s escalating value has led watch and jewelry makers to produce fewer platinum pieces and to attach higher prices to them.

In contrast to the heavily industrial South African complexes that mine and refine platinum for such premium watches, Vacheron’s modern headquarters near Geneva is hushed and spotless. Watchmakers sit in rows at workbenches, filing and polishing tiny components under microscopes and assembling movements, probably never giving much thought to the efforts involved in producing their raw materials in South Africa. “We always emphasize and focus more on the movement and our passion for watchmaking,” says Julien Tornare, Vacheron’s North American president and a member of the group touring the mine and refinery. “But we tend to forget the difficulty involved in extracting a rare metal such as platinum from the earth.”