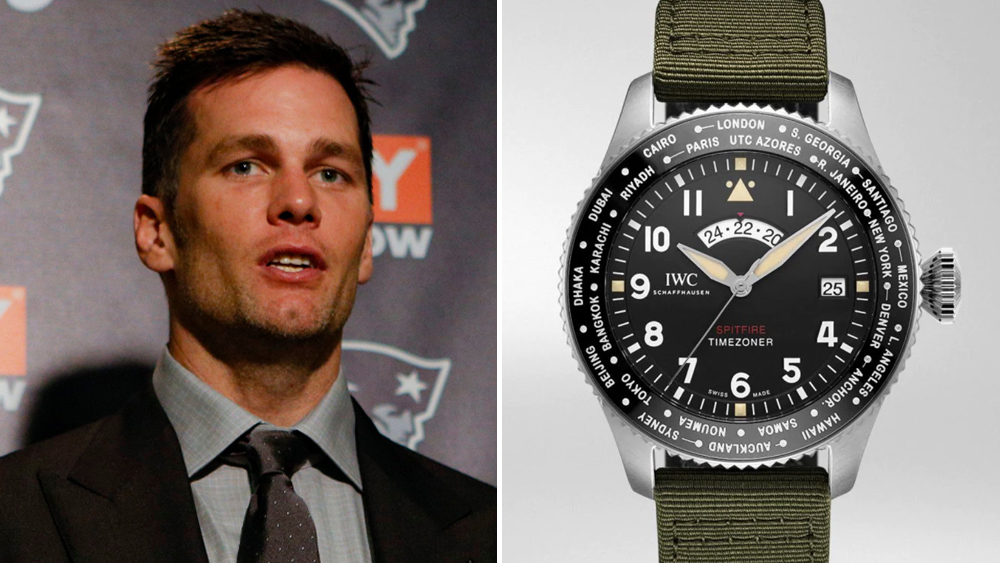 Football fans may still be in shock that Tom Brady won’t be a New England Patriot next season, but that’s not the only team he’s left in the past year. For proof, one need look no further than the IWC watch the quarterback was wearing when he signed his two-year, nearly-$60 million with the Tampa Bay Buccaneers last week.

That timepiece, which was prominently displayed in social media posts of the star signing his new deal with Tampa Bay, was the Swiss company’s Pilot’s Watch Timezoner Spitfire Edition “The Longest Flight.” While untouchably a stylish, retro-inspired timepiece, it’s particularly notable because up until a year ago Brady had been a brand ambassador for another Swiss watchmaker, TAG Heuer.

The new IWC watch, one of just 250 examples produced by IWC last year, is inspired by Steve Boultbee-Brooks and Matt Jones’s quest to circumnavigate the globe in one of the British Royal Air Force’s Spitfire jets. The special edition features a bezel that can adjust to different time zones with a simple rotation, a 24-hour display, a stainless-steel case, an IWC-manufactured 82760 calibre with Pellaton winding and a 60-hour power reserve.

While it may not have garnered as much attention as Brady’s decision to trade Patriot blue for Buccaneer orange after 20 years, the watch lover agreed to move from TAG Heuer, who he had been signed to since 2015, to IWC last summer. So that prominently displayed Spitfire should also come as no surprise to anyone.

If you want to get your very own Spitfire to adorn your wrist, you may be in luck. While the $12,400 watch received an extremely limited production run, IWC’s website says some are still available for purchase. Head on over to the timepiece’s listing for information on how to reserve yours today.

Excited, humble and hungry …if there is one thing I have learned about football, it’s that nobody cares what you did last year or the year before that…you earn the trust and respect of those around through your commitment every single day. I’m starting a new football journey and thankful for the @buccaneers for giving me an opportunity to do what I love to do. I look forward to meeting all my new teammates and coaches and proving to them that they can believe and trust in me…I have always believed that well done is better than well said, so I’m not gonna say much more – I’m just gonna get to work! #Year1 p.s. Jack Brady with the photocred 😀