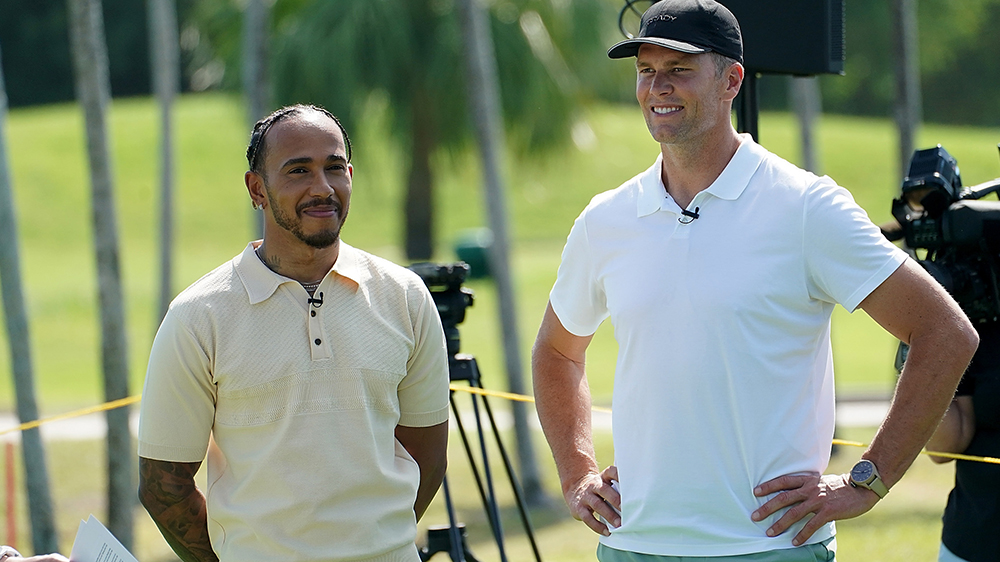 The timepieces, which Formula 1 champion Lewis Hamilton, NFL quarterback Tom Brady and others wore in IWC’s Big Pilot Golf Challenge last week, were sold in a Bonhams auction that generated over $100,000.

All of the timepieces in the auction are part of IWC’s Top Gun line. Brady’s sand-colored ceramic timepiece, seen above, is a pleasing time-and-date watch. It’s powered by the Calibre 52110 automatic movement, which achieves an impressive seven-day power reserve with an indicator at 3 o’clock. It’s one of just 250 examples made this year, and is the first Big Pilot to appear in this colorway and material. The lot, which sold for $30,000, above its $25,000 low estimate, came with a set of the football player’s own Callaway golf clubs.

Hamilton’s watch doubles down on the complications, featuring both a perpetual calendar and moon phase indicator. It’s powered by the 52615 movements, and it is understandably rarer than the watch Brady wore. IWC made only 150 of these watches. It came with a signed pair of racing shoes that he wore during the 2022 Bahrain and Saudi Grand Prix, and sold for $55,000, just north of its $50,000 low estimate.

The sale’s proceeds will benefit Laureus Sport for Good, with the primary beneficiary being Dibia DREAM, which uses STEM and recreational education to help underserved youths in Miami. The charity’s CEO, Brandon Okpalobi, also had a watch up for sale in the auction: His white ceramic Pilot’s Watch Chronograph Top Gun Edition “Lake Tahoe” went for $15,000. The same model worn by the former NFL running back Marcus Allen hammered down for $18,000, along with a signed football.