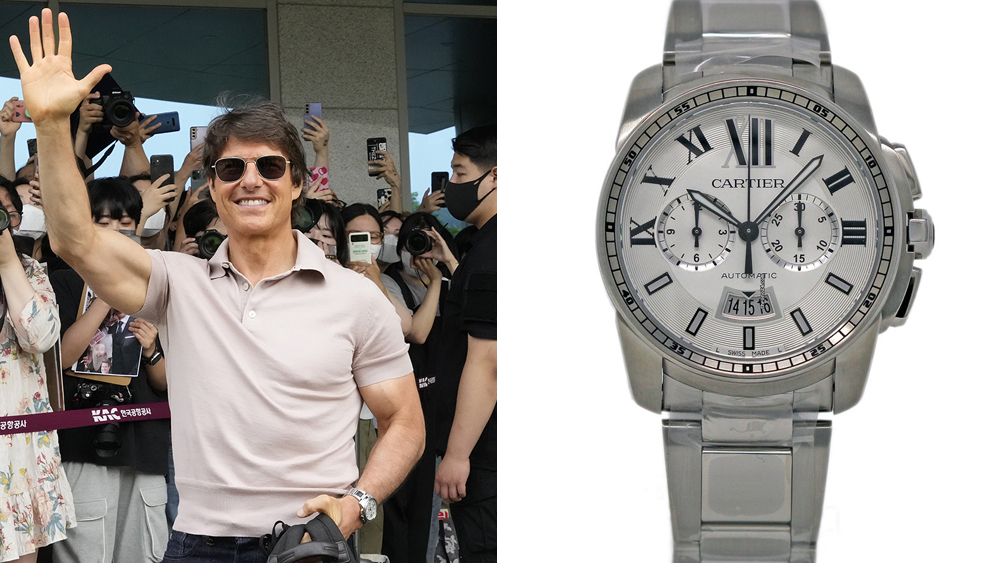 Movies are Tom Cruise’s true passion, but he cares about other things, too. Like watches.

The Top Gun: Maverick star has taken advantage of the return of the multi-week, globe-spanning publicity tour to show off his horological taste. Last week, that meant wearing not one but two exquisite Cartier timepieces while promoting the blockbuster in South Korea.

The first of those timepieces, a Calibre chronograph, could be seen on the actor’s wrist as soon as he got off the plane at Gimpo Airport in Seoul. The watch was introduced by the French brand in 2010 and was its first powered by an in-house movement, hence its name. Unlike Cartier’s most famous model, the Tank, it features a round 42 mm stainless-steel case that is attached to a matching bracelet by some rather prominent lugs. Under its scratch-resistant crystal is a white face with prominent Roman numeral hour markers, luminous hands, 12-hour and 30-minute sub-dial and a date aperture at 6 o’clock. It has a power reserve of 48 hours and is water-resistant to up to 328 feet. No longer in production, it can regularly be found at online marketplaces, like Chrono24, for a little over $9,000.

Cruise displayed another Cartier, this time a Santos de Cartier, days later at a press event in South Korea’s capital city. Unlike the Calibre, it has the rectangular shape that the brand’s watches are most commonly associated with. The timepiece, which GQ notes was designed at the behest of pilot Alberto Santos Dumont, has a 39.8 mm stainless steel case that houses a silvered opaline dial with Roman numeral hour markers, blue sword-shaped hands and a date window at 6 o’clock. At its heart is the calibre 1847 MC automatic winding movement and it’s also water-resistant up to 328 feet. Unlike the actor’s other watch, it’s still in production and is available directly from the brand for $7450.

Cruise may have only worn Cartiers in South Korea, but he’s not a one-brand timepiece kind of guy. When Top Gun: Maverick premiered at the Cannes Film Festival in May, an ultra-thin Vacheron Constantin peeked out of the cuff of his tuxedo. And in the film itself, his titular character can be seen wearing a Porsche Design chronograph.