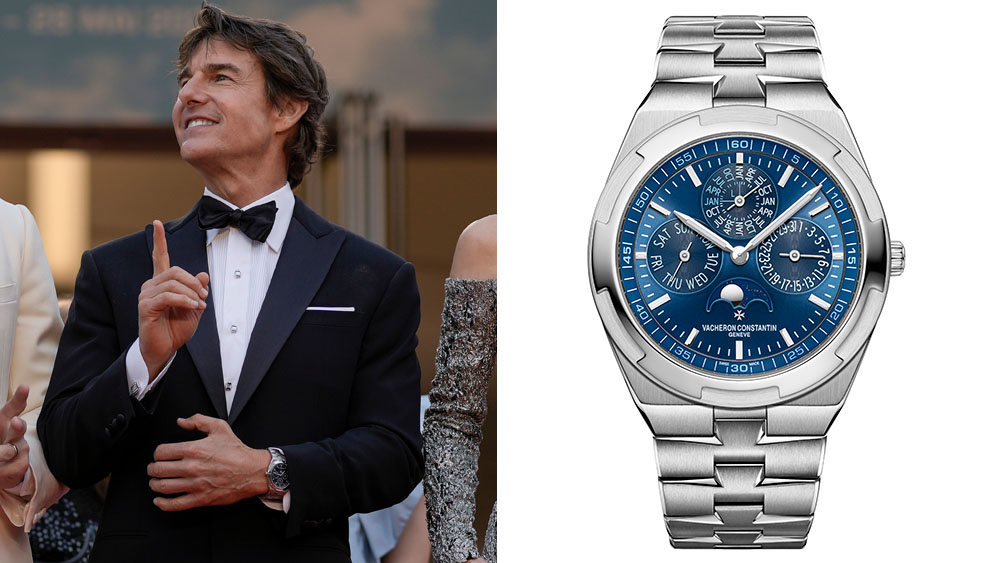 Finding a watch that works as well with black tie garb as it does with a sweater and slacks might be impossible for some guys. But Tom Cruise made it look easy.

Whether he was walking the red carpet in a tuxedo or discussing his career before an audience of film lovers in more casual fare, the Top Gun: Maverick star could be seen wearing a Vacheron Constantin Overseas Perpetual Calendar Ultra-Thin at this year’s festival. It’s easy to see why; with its combination of substance and style the timepiece is about as versatile as they come.

Although it wasn’t officially released until 1996, the model’s roots extend all the way back to the 1970s. That was when Vacheron Constantin introduced the Ref. 222, its answer to the Audemars Piguet Royal Oak and Patek Phillipe Nautilus. Like its peers, the 222 was a radical departure, much sportier than the dressy timepieces the Swiss watchmaker had been known for up until that point. The watch has been revamped a few times since its initial release a quarter-century ago, but it remains what it has always been: a timepiece that is at once athletic and elegant.

The ultra-thin variant of the watch that Cruise was wearing at Cannes is just 8.1 mm thick, making it the perfect accompaniment to the tuxedo he wore to the Top Gun sequel’s premiere at the festival (where the film received a five-minute standing ovation). The $102,000 chronograph features a 41.5 mm case made from 18-karat white gold, an integrated bracelet and a sunburst blue dial with a moonphase complication at 6 o’clock. Keeping everything running is a complex perpetual-calendar movement that ensures its three sub-dials—which display the day, date and month—are accurate for the next 78 years, even if you forget to adjust them.

That last feature could prove to be particularly useful to Cruise, who was only at Cannes long enough for the premiere of his latest blockbuster and to accept an honorary Palm d’Or award. Shortly after, the actor jetted off to Japan for the nation’s premiere of the new Top Gun and will almost certainly make an appearance in the US later this week before the movie opens in theaters this Friday.

It’s hard to think of a better watch for someone perpetually on the go.