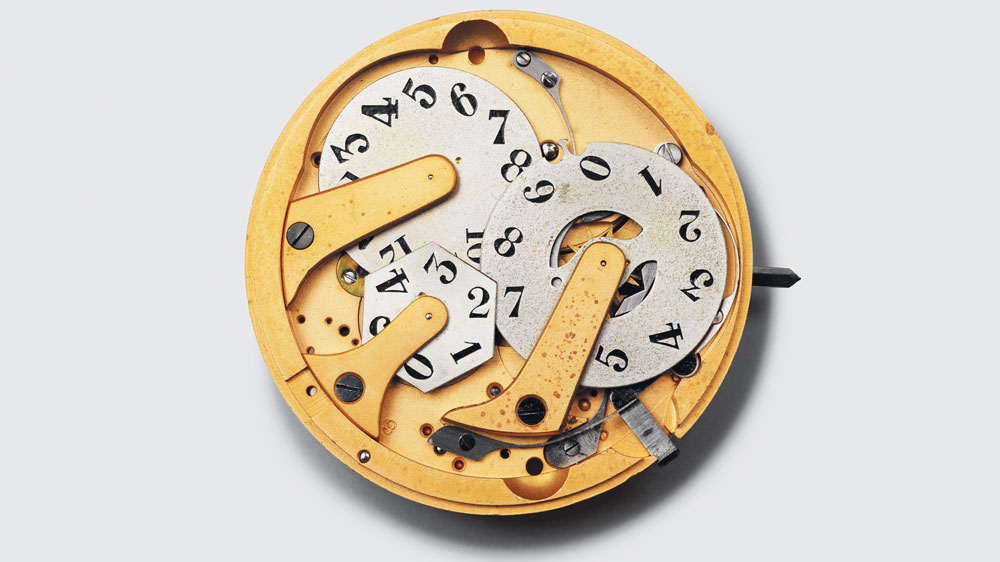 Announcing the new Pulsar Time Computer in the early 1970s, the Hamilton Watch Company advertised its pioneering electronic digital watch as “the first completely new way to tell time in 500 years.” It became an instant icon. With a bright-red LED screen activated by a button, the Pulsar captured the imagination of a public that associated computers with hulking mainframes. The $2,100 timepiece was soon spotted on the wrists of technophiles both real and imagined, from President Gerald Ford to James Bond.

But serious watch collectors knew that Hamilton’s boast was bogus. The Pulsar’s quartz-calibrated microcircuitry was unprecedented, but mechanically actuated digital time displays could be traced back to pocket watches from the 1830s, and mechanical digital wristwatches appeared as early as the 1920s. The first completely new way to tell time was in fact a novelty many times over. And each time—as Hamilton would learn at great expense when the market was swamped with cheap imitations—the trend passed in a flash.

We are now in the midst of another major comeback, not only with the onslaught of smart watches but also with the debut of innovative new mechanical timepieces such as F.P. Journe’s Vagabondage series and the A. Lange & Söhne Zeitwerk. Although history tells us to be wary, present-day watchmakers—at least those building movements with gears and springs—are familiar with their digital forebears as never before, and the past is actively informing new creations. After nearly two centuries of serial reinvention, digital may finally be emerging as an authentic tradition.

The first major episode in the history of digital time indication foreshadows the Pulsar moment in both boldness and disappointment. It was 1881, and the International Watch Company was in need of a standout product after struggling for more than a decade to establish a market. Somehow the new owner, Johannes Rauschenbach-Schenk, learned of an invention by an Austrian father and son—both named Josef Pallweber—and decided that their mechanism could turn his business around.

The invention was an under-dial module for digitally displaying the time on a pocket watch. Digits were painted on discs visible through windows on the watch face, with hours on the top and minutes on the bottom. Instead of turning gradually, the discs jumped every 60 seconds.

Although Abraham-Louis Breguet included jumping hour hands on some pocket watches in the early 19th century, and companies including Le Roy used numbered hour discs as early as 1830, the Pallweber system was the first to combine these ideas in a fully digital time indication. “It was a radical new way of showing the time in a time of technological change,” says IWC museum curator David Seyffer. “Mr. Rauschenbach had to have it, and he paid a hell of a lot of money for the patent.” The overall investment, including the cost of putting the watches into production, was more than $10 million in today’s money

The digital pocket watch saturated the market, with variations from top makers like Cortébert, Minerva, Wittnauer, and Lange  Photo: Courtesy

Initially it looked like Rauschenbach had made a good bet. The timepiece was marketed as “the watch without hands,” and the IWC workshop couldn’t keep up with demand. But the mechanism proved more difficult to manufacture than Rauschenbach envisioned. The discs took considerable energy to turn because they were heavy and friction was required to hold them steady. At first the total running time for a Pallweber was less than 24 hours. Although dozens of changes in design and materials incrementally improved performance, manufacturing of the testy movements remained inefficient. Around 65 percent of each mechanism for the men’s Pallweber had to be crafted by hand. As a result, production of a Pallweber cost the company nearly twice the outlay for an ordinary movement. “They had huge plans to capture the whole U.S. market,” says Seyffer. With limited manufacturing capacity and high expenses, they never stood a chance.

Meanwhile other companies caught on to the digital trend and started to engineer their own mechanisms. These look-alikes took Rauschenbach by surprise, even more than the difficulty of putting Pallwebers into production. “He really believed that the Pallweber patent protected the digital way of showing the time,” says Seyffer. “Judges all over the world ruled that the patent only protected the mechanical means.”

Over the course of the 1880s, the market was flooded. By the tally of watch historian Alex Kuhn, more than 36 distinct movements were produced by 11 manufacturers, including Cortébert, Minerva, Wittnauer, and Lange.

During this period, operating in an increasingly crowded market, IWC was able to sell an estimated 20,000 timepieces. “But then suddenly in the 1890s, digital displays weren’t fashionable anymore,” says Seyffer. “People went back to the traditional way of telling the time.” IWC and other companies ceased production. A bitterly disappointed Rauschenbach turned his attention to precision chronometry, and the futuristic watch without hands was unceremoniously consigned to the past.

In the early 20th century, people started to process time in a strikingly new way. Advocates of scientific management decreed that work hours should be strictly apportioned, and employees should be carefully monitored so that their labor could undergo cost analysis. Employees themselves facilitated this modern form of capitalism by punching in and out on mechanical time clocks. At least twice a day, they saw a digital time stamp on their punch cards.

Although the primary manufacturer of time clocks was the International Business Machine Corporation of New York, the development did not go unnoticed in Switzerland. In the early 1920s, Audemars Piguet began making wristwatches with a digital time indication. “The company was always interested in what was most modern,” says Audemars Piguet historian Michael Friedman. “And time clocks were the most prolific clocks of the era.”

So began another digital watch fad, apparently oblivious to the Pallweber mania of the 1880s. This time the jumping action was confined to the hours. (The minutes were also displayed on a disc, situated below the hours indication, but that disc rotated continuously.)

As Friedman observes, the system was essentially equivalent to a traditional calendar mechanism. “It’s a matter of under-dial work, of cadrature, which was very well established in Vallée de Joux watchmaking,” he says. Unlike the Pallweber movement, which was a genuine technological breakthrough, Friedman views the Audemars Piguet digital display as “a design-driven innovation.”

The modern design aesthetic was applied to every element of this timepiece. Rectangular in form, Audemars Piguet jumping-hour watches were distinguished by bold Arabic numerals and angular Art Deco cases. They looked like machines. That was no accident, observes Friedman: “Watches are not siloed objects, but are part of the culture.” The reciprocal relationship between the era and the digital time indication made digital watches enormously popular up until the Great Depression. (In addition to Audemars Piguet, Deco-styled jump-hour watches were produced by companies ranging from Rolex to Elly.) And then, as the stock market crashed, they vanished once again.

As an apprentice to the famous clockmaker Johann Gutkaes in the early 1840s, Ferdinand A. Lange worked on an unusual clock for Dresden’s opera house. The clock showed the time digitally, with jumping hour and 5-minute indications arranged horizontally, foreshadowing the horizontal display of time made commonplace by the Hamilton Pulsar and its electronic-​digital successors.

More than a century and a half after the Semper Opera House opened, A. Lange & Söhne decided to develop a digital wristwatch inspired by Gutkaes’s clock. Unlike the modestly sized two-tier digital displays of antique watches, the company sought a horizontal display with very large digits. The watchmakers were well aware of the challenges they faced: the problems of Pallwebers writ large. “Instantaneously moving big discs every minute requires a lot more energy than moving hands,” says Lange director of product development Anthony de Haas. A powerful spring is needed. “But if your mainspring is too strong,” he explains, “you can’t power an escapement with it.”

Beneath the surface of the Zeitwerk from A. Lange & Söhne is a complicated legacy of movements taken from the brand’s early pocket watches.  Photo: Courtesy A. Lange & Söhne

In search of a solution, de Haas researched the past, in particular Lange’s own legacy as a manufacturer of digital pocket watches. Lange technicians made computer simulations of new movements based on the Pallweber and also the Dürrstein system, which was the mechanism Lange used in the 1880s to circumvent IWC’s Pallweber patent. The Dürrstein showed promise, says de Haas, as it had the advantage of running the digital display on a separate gear train. But he found that it consumed too much power. Instead he opted to ditch digital precedents completely, learning from their inadequacies.

The mechanism he developed adapts the classic remontoir d’égalité. It uses a mainspring twice as powerful as normal, but the power is conveyed to a secondary spring every minute, as the discs jump. The secondary spring powers the escapement for the next 60 seconds. “You not only have a watch that indicates time digitally,” de Haas says, “but it’s also a very precise watch because it has constant force.” Released in 2009, the Zeitwerk has subsequently undergone numerous permutations—including a decimal chiming mechanism—further exploiting the remontoir’s energy distribution.

Concurrent with Lange’s developments, other contemporary watchmakers have revisited the history of digital watchmaking, resulting in other innovations. One of the most unconventional is F.P. Journe.

Since 2004, Journe has systematically explored combinations of digital and analog time display with his Vagabondage series, taking inspiration (and forewarning) from digital pocket watches in his personal collection. “The mechanisms of antique pocket watches with digital indications are really catastrophic mechanically,” he says. “Much precaution is needed to avoid the numerous traps.” He ultimately overcame the problems of accuracy, and the related challenge of providing sufficient power, by developing his own remontoir d’égalité.

With the Vagabondage II of 2010, the mechanism imparted constant force every minute, equivalent to the Zeitwerk. This year Journe used the same system to release energy at 60 times that rate, one revolution per second, creating the world’s first mechanical timepiece with digital seconds.

Beneath the surface of the Zeitwerk from A. Lange & Söhne is a complicated legacy of movements taken from the brand’s early pocket watches  Photo: Courtesy A. Lange & Söhne

The range of digital displays and mechanisms that have appeared over the past decade is unprecedented, with recent novelties released by companies including Hublot, Chanel, Hautlence, and MB&F. Michael Friedman is not surprised. “We’re moving deeper and deeper into the digital age, and these analog watches that flirt with digital aesthetics are appealing to contemporary collectors,” he says. “You know something is gear driven, yet the display is incredibly futuristic and contemporary. That’s an exciting dichotomy.”

Over at Lange, de Haas holds a similar opinion. He’s observed that the Zeitwerk has been especially popular with the business leaders of Silicon Valley and technophiles more broadly. “The younger generation is accustomed to digital displays,” he says. “It’s how they see time.”

Ironically, the Hamilton Pulsar may have made possible the transition of digital-mechanical timekeeping from trend to tradition, by priming the revolution that made quartz-based digital time indication ubiquitous.  The Pulsar was not the first completely new way to tell time in 500 years—but the Pulsar age was the first to free mechanical watchmakers to pursue watchmaking for its own sake.