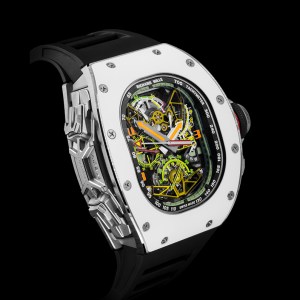 When I started this project, I was not an expert on mechanical watches,” admits Sylvain Mariat, head of creative design for Airbus Corporate Jets (ACJ), who collaborated with Richard Mille to develop the new RM 50-02 ACJ Tourbillon Split Seconds Chronograph. Mariat, who normally designs custom interiors for Airbus’s elite customers, could not have had a more auspicious introduction to watchmaking. Not only is the $1.05 million tourbillon (which is limited to just 30 examples) one of the most expensive watches Richard Mille has produced to date, but the project also marks the first time the company has involved an outside designer so intimately in its creative process.

The collaboration, which began with a friendship between Mille himself and ACJ president Benoît Defforge, blossomed into a full-fledged partnership when Mille visited the Airbus plant in Toulouse, France. “Richard is very curious by nature, and at the beginning he wanted to see everything,” recalls Mariat. “He was very impressed by the technicity of the engine pylon. It’s a very complex structure, with electricity and hydraulics as well as structural supports. He asked if our customers knew there was such a beautiful product inside the airframe.”  By the end of the day, Mille and Defforge agreed to cooperate on a new project of mutual interest, and Mariat was assigned the ambitious task of delivering sketches of a Richard Mille Airbus watch within a mere 2 months. “I started by looking at all Richard’s watches, trying to understand the mechanism and what we can do inside,” Mariat says. “I saw the tourbillon was like an engine, so together with my team, I looked through various Airbus structures to find a specific engine support for the tourbillon.”

He coated the tourbillon’s support structures and certain parts of the split-seconds chronograph mechanism with the same anticorrosive paint that is used to protect the engine and chassis parts. Colorations and typography were borrowed from the cockpit of the latest A350. Small details, such as the use of aeronautic screwheads, capture the spirit of Richard Mille’s watchmaking aesthetic—touches that doubtless contributed to Mille’s quick approval of the concept and Mariat’s subsequent 2-year collaboration with the brand’s technical office to finalize the watch. “The fact that you can run your hand over the bezel and crystal without feeling anything perfectly reflects the spirit of aeronautics,” Mariat says. “When aircraft specialists see the watch, they will recognize the spirit of Airbus.”